@Jan_Koudijs & @Bluebeat ----- Thank you for the follow ups and taking the time to answer my questions. Both are appreciated.

Marc, I see you are noticing this same behavior while using the Oneplus device as well. @Jan_Koudijs, I know you mentioned early on that you did not have this issue with the Nexus 7.

Hi @Eric,
No, the Discover feature works fine on my Oneplus One. See my first post in this thread.
Marc

@Jan_Koudijs, I know you mentioned early on that you did not have this issue with the Nexus 7.

Indeed @Eric, Discover works fine on the Nexus 7 in phone mode. I do not have other wireless remotes, but I did a few tests yesterday:

I changed the density setting of my Nexus 7 (from 320 to 240 dpi) as described in this post:
https://community.roonlabs.com/t/lenovo-yoga-stuck-in-portrait/10749/33
With this change Roon starts in tablet mode. When I open the Discover screen, now it is slow as well. It takes even a bit longer than on the Pixel C, probably caused by the more limited resources.

Then I switched to the network. I made a direct wired connection from the PC to the router (Linksys E2000), no change.

Next was the WiFi. I switched from Mixed to N-only, from 2.4 GHz to 5 GHz, tried different channels but no change in performance. Typical distance from tablet to router is 4 meters, also tried within a meter but no change. The reported link speed on the tablet is 144 Mbps.

Also tested the WiFi performance by viewing a video on YouTube, typical quality is 1080p50 sometimes switching back to 720p50.

Should this performance be sufficient for the images transfer?

I will send you the requested logs later today.

Marc (@Bluebeat) ---- Thank you for clarifying.

I performed a WiFi speed test, average speed is around 40 Mbps.

Hi @Eric, any news about this issue?

I was able to increase my network speed to 100+ Mbps, but no change in performance

Hi @Jan_Koudijs – this issue is with me and I’m doing some testing to see what we can do here.

My sense is that this is a more general performance issue with the Discover screen, and that it’s particularly bad on Android. We’re going to see if we can confirm that, but it will take some time for me to gather information about the performance of various devices and platforms, and get this into an actionable bug report for the team.

We’re working on it, so apologies for the inconvenience and thanks for your patience.

Thanks for getting back to me. Good to know that this issue is under investigation.

In the mean time, I am working on a performance update of my system. Yesterday I installed a new 802.11ac router and replaced my ethernet powerplugs by a cable. The result is that the network speed from core to remote is now around 350 Mbps. Today I ordered an M.2 SSD, on which I at least will place my Roon database (now still on a HDD).

When all this is up and running I will let you know what the effect on the performance is.

@Jan_Koudijs … in Dutch, just for once …

Unfortunately they delivered the wrong SSD, so it will take a little longer before I can report the results

It has taken a while but last Friday I received my SSD. In the mean time I also bought a NUC and DDR4 memory, so last weekend I had all the necessary parts and moved my Roon Core from the PC to the NUC.

The increased performance has no impact on the load time of the Discovery screen, it behaves just the same. Not fully unexpected after the comments from Mike and Marc.

@mike, I can’t think of anything else I can do, do you already have something to report?

One other observation:
In the old situation I switched the PC off at night, now I leave the core running 24/7. This has a huge impact on the battery life of my tablet if I don’t close the Roon app. It drained the battery over night from a 50% charge, so I now really have to close it at the end of the day (I used to have a battery life of 1 week). I don’t know if this difference is caused by the lost connection or that the app crashed as a result of the core that went down (most of the times the app restarted the other day, so maybe it’s the latter).

Here is the graph of the battery life for the described case: 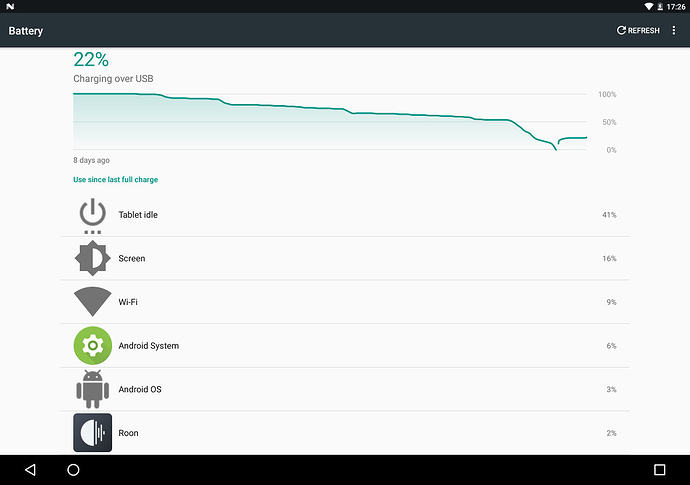 Also the update to Android 7.1.1 doesn’t make a difference.

Hi Jan, you asked me to respond to this thread with my experience of the Pixel C so here are my observations. I have occasionally seen the missing letters issue using my Pixel C. Restarting the app fixes it. I have yet to see the greyed out pictures or any other signs of incompatibility. I would rate my experience as good but I am coming from a tablet with insufficient resolution to work in landscape most of the time and poor battery life.
For information my AV and Audio streaming devices are all hard wired, only phones and tablets use wifi. My Broadband connection is respectable at 30 down, 6 up most of the time. Looking at the wifi spectrum there are 3 strong signals on my channel but nothing that can crash my wifi. I hope this helps. I have only used 7.1.1 after an update on first switch on.

Can I throw in a couple of issues I have been seeing with Nougat and Pixel launcher on my Samsung tablet.

First, the app seems to run in the background - if I close the app after a listening session, it seems to still be there. A clean closure of the app would be nice.

Second, I keep getting the ‘Roon has closed’ error (also in previous Android versions), I will try some of the suggestions around battery etc in the thread but it wouldn’t bother me as much if it didn’t do through the day when I thought the app wasn’t running.

Finally, I can’t get the search window to stay open. I tough the search icon, and the window opens, but as soon as I try and go into the window it closes (or moves to the back maybe?). It could be a display scaling issue as I use the ‘display’ setting in the pixel launcher to get three albums deep in my album view.

Hi @Henry_McLeod, thanks for answering my request!

Overall I agree that the experience on the Pixel C is good. I only find it hard to belief that the Discover screen, which is a primary feature of Roon, can’t operate more smooth on this Device.

Also in my case all connections are wired except the tablet. I even tried a wired connection to my tablet by using a USB-C to Ethernet adapter (1Gb), it doesn’t improve the load time. If I select Discover from the menu I have to wait for about 30 seconds before the page is fully loaded. this is so slow compared to all the other screens…

I don’t use the discover screen but after reading your account I used it. It took about 30 seconds to respond with a useable display the first time. Thereafter it takes around 10 seconds. It is the slowest responding screen. I might take a look using other devices.

Would be nice to have some comparison times for different Android devices.

Anyone who can provide the load times for a Samsung Galaxy Tab S2? (the other option I considered when I bought my Pixel C)

@Jan_Koudijs In my environment on 5Ghz network with no other traffic on that band, it it 3 sec, for the page to display minus a couple pictures, 9 seconds and all the pics have been filled in.

Thanks @Rugby, that’s quite a difference. Now I at least know what to aim for.

Just to chime in on this topic. I have the same issue on my Samsung Tab4 tablet running android 5. I just came back from a long trip and started up my audio equipment (Roon Server etc.) Immediately the app suggested an update to version 168. After the update finished and Roon restarted things went wrong. Lots of restarts needed, missing caracters etc. Before i had no problems whatsoever… It is very unfortunate because this tablet is my main tablet to run Roon in our livingroom/kitchen. I don’t have more devices running Android, but other devices running windows 10 are fine…