How can I see the bit & sample rates when I look at tracks (or albums) for both, files in my library as well as files streamed via Tidal?

Mine show on the display. I think you can do this in settings. This example is 24/192. CD spec says CD 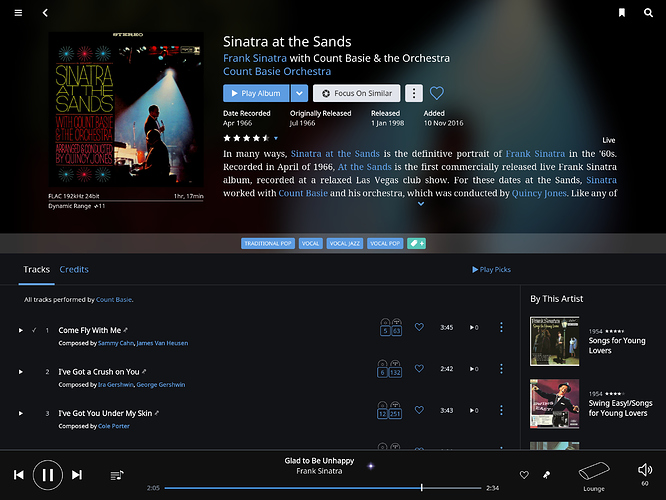 Thank You. I see, yes. I was expecting this under the track, rather than album.

But: I can’t see it for TIDAL albums. I thought that TIDAL had some high-res content beyond 44.1/16
I wanted to see if that is so and if it sends the full resolution to my DAC.
–especially, since TIDAL has some settings that determine what resolution to stream and I do not know how to tell TIDAL to stream what they call their “Master Mode” to Roon. In the Web Interface I can only set it to “HiFi”, even though I pay the extra $10/month to get the best quality. --confusing!

OK. Looks like I found some file on TIDAL where my DAC indicates 48/24. So it does seem to stream higher resolutions–nice!

Most TIDAL content is lossless, but not all, and TIDAL content can change on-the-fly as they source lossless copies, or MQA copies, etc… So we don’t actually know the quality with certainty until you hit Play and the stream starts.

Once playback starts, you can always check Signal Path.

Got it. Awesome. Thanks, Mike!

This topic was automatically closed after 21 hours. New replies are no longer allowed.