I have bought a 7 inch display
This one http://www.lcdwiki.com/zh/5inch_HDMI_Display-B

RoPieee only supports the official Pi 7” display, and HDMI is disabled.

Not using Ropieee. You might be able to cobble an alternative solution together but there is no simple way to do what you propose.

To use a roon endpoint a roon player

Practically a set top box roon player with his own display.
I have roon server in my nas

RoPieee only supports the official Pi 7” display, and HDMI is disabled.

I believe RoPieee supports displays that use the DSI (Display Serial Interface) interface on the rPi board. So you don’t necessarily need the “official” rPi display if you want something other than a 7" display. For example the Orchard Audio guys are using a 5" display in their newest product and it is working with RoPieee.

That said, the only way to be sure you will have support in the future is to use the official rPi display. It’s a nice display and worth using BTW.

You could try a OS like DietPi with a graphical interface via HDMI. Then use the web page option to get a display. The problem you have is Ropieee very specifically disables HDMI and only works to the official 7 inch display via a ribbon connection.

Exactly the orchard guy is using a non official rpi display.
So it is possible.
I will try

@guglielmo_piccioni, may I ask, what is the reason for the reluctance to use the 7" Pi display? Is it cost, eg too expensive? Wrong size?

It goes without saying that RoPieee is designed and intended as an “appliance”, so is not the best choice for tinkering or non-supported uses. Caveat emptor.

You might have some luck with volumio and running roon bridge on that, but I don’t think you will get a roon display per se like ropieee provides

”, so is not the best choice for tinkering or non-supported uses. Caveat emptor .

cause I have already bought an HDMI display

cause I have already bought an HDMI display

That’s a non starter with ropieee, you have no hope there. You will have to try something else that will run roonbridge like volumio, moode, etc. None of them will give you the display and touch interface that ropieee has though.

I know it’s unsupported, but I just bought this and am super stoked with it.
Waveshare 4.3 Inch DSI LCD Display For Raspberry Pi

Much smaller and preferable than the official 7" screen, but works natively without drivers (at same resolution) and Ropieee can’t tell any different. I’ve now got 2 Ropieee’s with screens (one official and one not), but definitely prefer this unofficial 4.3" version. Not only is it smaller and more compact for a quick reference, but it’s got a much wider viewing angle and looks miles better from side on.

Just ordered one. I’m building a RoPieee powered streamer (or I would if I could get Soekris to take my money!) and I don’t want it all in a giant case because of the 7 inch screen.

What case or screen mount do you use?

I’ve seen it on Amazon included with a nice compact case, but I didn’t choose that because it rules out any HAT options and mostly because I want to angle the screen. right now it’s sitting on my desk on its risers, but I’m planning to make something for it.

Could you simply drill some holes in the bottom of a FLIRC case and cut a slot for the ribbon cable?

Technically yes (that’s the only connection to the pi required) but the lcd is slight larger than the pi and designed to have the pi mounted to it. More importantly it doesnt have any housing itself so you’d see light bleed etc. Right now I’ve done a very nasty job sticking it back in its delivery packaging with similar problems. Nest Hub gives some reference size. 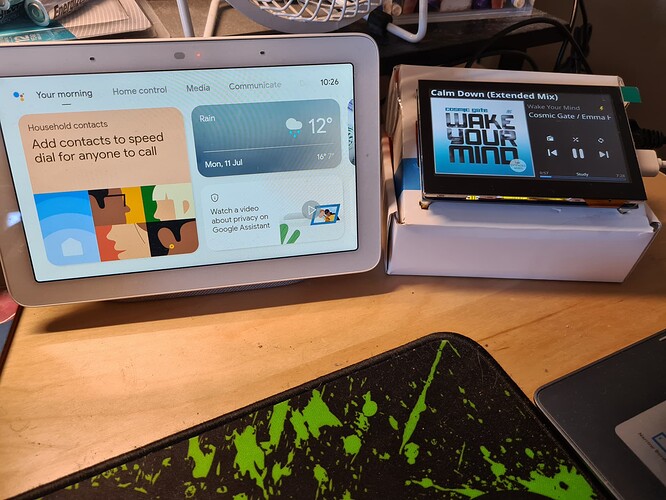 I’ve just noticed, having entered the room in the dark, that the backlight doesn’t completely turn off even when the display goes to screensaver. I guess that’s one of the gambles of a non-official screen. For some people’s use-case that would be a real problem, but for mine (sitting on my study desk) it’s not terribly relevant and I took days to even notice it was happening because in daylight it looks pretty much black.

I may eventually put this pi on a switch so I can turn it off overnight (mostly due to a desire not to waste power needlessly than any real impact of the dim backlight in an empty room).