Now that Roon 1.5 has a Versions tab, is displaying ‘duplicate’ (in red even) obsolete?
Or does it still have a function? If not I don’t want to see it. 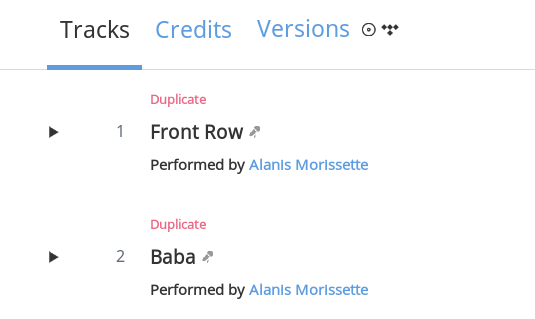 I think it’s because there’s a difference between “Versions” and “Duplicates”.

I’m only seeing the red “Duplicate” appear on tracks in albums where there are genuine duplicates in my library (e.g. a stereo and a 5.1 version of the same album)

The problem with Duplicate is it looks so untidy to my eyes.

I agree with Chris. All that duplicate means is that it’s not the primary version. I would prefer if the Primary version were discretely marked somehow. The repeated red lettering is a bit frantic.

Have some in both alac, wav and flac. Doesn’t show up nicely with this red warning.

In this case it’s a mqa version (tidal) and a redbook version (local), so no genuine duplicate

Are you guys considering removing this in a future version? Personally I really dislike it and would love to be able to disable it if I could.

I’m just a user and a volunteer mod, part of the Community rather than Roon Staff. I’m expressing my personal view here so don’t read too much into it. I wish I was that influential !

I would prefer if the Primary version were discretely marked somehow. The repeated red lettering is a bit frantic.