Distorted USB audio with Tinker Board and DietPi

There is a thread discussing this matter but not from a DietPi perspective, so i thought i’ll reach out to @Dan_Knight for some assistance.

DietPi install is just fine and Roon Bridge installs like a charm. But, USB audio out is heavily distorted and stops afte a couple minutes.

The one in bold was reported to be the culprit if i understod correctly, which is not sure at all…

These should go in /boot/cmdline.txt, right? It seems no changes are allowed in config.txt anymore.

The available file for command line boot options is:

However, i’am unsure as to whether the dwc commands will be supported/applied. Needs testing.

There are some kernel updates for the ASUS TB, that may improve USB audio quality, but i’ve not been able to get round to testing yet. Its on my list

Thank you for the input Dan, unfortunately this didn’t help the USB Audio…
Actually i cannot get any audio out of the 3.5mm headphone jack either.

Having a look at JustBoom and the Alsa Mixer gives this, for each available output (Black Dragon, USB Audio and Rockchip) 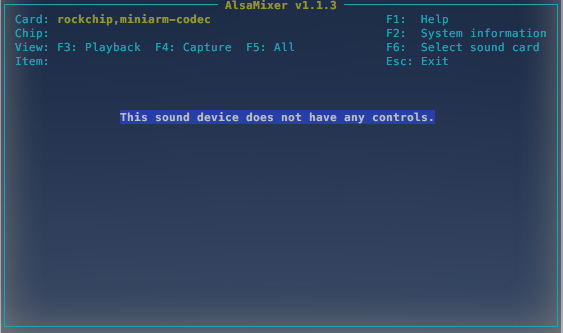 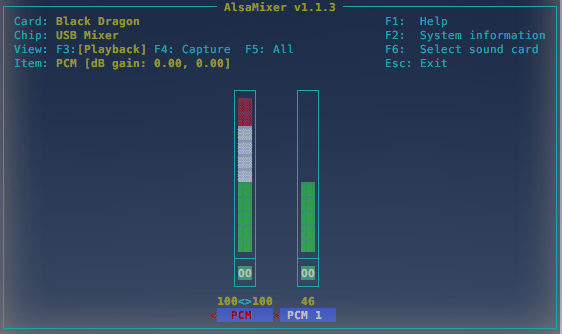 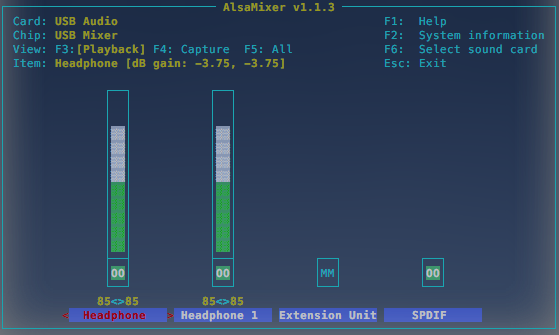 I dont know if this is of any help, but i’ll will gladly tinker around if i can be of any service.
Oh, and i got audio to work through USB when i tried Volumio’s image for the Tinkerboard. However i dont like that very much.

Oh, and i got audio to work through USB when i tried Volumio’s image for the Tinkerboard.

Most likely updated kernel (ours is a few months old now). I’ll make a note to update our image with latest, see if that helps resolve.

Please let us know if this improves USB audio.

Thank you for the swift response Dan!

And the new image improved audio a LOT! Now it is completely listenable. However, there are still ticking noises in the audio stream, worse when increasing samplerates

Previously i couldn’t get any info on the currently playing audiostream but in this version i can, got this when playing some redbook material:

Does the period and buffer size look reasonable? There are way different figures when looking at my Raspberry Pi 2B with Audiophonics SabreDAC:

For comparison, my nanoPi Neo (Which works beautifully with DietPi!):

Normally we can increase buffer size with asound.conf, however, Roon ignores this file and attaches directly to the hardware device.

Have you tried increasing the buffer size in Roon? It may have an effect on the ALSA buffer size, although, not sure.

Another option is to increase NRpacks:

Thanks once again Dan for your support!
I have played a bit with the buffer size in Roon audio settings and it seems to affect the amount of ticks in the audiostream, less buffer (25ms) more ticks, more buffer (500ms) fewer ticks.
With the buffer set to 500ms and playing back RedBook material there are hardly any ticks at all and it sounds really nice! If i activate upsampling to “PCM, power of 2” the ticks become really annoying and way more freqent than if i lower the buffer to 25ms.

Not sure the nrpacks did anything really? And i cannot cat anything for your suggested path, there are no “nrpacks” available (after reboot)

The buffers seem to have been increased though, but these are directly related to the set buffer size in Roon Audio setup for the device:

I’m experiencing a similar issue (small pops and clicks) using the Asus Tinker Board, DietPi 1.55 with the 4.4.71+ kernel, and a Chord Mojo, streaming into RoonBridge.
If I try to convert in Roon to 768KHz or DSD64 it becomes unlistenable.
I’ve also played around moving everything to the first 2 cores except RoonBridge, to which I’ve left the last two; this didn’t help.

A couple of hours ago I’ve set up a RPi3B which worked without issue; the only difference was the hardware.

Appears the Roon buffer has a direct impact on ALSA stream buffer and period size:

Yep, appears this value does not exist, unsure why at the moment.

Believe the otg options need to go into /boot/extlinux/extlinux.conf

I have just tried this (see below) and the pops and clicks are still present unfortunately.
I’ve also tried with nrpacks=40, which seemed to be worse, and 10, which seemed to not make much difference from the baseline, but these observations are pretty subjective.
@Mikael_Ollars, did you have a different experience with this?
Btw, the /sys/module/snd_usb_audio/parameters/nrpacks does not show up after adding nrpacks to the kernel command line.

Please let me know if there are other things I could try!

Appears the Roon buffer has a direct impact on ALSA stream buffer and period size:

Yep, i saw the same thing and corrected my previous post.

I have just tried this (see below) and the pops and clicks are still present unfortunately.

I performed the suggested change to extlinux_conf and rebooted

My experience is shared wih @Radu_Popescu, that is no clear difference in amount of ticks…

Thanks to both of you for your input on this! I am using an Audiobyte Black Dragon which is very stable on its USB input. Where my Chord Mojo pops and stutters on DSD and sometimes on PCM >700Khz (on all Bridges i have tried, but more on my SBC’s) rates the Black Dragon is exeptionally stable.

Oh, i forgot to mention;
Very subjectively i have a feeling that when playing back @44.1Khz through the Tinker Board the audio result is a bit “jittery” or nervous. I hear somewhat spotlit sibilances and similar “digital” artefacts that are mostly invisible on Raspberry Pi2/3 and Nano Pi Neo.
Other than that the audio is detailed and dynamic, seemingly very good potential for this board if we can figure this out!

Thanks for the update Mikael.
When connected to my laptop, my Mojo has never had any issues with playback of anything including DSD. On the RPi3 I have only tried standard resolution yesterday, as soon as I get another micro SD I will be able to switch between the two SBCs more easily.
Just in case this was not clear: the onboard audio works just fine on the Asus, tested with the same music, same headphones.
@Mikael_Ollars, does Volumio not show these issues?

Just in case this was not clear: the onboard audio works just fine on the Asus, tested with the same music, same headphones.

Which audio output do you select in Roon to get audio directly? I havent been able to retrieve anything from the built in 3.5mm jack…

And no, i didn’t hear any pops and clicks with Volumio, but on the other hand i; 1. did not upsample anything 2. Didnt actually listen to one whole song before i got fed up with the interface…

And, like you i havent got a spare microSD to test simultaneously…

I don’t know anything about Volumio, I thought you ran RoonBridge on it as well?
Here is the headphone out setup, see images.
Weird how 88.2 is missing, isn’t it? 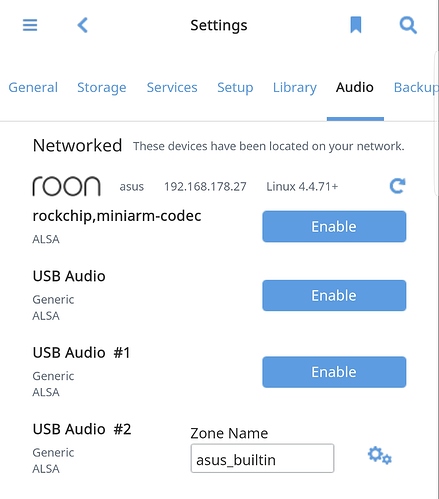 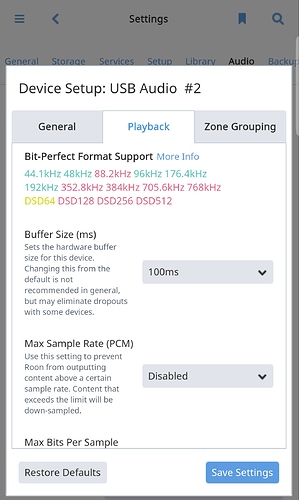 Thanks for testing.
The only thing I can suggest is to try adding all of these to kernel command line options.

Failing that, its most likely a case of waiting for kernel related fixes from ASUS, to improve USB stack.

There was no change in behaviour with the other otg-instructions.

I wanted to have a look at what Volumio could offer so i installed the Roon Bridge on the Volumio image. It is an older Kernel in use on this image, 4.4.16…

I’ll gladly report any data from the streams if this can be of any help in getting this to work on DietPi?

Unless I’m mistaken, these dwc_otg parameters are for a kernel module, right? If that’s the case, lsmod shows just the Realtek wifi module loaded (8723bs), and all of these parameters are not making any difference? To wit, the fiq_split_enable=0 should summon a line to appear in the kernel log, which it definitely does not; in fact, there’s no FIQ related stuff in my dmesg output.

Anyway, I have very interesting news!
I’ve used dietpi-config to set the cpufreq governor to ‘performance’, and the clicks and pops stopped. I’ve enabled DSP in Roon to see how much it can take and it can do DSD64, 128 and for a while 256; this last one I think is limited by the network bandwidth over wifi, and I’m sure it would work just fine over a wired connection (playback just stops, isn’t scratchy or glitchy).
At this point, the CPU frequency was shown to be 1800MHz.
For some reason the CPU reached 64C and then I think some frequency scaling kicked in, and it went to 1608MHz. At this point, the clicks and pops returned when playing even 16/44100.
I proceeded to install cpufrequtils, and created /etc/default/cpufrequtils with the contents:

and rebooted. I did all this because I’ve no idea how dietpi-config sets the governor and how/if it’s persisted after reboot.

So whatever the CPU frequency governor “performance” does, it does well, and the frequency isn’t the key; it’s a power state setting, or something else that affects latency. 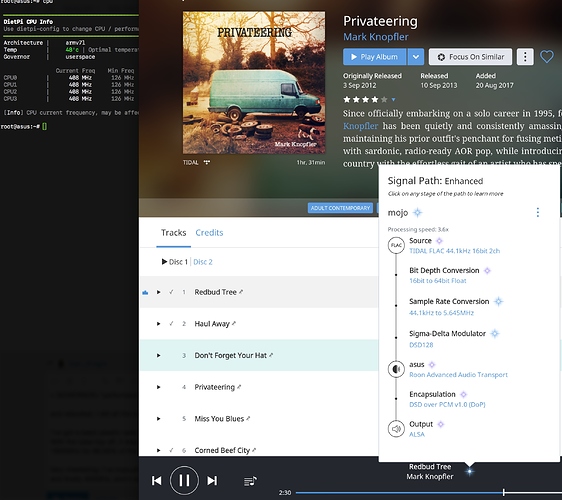