Does Roon do filtering?

Not sure about whether policy on this site allows to include the link but it should be easy to find it anyway.

Any ideas on this?

I don’t think there is a problem to refer to the article in the website.
So here is the link. You will need Google Translate to get it in English.
https://www.alpha-audio.nl/achtergrond/meten-aan-een-audiofiele-switch-deel-2/
Dirk

This is one for @brian I think.

This article has a scientific ‘feel’ to it. But is hasn’t got much to do with that, really…
They don’t make clear what they’re measuring, how, and why.
(Why would anyone measure the spectrum of an SPDIF output into the megahertzes, and what result would then be expected to be the ‘best’? What is the relevance to audio reproduction?)

I am Dutch spoken, so this is an easy read for me. But it hurts my eyes…

Back to your case : As long as Roon is showing the ‘lossless’ light, it is not altering or filtering your music in any way.
Easy to prove, has been done a number of times already, won’t do that again.

The author is measuring a chain of devices : Audio sample - > Roon -> Streamer -> DAC -> Measuring equipment.
Why is Roon questioned, but not everything else that follows in that chain ? Where are the measuments for each seperate part of the chain ?

Most, if not all graphs in that article tell me : the author is measuring the limits of his measuring equipment.
Not the limits of any of the devices under test. (Would certainly explain why all the graphs look so similar…

).
(It’s not clear, but looks like they used a Rigol. Which is not an audio analyzer, and not suitable at all for work SO incredibly low in amplitude…)

Did you make your concerns and remarks known to the Alpha-Audio team?

Interesting, thanks Marco. It was indeed the ”scientific feeling” (plus the fact I still have a basic recollection of Dutch from my two years living there in the early nineties) that got me interested in the first place. You are right pointing out that there are several elements in the signal pass besides Roon that might be causing this. Perhaps an official statement by Roon would be needed?

You may of course wait for an official statement. They have made that numerous times already… See for instance here : https://kb.roonlabs.com/Signal_Path . Lossless means lossless. No modifications whatsoever, and that is a guarantee.

If still in doubt : test for yourself. Stream a dtswav, and feed the digital output to a surround receiver. Make sure that roon volume is 100%, and that it indicates lossless.
Does your receiver now show dts on the display, and does it play sound ? That would be impossible, if anything at all was changed in the bitstream.
( You can test that, too : make any change. For instance lower the volume, or resample, whatever. Your receiver will no longer recognize the DTS stream, and will play noise instead).

@anon90297517 : no, nothing reported. Makes little sense. People believe, what they want to believe. And since we don’t have the details of what’s measured, I have nothing to disprove as well

The following is just for your peace of mind. (It really is a useless experiment, as its outcome was predictable before even starting it

I tried to re-do their measurement; the one that caused them to believe that Roon applies some sort of ‘filtering’.
Nothing fancy, but just performed ‘well’ this time. Without real professional equipment, but with proper thinking.

What you see below, is a 24 bit 44.1kHz WAV file. The file only contains a 882Hz sine wave, like they did, at 0dBFS (that means : as loud as it can possibly be).
That file is played back by Roon, indicating lossless. Output device is a semi-pro Audioprobe soundcard (DAC).
This output is then fed to another semi-pro Focusrite soundcard (=ADC), performing as the measurement device.
Cable between the two is a 5 meter jack-jack cable, normally used for electric guitars

The signal received by the ADC, is then spectrum analyzed with Arta software. FFT size was 131072, and a whopping 100 (!) takes were averaged to give as much as detail as possible.

(An observant reader will notice : Hey, your pic does not show the signal at 0dB/full scale. Why ?
You’re right - I had to lower the analog gain about 10dB, in order to minimize the distortion caused by the measurement itself.) 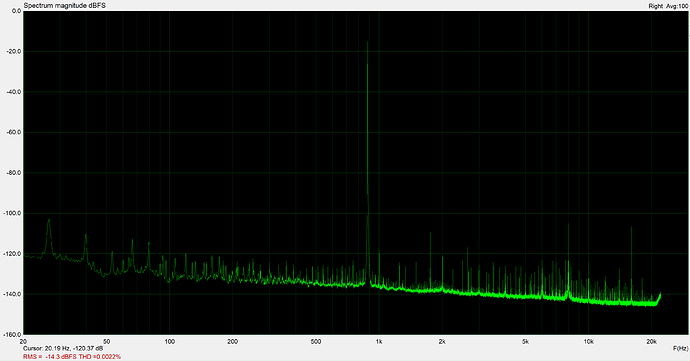 spectrum 882Hz roon audioprobe focusrite.png3605×1887 209 KB
Click the picture; the downsizing of the forum makes it hard to read.
What should be immediately obvious, is at least the following :

You should also know, that if I apply downsampling (and thus lowpass filtering associated with that) ON PURPOSE in Roon, this picture hardly changes at all,
Yes, I can see that proper filtering is applied in that case. Effects on the noise floor are minimal (can’t be fully avoided), and nothing like in the linked picture.

Summarizing : despite the fact that my measement is much, much, múch more detailed, it in fact shows LESS evidence of said misbehavior. Or any evidence of it, at all.

Thanks! As a matter of fact I have a series of test files (various resolutions) from my DAC manufacturer to test bit perfect reproduction which (all) “pass” the test

Well, there’s your ultimate proof then. Away with the worries

!
Roon’s capability to pass-through MQA would be another indicator by the way - that would never be possible if the stream were molested in whatever way. (Although I have never seen this by myself)

Ah well. Perhaps we now have something to link to, in case of future worries.

Neat and useful feature by the way, on-board check for bitstream integrity. Never heard of that before, but seems like a logical thing to implement.