I’m 3 days into my 14 day trial and enjoying things so far. Critical for me is that Roon and iTunes communicate. Thus far, the entire Playlist and Smart Playlist import activity seems to have worked. And, I’ve seen new music that was added in iTunes (and playlists) later appear in Roon as if it’s quietly and continually auto-checking for updates (good!). How often is that happening, btw?

But, does Roon push info back to iTunes in any ways? After day 1, playing music solely via Roon, I saw that the “last played” time stamps updated in iTunes when I checked the following day. However, they didn’t today. But then… they did, because:

I’m noticing that the credit for these updates appearing back in iTunes is more due to the way I use different apps (iSyncr and LastFM Scrobbler) to keep my Android phone and iTunes (Windows 10) in sync. I’m feeling lucky, since were Roon “last played” and “play counts” not making it back to iTunes, it’d probably be a “game over” moment for me, given how much I rely on last played dates to curate my Smart Playlists.

So, does Roon just not push anything back to the iTunes Library XML file? It is a pull relationship, only? This would answer many yet to be asked questions, if so.

While I’m awaiting a helpful reply

I thought I’d add that it seems the whole scrobbling of tracks’ last played data is wildly inconsistent, and never exactly accurate. Sometime a bunch of what I played in Roon syncs last played data back to iTunes (via method mentioned in last message), sometimes info from only one of 20-30 tracks makes it back to iTunes. It’s so inconsistent that I figure I’ll wait to better understand how Roon deals with these things with iTunes before taking much time articulating further.

Very much looking forward to a bit of help here.

does Roon just not push anything back to the iTunes Library XML file?

Correct, we do not push data back to iTunes. It is possible to use LastFM with Roon though!

So, if managing my music - which relies on last played and play counts - is essential, I’m out of luck being able to play music in Roon, while managing smart playlists from iTunes?

I’d take comfort if Roon has any ability to consider Playlists as a filter in its Focus feature. But that doesn’t appear possible either.

Is there any way you know of to get the scrobbling info Roon provides LastFM back into iTunes?

Is Roon working to improve Focus and Playlist creation to be more on par with iTunes? I’d love to make the move from iTunes to Roon. But I’ve come to rely heavily on iTunes’ flexibility in data filtering for playlists.

The focus, tagging, and filtering features in Roon are powerful tools that I think should be able to help here — Can you provide some examples of something you’re looking to achieve and I can suggest how to do that in Roon? Thanks!

Thanks for the reply, @dylan. I would have replied sooner, but for the life of me it doesn’t seem like Roon is sending emails when you reply, despite my settings saying it should (totally different topic!).

I’m very interested in the power of focus, tagging, and filtering features in Roon. I can sense that Roon has powerful tools, and could potentially do what I want. One thing that stands out is if I had the ability to use the Focus features based upon existing playlists, it’d be a huge step toward what I want to do.

As preface, I have an iTunes library of roughly 30,000 songs. Virtually all collected as complete albums (around 2600). I generally build smart playlists so they render focused portions from larger playlists with hundreds and thousands of tracks:

If this could be done “by playlist” it would be great. And, of course, these playlists would auto update songs in and out based upon these filters.

Looking forward to your thoughts.

Here’s how I think we could accomplish this:

You can create Tags for your playlists. You can open a playlist, press Command + A to select all tracks, and then choose Add To Tag. You can then use this tag with other criteria.

For example, in the screenshot below I have selected the “My Tag” Tag, and I have used Focus to choose tracks not played in the last 6 months: 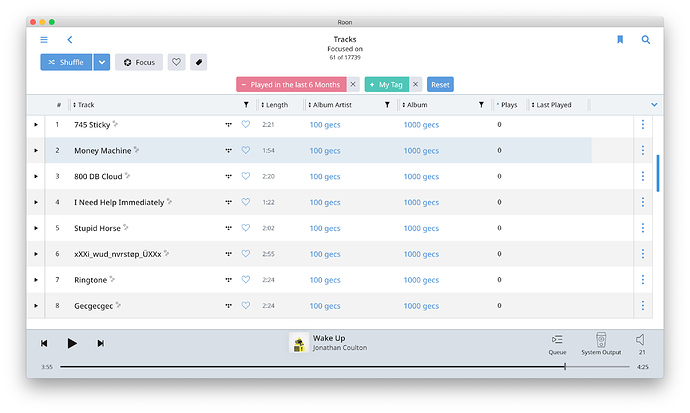 You can also sort by the number of plays.

You can also use Focus with Tags to choose tracks that have never been played: 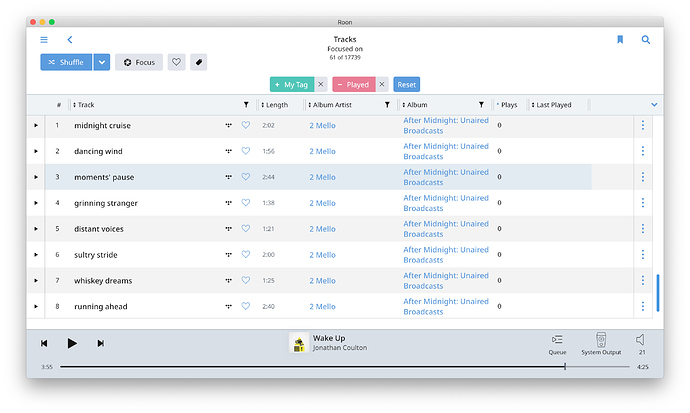 If you want to save a Focus you can then Bookmark it to quickly return to this selection.

I had the thought about using tags to denote playlists a while ago. But I didn’t figure out on my own how to apply them to the Focus feature. Thanks for that tip. I’m going to play around with this to see how it goes.

One quick question: It seems that Focus has the most robust configuration in the Albums view. If I use a tag that was applied to a list of playlist tracks and then use it in Focus under albums, will it only play those tagged tracks contained in whatever albums appear in results? Does that question make sense? It reads terribly.