Supporting plugins would be really nice, but I’m hoping that Roon will also add built-in EQ and room correction. I believe they were listed on an early list of planned future enhancements.

I’ve fallen in love with Dirac Live - pretty much love at first sight in fact - after a couple of years struggling to get a decent sound out of my lounge, and probably pointlessly swapping kit.

But I also want to be able to use RoonSpeakers / RoonReady devices when available, so the only way to realistically do it is to use a plugin (which Dirac have in beta).

Thank you @andybob, I had seen that, but its not an ideal solution for me for a few reasons.

If I’ve understood correctly from what I’ve read:
-You can’t run Dirac through HQ player as its proprietary, so can only be run through (a currently in beta) AU/VST plugin, or as a virtual sound card (which is what Im doing now despite it not remembering the output device on OSX).
-HQ player also means another license, and an extra setup layer that I’m not looking for right now.
-HQ player means moving to NAA rather than using the excitedly anticipated RoonSpeakers.

Since I’m very new to Room Correction, and lazy, I’ve tested Dirac and really like what it does, so would love to be able to carry on using it and within Roon. There aren’t many other options for a Mac.

Not everyone wants HQ player

Admittedly my test of HQ player was very short, as the interface put me off along with the fact that ALAC wasn’t supported and that’s what my whole library’s in. But from the few test tracks into the Devialet I couldn’t honestly gauge much of an improvement. I will definitely revisit when its running through Roon though, maybe with the interface out of the way, I’ll have a better idea of what it can do on a longer test.

Meanwhile, please, please for those of us who didn’t take up loads of resources moaning about HQ player not being supported, let us have a little plugin love…. I’m sure the groundwork has been laid with what you’ve done for HQ player….

So to make my wish come true, there can be a several routes.

Each route has its own complications but I like the last one best. That way, we keep the Roon interface clean and relieve Dirac from worrying about license issues (if you know what I mean^^).

Amen to shinyc’s list. I lust after AU/VST plug ins in Roon. One of my zones is a Meridian Prime headphone amp, coupled (obviously) to some phones- which clearly points out the shortcomings in my left ear. I do a 2db cut (think balance) to the right ear, and have to add a 1.7 db hi shelf to the left to get them in ‘sync’ (I prefer Fab Filter for the job). Sure, the audio chain is compromised, but any damage is far less than my ‘untreated’ ear! So, I’m voting strongly for plug ins…
Minus that, I’m searching for a standalone AU/VST host with little success. I used Pure Music in their ‘streamthrough’ mode, but it only works if the final delivery to the Prime is 44.1, regardless of source. Changing PM’s settings to anything other than 44.1 produces clock errors, with all the resultant crackles and pops. JBridgeM is in beta at best, but that didn’t work for me. HQPlayer became more grief than it’s worth. Apple’s AU Lab didn’t cut it.
Once again, if anyone knows of a standalone, I’d appreciate the tip.

I would love to use Dirac with Roon but only option (1) is actually under Roon’s control.

(2) is an HQPlayer feature request, and I’m pretty sure AU plugins have been ruled out by the developer.
(3) is a Dirac feature request.
(4) would be a Dirac & HQPlayer joint project.

I can imagine a couple of other workarounds:

Dirac Audio Processor able to output back to Roon via a virtual sound card ‘loopback’ type thing. I think this has been rules out.
RoonReady code added to the DiracAudioProcessor to enable endpoint control directly - but I can’t see this happening anytime soon. Plus I’m thinking about my own case where I don’t use HQPlayer.

Out of interest, have you tried the EQ in HQPlayer since you’re already using it? I wouldnt have thought you’re getting the full benefit of HQPlayer if you’re then sending it to Dirac? Have never tried either though so can’t say.

Once again, if anyone knows of a standalone, I’d appreciate the tip. 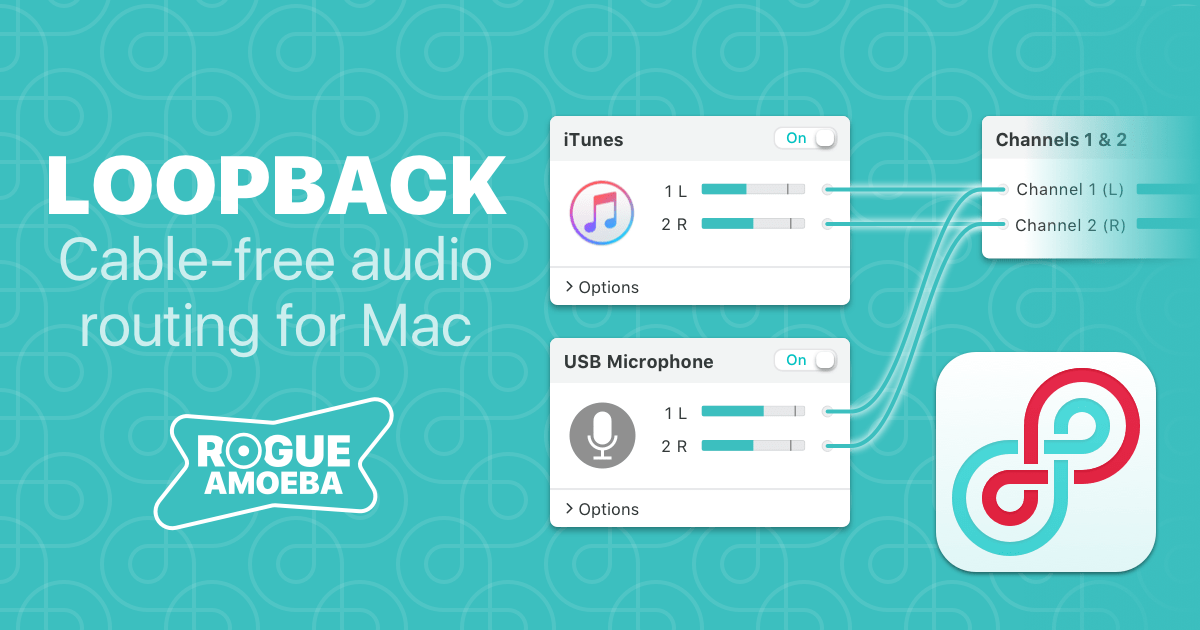 Get the power of a high-end studio mixing board, right inside your Mac!

Sorry I could not get back to you sooner.

HQPlayer thing. I use it without any filter, modulation or upsampling strategy. I did A/B with and without HQPlayer and what do you know… I get more transparency. Not by much but immediately noticeable. Our ears must be very intelligent ^^.

I think I came up with a solution. I have not implement it yet. Too busy. You guys can tackle this. I will do that in time myself. Here we go:

3. Have roon listen to the broadcast.

4. Enjoy the roon UI and Dirac and HQPlayer at the same time.

Connection between the broadcasting software and the roon through a loopback connection (in TCP/IP sense, i.e. the radio station address is the localhost). I just need to locate a broadcasting software which can do 192 kbps, which is the max resolution at the Dirac output. Rogue Amoeba Software might have all the necessary components to pull this off. I have not checked specs on the Nicecast software, though. I hope it can handle up to 192 kbps (in/out).

I hope this works. So we can forget about plugins, WDM in the meantime. Say hello to the Internet radio streaming. Ha!

I love your lateral thinking! I just tried this using Rogue Amoeba tools, and as proof-of-concept it seems to work, in a flaky way, but both Nicecast and Roon Radio have limited resolution (320kbps)

That was a super quick PoC and an ouch. I did not know roon can only do 320kbps. Back to the scratch board (running out of options thou). And a typo in my previous post. Should have been 192khz (not 192kbps). Thank you, zappyroon, for checking this out so swiftly.

Roon can do any bitrate - not restricted to 320K at all, most radio streams are about there though.

If Roon can do any bitrate, then the 320kbps limit is imposed by Nicecast. Just read that Nicecast uses Icecast engine which appears to server only up to 320kbps. Maybe there is a much better (easier) solution but for now (and for me) I will search for a streaming engine which can handle (much) higher bitrate (plus ability to take Dirac output as its input). We have no WAN bandwidth limitation for this application.

Yep, my bad. The limit was in Nicecast; sorry. Not sure what I saw in Roon that made me think it was limited. Nicecast does not allow settings above 320 kbps.

Just took another swing at this, paying a bit more attention and doing things slightly differently.

Now, it is not flaky at all, and actually plays through AIR3b as well!

Still, the final signal is “low quality” and what starts as rebook finally comes back out as 320kbps.

A small codicil: seems that for whatever reason, Dirac is not applying any filters, even though it is streaming, and the output goes into Nicecast and then back into Roon as a radio channel.

Now that Roon 216 offers enhanced DSP but without any tools for measurement (and I grant that this is not their business), it is time to revive this thread and promote support for VST/AU plug-ins and/or support for DiracLive or similar applications.

I also would opt for an AU/VST option. It’s mainly the reason I have to switch to VOX-player during my mastering sessions. This way I can add analysers and metering to check streaming services, original recordings and even radio streams. Short term LUFS for instance is something we use more than dynamic range metering and is not implemented in Roon Labs at the moment.

Support for plugins would be very helpful. Sonarworks has a GREAT plugin that can correct headphones/rooms, but their standalone program won’t work with a networked NAA. A plugin for Roon (using the Sonarworks plugin software) is the only way to get it into the signal chain.

@Brian commented on this a long time ago: the VST plugin architecture comes from the old single-box style of computing, so the plugin that has the purpose of doing audio processing also does GUI. That does not work in Roon, where audio processing is done in the Core, which often has no display and in any case nobody is looking at it. And even if Roon could do a major rearchitecture and put audio processing in the endpoint, often those don’t have UI either. The only device that has UI is the remote, and no audio passes through there.

VST would have to be rearchitected for modern distributed systems.

I still use Roon only for the interface. But I have to output to Jriver over ASIO and let Jriver finish things due to Roon’s DSP limitations which are:

I bought Roon early on because I hoped that someday a beautiful interface would mature into more sophisticated playback software. In some ways it has improved. In other ways it is still far behind other software.

Flexibility is very important because there are many 3rd party applications about which Roon should be careful to ensure compatibility. The greater the compatibility, the more potential new customers Roon will have.

There are actually ways to host VST plugins on headless systems, for example MrsWatson. IIRC, you can use MrsWatson to interrogate the available plugin parameters, including the acceptable range of values for each parameter, and set those. So, it seems entirely feasible to build generic UI in Roon for controlling plugin parameters and host those plugins on the core.