Thank you Geoff. I am looking forward to getting my issue resolved

A post was split to a new topic: Dropouts when streaming from any source

Can you provide some examples of dropouts for me? Please include the time the dropout happens and the name of the track it happens with for the next few times you experience this. I’ll then enable diagnostics and take a look at those examples.

@dylan At the present moment I am streaming a shuffle of 622 Nirvana songs from my library and every 2-3 songs it skips. I know it skipped on the second song of the playlist this morning, and others randomly afterwards. But I didn’t keep track.

This morning and prior to the shuffling of Nirvana I tried playing live radio using stations WBAB 102.3 and Wehm Manorville. WBAB stopped within 60 seconds and stopped again a minute later after hitting play again. Wehm stopped within two minutes, then I switched to the library.

@dylan any luck with the diagnostics?

2 posts were split to a new topic: Roon Dropping Endpoint

@dylan do you have any updates on the issue and the resolution? Roon is not currently useable for me and seems like others are having the same issue since the last update

@dylan Is there any update on this?

@dylan . Hey almost two days without an update … not feeling the love for a lifetime subscriber…

@dylan @support. It’s really disheartening that there is no response for days and no response to other people having similar issues. I’m a lifetime subscriber and right now I am second guessing my decision of that purchase with non- existent customer support. It’s hard for me to recommend a product anymore if the support you’ll receive after you pay for it doesn’t exist, I hope Roon is able to change my sentiment.

@dylan @support . I’ve uninstalled Roon, then reinstalled and changed out the WiFi dongle. The issues still persist… no issues with any other software that would access my network or the internet including JRiver and using JRiver to access large video files.

What are the next steps on troubleshooting from Roon’s end? I understand the holiday, but no communication for many days on this.

Thanks for the patience over the long weekend! Our team’s queue is a bit longer than typical at the moment, so it may take longer than expected for us to get back to everyone, but we’re working hard to make sure that we help everyone as soon as we can.

Looking at the diagnostics report from the time playing Nirvana tracks, I’m not seeing any particular errors on the Roon side that jump out. In most cases, it looks like playback might be stopping because of communication with the storage location, but it’s hard to say for certain that is the case with the data we have at the moment.

Can you try putting a small subset of tracks (an album or two) directly on the Core PC instead of the NAS? Do the same skips occur when playing to System Output? If so, please make a note of the time it occurs and the specific track name(s) and we’ll enable diagnostics to look at this instance as well.

@dylan Please look at my logs for today. Today it was happening randomly were it skips to the next song in my library. Wouldn’t the log only pick up the length of the song played?

Only live radio completely stops and that was happening today too, regardless of selection. You can see the issues with live radio in the logs when it stops within 15-20 minutes of being initiated or sooner. I’m also getting issues where my iPad and iPhone get disconnected from the core randomly. Like I said earlier this is a connectivity issue with the core regardless of media source.

Hence the issues, with my library, live radio and my devices to control the core. JRiver is on the same machine never disconnects and streams continuously uninterrupted for hours on end. I can also stream directly from my NAS library via my iPad, iPhone, or a/v processor without any interruption

Update: Roon completely stopped playing appetite for destruction from NWA via my library at the 1:33 second mark…it did not skip , but stopped. The time stamp is approximately 4:44 pm est

Stopped at 4:49pm eastern playing son of byford from Run DMC at the 23 second mark.

@dylan Attaching screen shots if the logs, where errors are clearly shown… 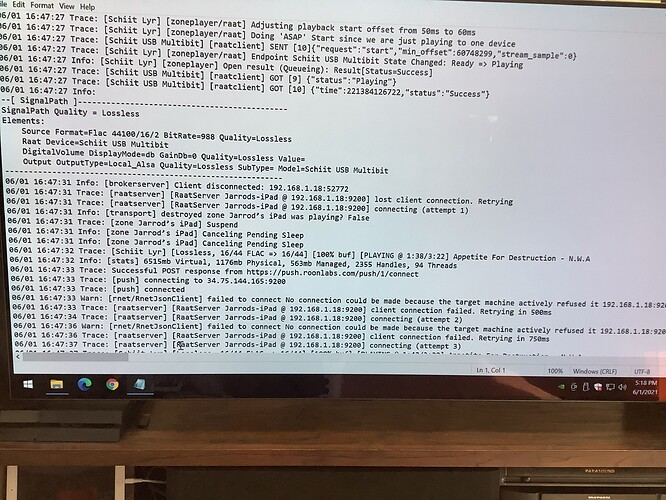 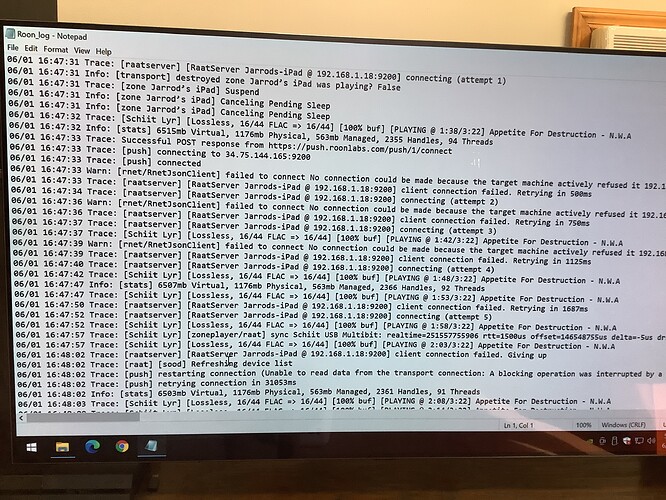 @dylan after reading the logs, the offender appears to be my iPad controller. Any suggestions? Or at least that is what I am thinking

That’s easy. Shut down the iPad app and use your computer to control Roon to see what happens.

Nope that isn’t it. Shut down all the iPads and the Roon core still skips songs. Doesn’t look like it is iPad issue. I still believe it is related to the last build. @dylan skipping using Roon core only happened at 8:19 pm eastern.

I too am getting dropouts and skipped tracks with the 795 Build. Same symptoms as OP.