DSD Is Being Converted To PCM

I’m having trouble with playing DSD files. My DAC is displaying 352 instead of DSD 64, 128, etc… which would indicate that the DSD file is being converted to PCM. The problem is not with the DAC but rather with the signal it is receiving.

My Roon endpoint streamer is a Bryston BDP Pi. The DSD playback was working correctly which might indicate that I need to adjust a setting to operate it normally again?

I checked for a DoP setting or a Native DSD setting but I’m unable to find one.

According to the manual, neither DSD nor DoP are supported:

Thank you for your purchase of a Bryston BDP-π; a state-of-the-art digital music player that can play back the vast majority of digital music file formats including today’s most popular lossless codecs including AIFF, FLAC, WAVE, APPLE LOSSLESS, and more at resolutions up to 192kHz / 24 bit PCM.

I’m not sure if this device is Roon Ready, but you could try identifying it as a HiFiBerry Digi+ since this should support DoP.

Martin, the manual you are referring to is an earlier version of the BDP Pi. The more recent version, which I own, does support DSD up to 128.

Please share screenshots of the device settings / advanced settings in Roon. Thanks.

If Roon is identifying this pi correctly then under settings:audio for that unit under device setup: advanced you should see a dsd setting.
Do you see this?
See for example…

I checked for a DoP setting or a Native DSD setting but I’m unable to find one.

In that case, check your streamer own setting page (not inside Roon).

Yes, will check the Bryston .

I disconnected Roon from the Bryston and used their own built in software Manic Moose. My DSD files played as DSD 64 playback, so there’s something between Roon and the Bryston BDP Pi that isn’t translating correctly. I’m wondering if I’d benefit from uninstalling Roon and then doing a complete reinstall of Roon?

I was unable to find this page under settings. I’m using Apple OS if that matters.

You should now see the screen @AceRimmer is mentioning.

Bryston claims that their BDP Pi is a Roon endpoint but I am unable to make adjustments regarding PCM and DSD playback. Here’s a photo of my settings page; 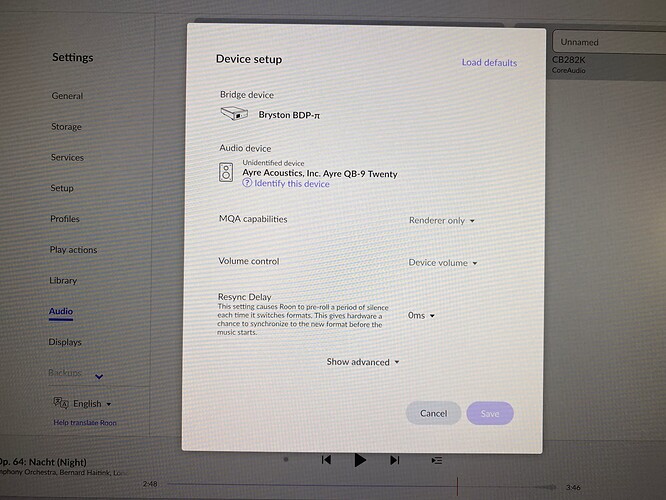 Click on Show advanced to see the settings posted by @AceRimmer.

When I click on ‘Show Advanced’, it’s blank. Nothing shows up.

Looks to me like the bryston is the Roon Bridge and the Ayre QB9 is your actual endpoint.
And that is what you are seeing properties for and what is dictating the signal path.
I don’t think a standard QB9 is dsd capable.

Edit…just saw it says qb9 twenty which was the upgrade Ayre offered which was dsd capable.
Is it truly the qb9 twenty model?

However it also says it is unidentified so Roon is not seeing it as being dsd capable even if it really is.

Unfortunately it is not a Roon tested model so I don’t think Roon will ever see it as being dsd capable as it cannot identify its properties.

Yes, it reads a DSD signal up to 256. DSD works with the Bryston software. Roon says it can send a DSD signal to the bridge/ end point and to the DAC so I don’t know why a problem exists

Unless you can access the advanced settings I don’t see how it can be set to dsd.
And that might be stemming from Roon seeing it as unidentified?
Has it always shown as this do you recall?

As a test you could try identifying it as the qx5 twenty instead which is Roon tested.
That should open up the advanced settings to be able to check to set for dsd.
This will not screw anything up.

All-right, I’ll see if that works, thanks. Do you know if the Bryston is just passing through the Roon signal to my DAC or if the Roon signal is being actually being processed by the Bryston? I realize this may be outside of Roon’s wheel house.

I think it’s just truly acting as a bridge streamer so just passing the signal through to the dac.
But m not really familiar with Bryston gear although I did have a firstgen Pi some years back,long enough to know I hated Manic Moose…lol

Is it truly the qb9 twenty model?

There is no reason to doubt that based on the screenshot.

However it also says it is unidentified so Roon is not seeing it as being dsd capable even if it really is.

I don’t think that’s the cause. Even if it does not know it can do native DSD256, DoP should still work. DoP is sent via PCM.

Not if the bridge is saying it does not accept DSD input. As for why, it’s usually a user configuration issue.

If you cannot find the necessary configuration for DSD to work, you will have to ask the streamer manufacturer.

or if the Roon signal is being actually being processed by the Bryston?

That depends on the design of the particular streamer you’re using and user configuration.

I contacted Bryston about the Pi and was told that it simply sends the Roon stream from the computer to the DAC without processing it, so the signal is coming from my M1 Mac Mini and not the Bryston.