I have a Digital transport built with Parts from Ian Canada. Recently I have been running Picoreplayer, but changed to Ropieee to be able to switch between LMS & Roon on the fly.
Previously DSD files (dsf) have been played really well on Picoreplayer, Ropieee/Roon does so as well but Ropieee/Squeezelite, most tracks are played back but with a curtain of white noise quite high. Is there any setting to tweak?

Can you switch to beta?

In the beta channel is an update available for Squeezelite.
Otherwise you need to wait for the next release (which is imminent).

Thanks for quick reply. I will change at once.

Updating now. Well the OTA update seems to have crashed. It wont reboot, now over 15mins
Do you have it as a zip file?

The update is large, so you just need to sit tight.

OK, got it up and running.

Have you tried the new DoP switch in the Squeezelite settings?

Not in this version, in the Stable release it made no difference. Im not at home until later so I cant try right now.

Exactly what Ian Canada parts are you using. I had no success with his boards for DSD and I2S sadly. 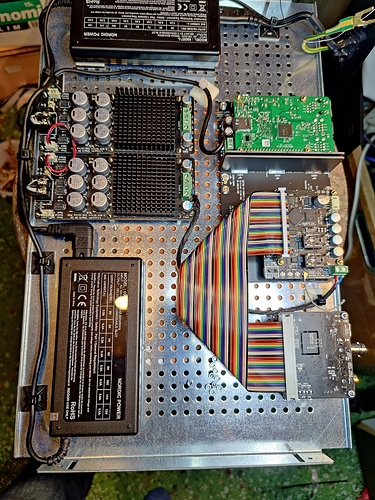 Not familiar with any of that lot

Tried the new release 20210131, upgraded it to XL (beta) and it works fine w DSF files in both Roon & LMS, switching back and forth is also flawless.