With my MacMini i3 (2020 built, MacOs 10.15) I don’t manage to get the upsampling rates for DSD possible for my Teac NT 505. The highest consistent rate is limited to 128 (per Roon setting), whereas the higher rates up to 526 per NT 505 setting will only briefly show up in the signal path and then cancel away. I am wondering whether the issue is related to the OsX System or the i3 processor of my MacMini. Would I get a higher DSD upsampling rate with a Mac i7 processor, or alternatively with a Windows/Linux system?

Mac does not play native DSD, it instead utilizes encapsulated DSD, aka DoP, which maxes out at one sampling rate lower than the native rate. So, if the device’s max native rate is DSD 256, then you can only get to DSD 128.

If you want native DSD, Windows is the first choice since it is just a matter of loading the driver. Linux might work, but, you have to research the compatibility between the hardware and the specific linux build.

Thank you for this clarification.If I was to get a Nucleus Rev A, would i be able to get native DSD 526?

Hello @Bodo_Vollhardt, based on the NT-505’s webpage, it doesn’t look like this device supports Native DSD with Linux either, so to get this functionality you’ll want to connect it to a Windows device. This Windows device doesn’t have to be your Core machine, it can be a remote or a device running RoonBridge.

If you have any other questions please let me know!

For upsampling, you can use NT-505 built-in upsampling to DSD instead of Roon upsampling. This way you don’t need to change to USB input.

If you want to use Roon upsampling to DSD512 instead of NT-505 built-in upsampling, you will have to connect the NT-505 via USB to a Windows PC, not Mac.

Very helpful, thank you Peter. As I found out, DSD upsampling doesn‘t work well. With USB, I get DSD 258 with my Mac, but with built-in upsampling @ DSD 258 the sound doesn‘t seem to be the same, and the signal path doesn‘t look right to me (no signal conversion). At any rate, I was not impressed with SQ even when using USB DSD: trebles sound harsh with a hiss -like quality and the sound as a whole sounded meager. Helpful experience, it seems I better stick to PCM. 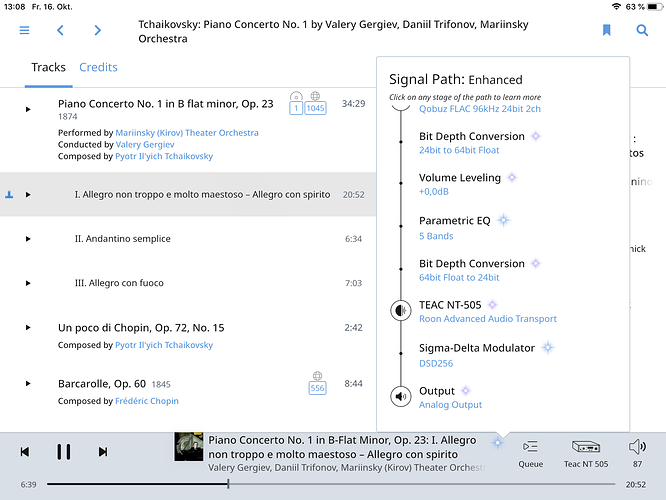 BTW, with DSD and processing the highest rate is not always the best SQ. A lot depends on your actual DAC chip. Try setting your TEAC to do 128, AND turn off all the DSP in Roon and just send the DAC straight untouched input.

If you expect no signal conversion before the signal reaches NT-505, you should disable DSP Engine in Roon, and turn off volume leveling.

If you don’t like NT-505 built-in upsampling, you can compare native PCM vs Roon upsampling to DSD128 via network, or DS256 via Mac OS USB.