DSF does not play with convolution [Fix Pending Next Build Release]

I have the same problem as @Le_Dom, dsf does not play with convolution and native DSD processing, while PCM is alright. I use a zip file with two mono wavs for convolution, made with rePhase, at 352.8 kHz, no .cfg file.
Here is a screenshot of the audio chain: where I normally have 2ch 262k taps (set by rePhase) when playing PCM I have more than two million taps with native DSD.
I have tried convolution wavs with lower sample rates (192 kHz), but the number of taps stay at about 2M. Is this expected behavior, and can I lower the number of taps by changing the sample rate? 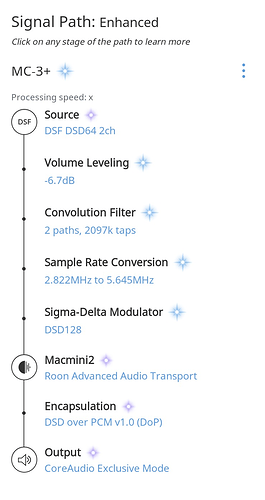 Hi @Ruud_Verrijk ----- Thank you for the feedback and my apologies for the slow response here.

Right now, if you want to use convolution on DSD content natively, you’ll need to use HQPlayer, as Brian mentioned here:

No real difference for frequency/phase response, but filtering with more precision allows the filter to have better time-domain characteristics–or rather, to express its time-domain behavior more precisely. Convolving DSD at DSD rates is the domain of HQPlayer for now. We’ll get faster, but it’s a very demanding use case, so hard to make guarantees about where that will end up. I’m 95% sure it could work without the 176.4/192 if you could make REW generate native filters at 352.8kHz/384kHz w…

does latest 259 build resolves this problem?

I suppose that the answer is no because when I try to play native DSD files I get no sound with this build.

I another hand I’ve noticed that I must select filters with resolution corresponding to the sample rate of the track I’m playing.
So I have stereo wav impulse files with sample rate from 44.1 to 384 kHz and their cfg files in a zip folder to be sure that all my audio files in any resolution will be treated by convolution.
If I only select one simple wav impulse file (e.g. 192kHz) I get no sound with other audio files with resolution other than 192kHz. Is it a normal behavior?

Hi @Le_Dom ---- Thank you for the post and chiming in to share your feedback. Both are appreciated!

Moving forward, may I very kindly ask you to please post a screenshot of your signal path leaving Roon when you getting no sound while playing native DSD files.

many thanks for paying attention of my remarks.

Here is a screenshot of my signal path when I getting no sound while playing native DSD files: 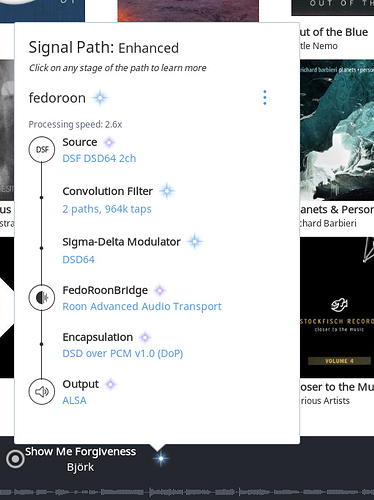 I get sound but in despite Native DSD processing is enabled:

I get this signal path: 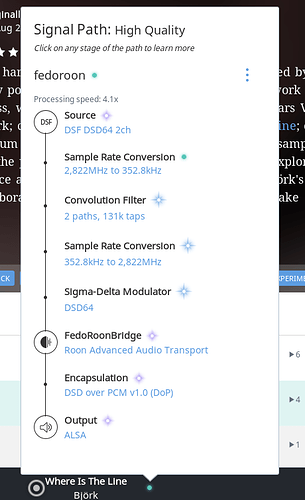 Note that RoonServer and Roonbridge are installed on two different computers (PC server and PC player).

The OS is a minimal install of Fedora 25 server 64bits.

Perhaps it’s a particular behavior of RoonServer or RoonBridge under with Linux.

I’ve noticed something else. When playing of the latest track of a queue is finished, approximately the last second of the track is often played again.

Hi @Le_Dom ---- Thank you for the follow up, and more importantly, thank you for your patience.

We would like to do some testing in house, and wanted to see if you could please provide us with a sample “wav impulse file” you are noticing this behavior with in a dropbox download link.

I’ve just tried something. In my zip package of wav impulse files I’ve removed the 384kHz wav impulse file and its corresponding cfg file. In this case native DSD files are treated by convolution engine and I get sound.

Here is the signal path in this case: 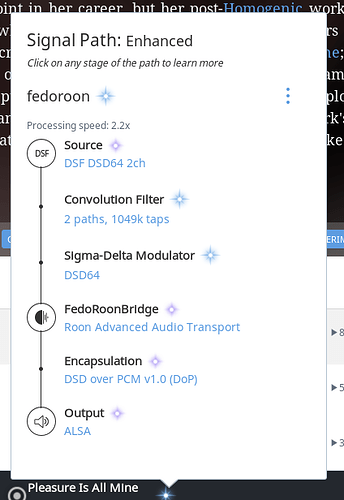 Thanks for the follow up and insight, @Le_Dom! Very appreciated!

Confirming that I have downloaded the supplied package and will be adding your latest observation to my testing notes for our tech team.

Hi @Le_Dom ---- Thank you very much for your continued feedback and more importantly, thank you for your patience!

Moving forward, our QA team are going to be sending your ticket to our developers who will be taking over this investigation. Before passing the report over, I wanted to reach out and make sure that I have all the correct information in place

Failure:
When playing back DSD content with the following filters active: “Cor1S44 - Cor1S384” (.wav and .cfg) you are unable to playback successfully, correct?

Success:
By removing “Cor1S384” .wav and .cfg) you are able to playback DSD content successfully, correct?

correct and I remind you that I’ve noticed a strange behavior that happens from time to time with convolution enabled:
When playing of the latest track of a queue is finished, approximately the last second of the track is often played again.

Thanks @Le_Dom, the verification and reminder are appreciated!

Hi @Le_Dom ---- Thank you for your patience while we have been looking into this behavior you’ve reported to us.

Moving forward, our devs have been able to replicate the issue you’ve reported, in house and are currently working on addressing the problem. When I have a better sense of when a fix will implemented, I will be sure to reach out with another update.

many thanks for this information.

Hi @Le_Dom — Letting you know that the issue has been identified and a fix is in place, pending our next build release.

Many thanks and congratulations for your job!!!
Dominique.