I have a series of folders but the files are only in one folder.

Time to update: Clearly it makes no sense for me to watch my iTunes Library AND my Music Library as they are both on the same Pegasus 12TB R6 Raid 5 Thunderbolt drive. I disabled the iTunes Library folder in favor of the main folder where all my albums reside. Clicked on Force Rescan. roon accomplished everything with alacrity. Cleaned up my roon display nicely.

No reason to create my own duplicates. Thank you again Mike. All’s well that ends well. N’est-ce pas?

Just re sorted my folders all to one folder ‘Roon Music’. It’s re scanning now so time will tell.

Ok @fritzg – just sent you some info about submitting logs so we can look into this.

Everyone else, appreciate the feedback – let me know if any more issues surface. Thanks all!

Thanks. Logs sent. Inexplicably all the dupes are gone. Very odd.

This problem is back again.

Suggest send the logs again. Something odd must be going on to cause an intermittent issue like this.

Roon just is not working right. It keeps changing my data. CD singles are after I corrected all metadata, every time wrong again, it can’t deal with a folder of Billboard hits. It keeps returning as 100 different albums…grrrrr Going back to Sooloos as soon as I can!!

They’ve got two sets of logs. I’m considering an uninstall and fresh start. Any suggestions on best way to do that?

@fritzg – just responded to your PM. As I mentioned, you can do a fresh install by deleting (or renaming) your entire Roon database folder. Everyone should note that this will erase all your edits, play counts, Roon playlists, favorites, etc.

@Wim04 – sorry to hear you’re having trouble! Can you create a new thread with some of the information mentioned here and we’ll figure it out? Thanks!

Thanks. This scorched earth method is not ideal, but it has solved the duplicates issue as well as the issue of not all tracks in an album showing up.

All 13 versions of Track #10 point to the same file. No overlap in my watched folders. Forced rescan didn’t make a difference.

I just found another album where Track #9 is shown ~100 times (also the final track on the album). 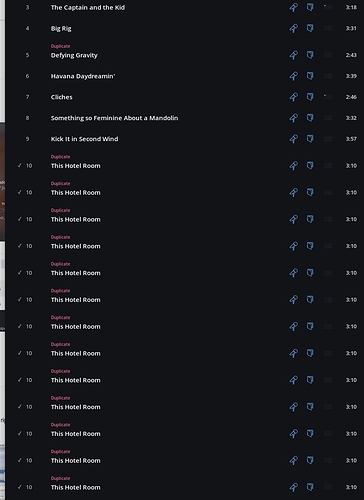 Thanks mrvco,
That looks … wrong. I’ll flag this thread for @vova to check it out.
Are you running Build 65 which was just released ? You can see the Build No. in Settings/About.
It will assist if you can provide the information set out in this thread

I am having the same problem. I have Roon on the MacMini and on my iPad. I keep getting duplicates and some time more of the same album. I have checked my files and there is only one file of any of these particular albums. It does not happen on all but about 30-40% of everything I have ripped shows up in the Roon interface with duplicate covers. Not exactly sure what to do about it. Alot of the time when Im playing a particular album or track, “Other” will appear under the description in the meta data. When I click on that it offers the option of deleting one of the duplicates which I have done about 30-40 times. Unfortunately, it does not remove the duplicate cover. Very frustrating…any suggestions.