Duplicate albums not merging as expected

image2831×1354 720 KB
Some of my albums appear twice. I know that Roon is supposed to automatically merge these into a single album, but it doesn’t look like it’s happening properly. Within one of the albums (my local one) it shows the other Qobuz album, but I can’t add it or make it primary etc. There is no Versions tab in the Qobuz version. 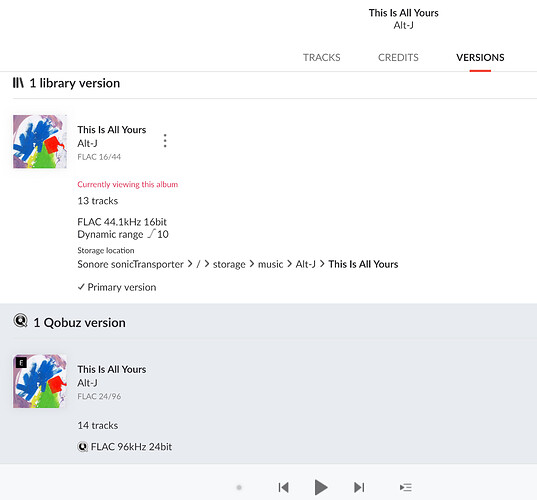 image2011×1870 207 KB
I know I can hide one of the albums but I don’t think that’s how it’s supposed to work, so wondering if there’s anything I can do to fix it so the albums are correctly identified as duplicates (and the different versions visible as expected) or if it’s a bug that needs fixing.
Thanks!
Rich
Nepherte (Bart Verhoeven) May 7, 2021, 2:56pm #2

The reason it doesn’t merge them together automatically is because they have a different number of tracks, leading Roon to believe they are not exactly the same (which they aren’t). You could still select both albums, then edit, and finally group them together as alternate versions.

That is exactly the answer I needed. Thanks very much!