Duplicate Artist - How to resolve?

I seem to have a number of artist that in some cases share the same name but I have no music by them, or the artist seems duplicated.

Am I able to resolve this to remove them?

You can merge them easily

But the “Air” and “Black” are two different artist so can’t be merged.

If you are quite sure that two different artists are in fact the same, then the Roon KB has a section on merging artists.

If you get it wrong, you can un-merge via settings > library > un-merge artists.

Note, such artists do need to be in your library. I’ve mentioned that here

How do you merge artists? Roon Software

You should be able to merge artists in your library from the general search screen whether or not they occur in artist view. Here I discover that I have 2 Vernel Fourniers, one misspelled. As a jazz drummer he does not appear as a primary artist and does not appear in my artist browser. Nevertheless I am able to merge. [Screenshot_20200323-174710] On your screenshot, you have not toggled the Only show my library switch. If you do that, which artists are left? (The above, which I think is…

Thanks, I’ve merged the duplicate artist.
With “Air” I managed to prove Qobuz are pulling in two artist of the same name but from different countries even though I only added the “Air” I wanted to follow.

I have merged some artists by selecting them and clicking “Merge Artists” in the top right as described in the KB. However, this does now always work as there is no such button, see this screenshot:

I have tried to add an album of each to the library, but this did not help. Why is that and what do I need to do?

Finally, how to generally best handle artists who appear on the album with a nick name? I.e. I ripped an album where this same guy appears as Luca “'O Zulù” Persico. Other musicians also appear as First “Nick” Last, and these guys do not exist as artists in the Roon database at all. Should I create them as First “Nick” Last, or as two artists, one with First Last and one with Nick and then merge them?

Any and all help appreciated!

Here’s a kludge. In the Artist view you can select one of the artist’s listings, then edit the artist name using a code like MergeArtist. Do the same for all you want to merge. Then you can filter for MergeArtist, select them all and merge. Then go back and either use the name suggested by Roon or add your own edit name. Also you can add “aka” in the edited name, but I’ve not found a way to add an “official” aka.

Thanks very much. So there are areas in Roon that are not perfect

(I am new, have used it for 4 days and am thoroughly loving it)

I just learned that if you enter “Firstname Lastname aka Nick” in the Artist edit field, it displays the aka in a new line and smaller font, e.g.: 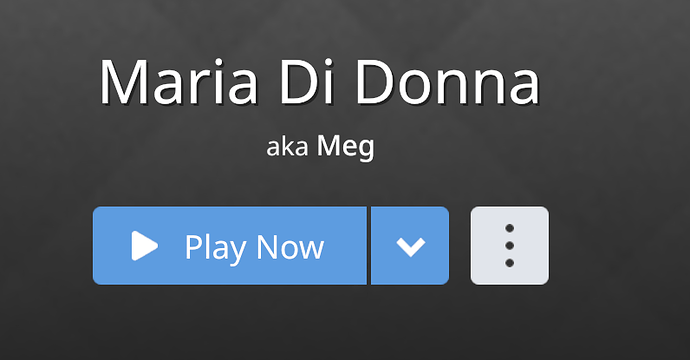 and then it autolinks this artist to tracks/albums where they appear under the Nick. Amazing. Roon is so smart!

I am not complaining, it is truly amazing software, so much so that I am surprised to find a cranny where it is not perfect.

Doesn’t work for me. Can you post a screenshot showing where you made the edit?

No, you are right, I don’t know what I did

I created other artists with aka names and they do not not show up like this. The Maria Di Donna aka Meg does, though. Maybe I merged them, and looking again I think it seems I somehow messed something up

Excuse me while I am gone to fix this

Edit: I think I see. I deleted all these ripped and edited albums again. Now I see that the pre-existing Meg is already labeled “aka Maria Di Donna” (in the small font). Searching for the aka name then brings up the “other side”, i.e. Maria Di Donna “aka Meg” (in small font). I guess that this is independent of my edits and pre-existed in the database. If so, it is a bit inconsistent as e.g. John Lennon has aka names, too, and if you search for them the results differ for each.

Oh well, live and learn, good that this happens now, while trying things before I rip all of my 1000 CDs …

Yeah, one of the problems for Roon is artists with aka’s. You wind up getting duplicate listings. For example Roon has Wally de Backer and Gotye. It’s the same guy. Bebo Best is also Bebo Balban. Lots of examples. Roon’s metadata supplier sometimes gets it right and sometimes not. Kind of a crapshoot.

There are endless complications in metadata. I just found out that Animal Collective renamed their 2003 album, Here Comes the Indian, to Ark, for political reasons. Who would have thought of a need for aka album names. I am happy that Roon understands that works have original release dates and version release dates, and that you usually want to sort by the original date, this is already miles better than what I had before, i.e. Tidal and others sorting 60ies albums into the 2000s