Could it be that a duplicated server duplicates the files in an organised folder ?

All files in the organised folder are physically duplicated now (see screenshot). 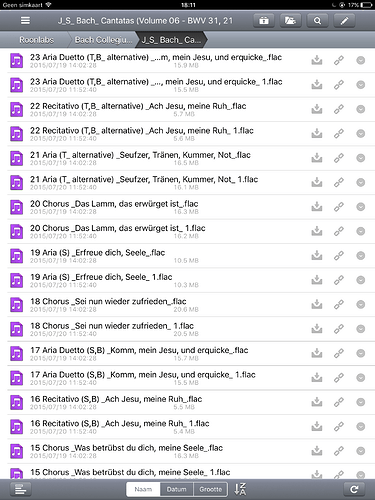 Hi @Georgethesixth – organized folders shouldn’t be creating duplicate files, but there are some known issues when you have multiple copies of the same album. We’re looking into these issues, but I should mention that we generally recommend against using organized folders for your entire library.

Organized folders work well if you have multiple remotes around the house and want to do occasional drag-and-drop imports directly to your main server – the organized folder ensures your imported files end up somewhere predictable.

However, because organized folders immediately re-ogranize your files based on the metadata retrieved in Roon, we have seen people get unexpected results when adding their libraries directly, despite the warnings we display during the initial setup. Because of the potential for confusion and errors here, we are considering removing the feature in the future.

For now, I would strongly encourage you to stick to watched folders, as they’re going to be a much safer and predictable way to store your files. Let me know if any of that is unclear @Georgethesixth!

Thanks for the feedback. I have a backup so no harm done. You might look into it though : I see no other reason while the whole library suddenly has duplicated items. We’re talking about 30.000 files that suddenly multiplied to 60.000 files.