Dynamic Range of song (in display)

If a song has limited peaks and valleys, is that probably a problem with the ripping? (the song is not inherently constant).

I have some old ripped MP3 with a high bitrate (Variable Bit Rate 320). Not how I would do them today, but not necessarily going to re-rip.

Here’s a sample, although some are even more to the top and bottom. Does anyone use this for anything or its mostly for looks?

Have you looked at the Dynamic range numbers? I expect they are low.

I’m away from my Core at the moment, but I was wondering if that is more reflective of the song content itself or the ripping. Since it happens across a lot of songs (have not looked methodically yet), my theory was the ripping?

Where are the Dynamic Range numbers for a song?

If a song has limited peaks and valleys, is that probably a problem with the ripping?

The loudness war (or loudness race) refers to the trend of increasing audio levels in recorded music which many critics believe reduces sound quality and listener enjoyment. Increasing loudness was first reported as early as the 1940s, with respect to mastering practices for 7" singles. The maximum peak level of analog recordings such as these is limited by varying specifications of electronic equipment along the chain from source to listener, including vinyl and Compact Cassette players. The Wi...

Here is the LU 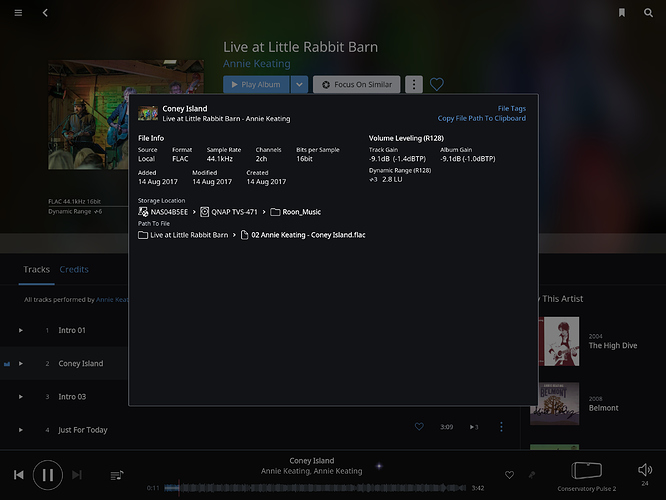 Pressing the three vertical dots next to a track reveals all

This example is not a ‘Hot’ recording but it is uniform and has a low dynamic range.
Something we recorded ourselves.
I have examples of very large dynamic range also

Here we have an example of a much louder track but with a High Dynamic Range. 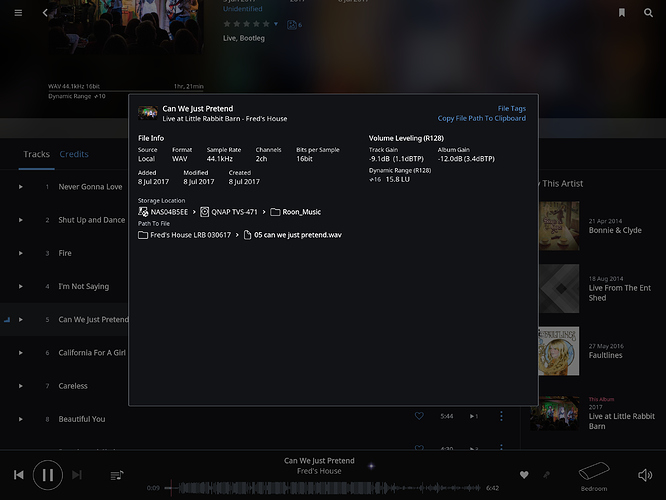 Never say never. Copy protection or excessive errors could affect the dynamic range of a CD rip. But RobOK’s concerns here likely are misplaced. And because this is an MP3 file, he cannot check the integrity of the rip against the original CD.