The purpose of this post is to interchange ideas about the different ways large classical collections can be treated. There is no right or wrong way but one which suits an individual. Below is a description of how the editing has evolved in this collection of over 16,000 albums. The editing work in my collection started in the days of Meridian Sooloos many years ago but is ongoing.

Editing is a “hobby” in itself and can be never ending. And the problems arising are not the fault of ROON but of the inconsistency with how labels decide to list albums and the associated different data bases which do not necessarily treat albums the same way.

The situation of re-releases is worse with classical than with other genre because often an album is re-issued in combination with different works and could be from a different label than the original. This can make identification of albums in sets a nightmare. I have gone though correcting identification using the up and down arrows but it is a very tedious task and is often not worth the effort for large sets, particularly Baroque and Early ones where albums can have 30 or more tracks.

To further complicate the situation there is no consistency with artist labeling. Some albums have a solo or other artist with first prominence followed by the orchestra and the conductor. But the relative order changes from album to album. So in ROON, not all albums of artist “A” are necessarily collected together under “Sorted by Artist” unless one goes through the collection and gives “A” first prominence in artist listing. That is one editing task.

Another is the actual album name. A Berlioz work might have it listed in French but it is equally likely to be in English. And data bases usually list such an album at the work of Hector Berlioz, something I edit out so all Berlioz works appear together under “B” when sorting by Album Title. But that does not solve the situation where Berlioz works are with those of other composers in an album. Here the search engine must be used to find such items and, as others have commented, this is currently less than perfect in ROON. BTW I use the header “Various:” for the composer listing for these albums and similarly use “A – Various” as Artist listing if there is a heap of Artists involved with no particularly noteworthy one.

Identifying an album from its cover graphic is easy if you are familiar with a favourite but can be frustrating, particularly in sets where they all have the same cover. I usually break sets up and change the cover graphics, using MS Publisher, to add large identifying labels. Another approach is to alter the album title so it is easily read. e.g. A listing “Beethoven: Symphony No 6” loses important identification on the display unless it is edited to read “Beethoven: 6th Symphony…” or “Beethoven: Sym No.6, …”

I do not like the ROON tags so have concocted a list of my own with appropriate tags attached to each album. E.g. with Vivaldi’s “The Seasons”, each has Orchestral, Concerto, Baroque and Early, Classical tags attached. With Beethoven’s Moonlight Sonata are the tags Chamber, Piano, Classical. Note I do add the Classical tag as there are Pop, Jazz and other genre in this collection.

Editing can go deeper by changing track listing, improving cover graphics with better examples on the net or scanned in, ……. One must be careful to not get too paranoid about all this as the whole point is supposed to be enjoyment of the music. But it is important to edit your collection so you can find that music easily.

I have gone though correcting identification using the up and down arrows but it is a very tedious task and is often not worth the effort for large sets,

This is always something of a nightmare for me. I have pretty much exclusively classical music in my collection and I choose to separate works that appear on one disk and index them by album title in Roon. For example, if a disk contains Beethoven’s 1st and 2nd symphonies I’ll split the works into Beethoven: Symphony no. 1 and Beethoven: Symphony no. 2. However, I then have to identify the works in Roon and I find for that you need to be quite precise about entering the correct full album title. Then, of course, you have to faff around locating the invidiual tracks…one at a time! It’s not so bad with the works I’ve used as an example but it’s not exactly fun when you some of the disks you have mentioned.

It would be such an improvement if we could select (click then shift click) a batch of tracks and move them all at once.

Have you considered using the composition screen to accomplish much the same result? Roon’s basic assumption is that album’s are kept together. If you break them up then you will get into a lot of difficulties as you describe and a lot of manual editing.

It is not a panacea as roon will not always identify compositions without alot of manual intervention and the composition screen strikes me as a half finnished good idea with lots of functional gaps that never got prioritised. The advantage of keeping the albums together though is that alot of roon functionality depends on that.

Have you considered using the composition screen to accomplish much the same result?

Many thanks for the suggestion. I came to Roon with my albums divided in the manner which I’d mentioned so I’m afraid I’ve simply stuck to that with new downloads going forward. I appreciate what you say but I’ve got so used now to having everything separate that I think I’d find it hard to change from that—even though it’s not the way in which Roon likes to work.

If you keep your albums together and focus instead on identifying the compositions within them then you can get a window on your library like this. So for example, roon tells me I have 26 versions of the Mozart Piano Concerto No. 21 and that Qobuz has 309 and Tidal 364. I can scroll through them if I want but when you are dealing with several hundred streaming versions like this, legacy “listing” approaches don’t really work so the trick is to use the “funnel” in the top right to narrow down your discovery. 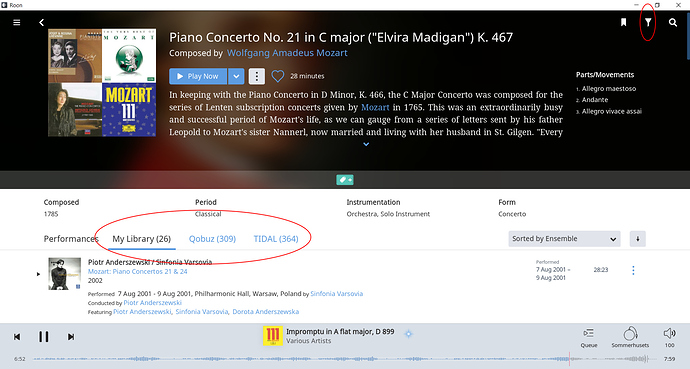 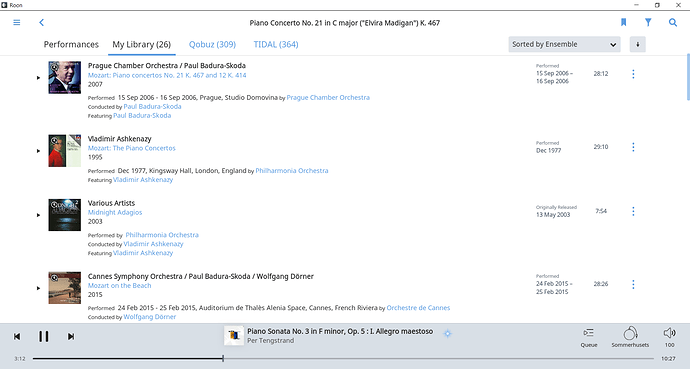 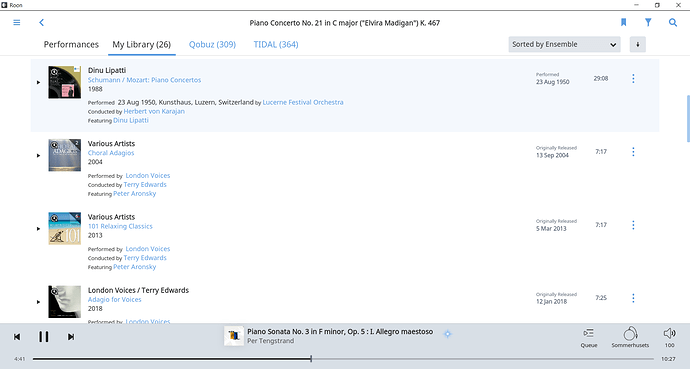 This is a roon way of doing what you want without breaking up your albums but in a way that also integrates the universe of streaming suppliers. I think it is a shame that many coming to roon from legacy players who are natural candidates for this functionality may be unaware of it. The end result I am afraid is that roon’s perception is that there is little demand for this “composition” view and it has seen no significant updates or fixes of its logic and presentation flaws in several years.

It’s worth taking a closer look as I suspect if you are breaking up your albums you are missing more than you are gaining but depending on your circumstances it may be swings and roundabouts. Sometimes you get lucky with the roon composition identification process but in general you will still have to be prepared to manually edit, much as you are doing now, to use roon in this way.

FCC I went to the effort of externally tagging Composition in my legacy system, it was a labour of love to put it mildly

I reiterate leave albums as they are , if you split them you make Roon’s job of IDing them impossible along with IDing compositions

The Composition view can help a lot , you just have to let it be to be able to relax into using it

My 2 p …no offense meant

I’m most grateful to both of you for your thoughts. It’s certainly true that I came to Roon with baggage and preconceptions which probably don’t help me get the most out of it. That said, I have a fairly small collection of only 307 “works” (few of which have more than one version) and I don’t use Qobuz or Tidal—so I’m probably not representative of the majority of people here.

I have very few works which I’ve not managed to “identify” in Roon terms and don’t tend to acquire new downloads that often. That means I need to balance the advantage of re-unititng works into albums against the significant amount of work that will probably involve. I’m still pondering…but your posts are helpful in that context.

Yep, learning how to exploit the composition view and then sometimes the filter can be very useful.

The Composition view can help a lot , you just have to let it be to be able to relax into using it

The trouble I have with the composition view is that it doesn’t discriminate between a composition and a part of a composition. So if I go to the composition “Così Fan Tutte” there are 548 possibilities under the Qobuz tab, the vast majority of which are single tracks or excerpts - ie the Overture or an aria - rather than the complete work. Any ideas on how to avoid the dross and just get the full composition?

I did says helps not Totally Solves