I would like to facilitate better Focus results among the Period and Form tags linked to Classical compositions. Can these be edited from MP3Tag or other like software, or must work within ROON?

To my knowledge this is not possible with an external tag editor. There have been similar posts for years. I thought there were feature requests but I couldn’t find them. Maybe someone else knows where they are?

Thanks Tony. I will take this as resolved unless someone has a different experience.

I think I have the same problem. The composition view shows “form”. When I list Composer=Beethoven, the form for many is blank and some Beethoven tracks do not seem to be there at all. What I was hoping to do was list all the symphonies by Beethoven that I have in my Library. I don’t see where I can edit ‘form’. I also don’t see how I could do this, modify form, with my tagging tool, MediaCenter 26. I was not sure form was an id3 tag so I went looking. Id3.org does not seem to be around anymore.

In Roon it is usual: go to the object you want to edit, in this case the composition, click on the 3-dots menu and choose Edit.... 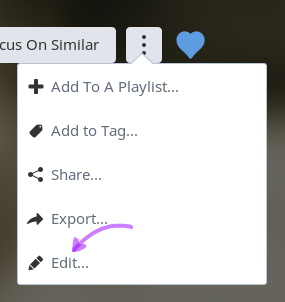 As of now, there is no way to import compositions from files.

As always, correcting/improving metadata at the source would be a much more future-proof solution. But I honestly don’t know if this is doable for compositions at all.

I suspect the answer to the OP is a resounding NO

I think so. It [form] appears not to be an id3 tag, thus no standard. What I don’t understand is how Roon figures out form. Some symphonies it has correct, other not.

This is really getting to be a problem for me. I have now twice bought the same thing twice on line because when I do a search in Roon the item does not show up. I know Roon must have other priorities but this is really irritating. The this being not to be able to edit/change elements like form that Uses in all of its different layouts, filtering, searching, and bookmarks.

Why do you repeatedly write that it can’t be edited? Have you tried it?

go to the object you want to edit, in this case the composition, click on the 3-dots menu and choose Edit... .

Neither one of us is being clear. First, it would have been helpful to me if you had a series of shots getting to the one you are referring to. There are cases where this would not work. Below is an example. It shows the screen you have been suggesting. The problem is, the way I read it, it would apply to all tracks in the set. This is a multi-disk set which may be an extreme example, but some classical albums have a combination of types as in this example which has both symphonies and an overture. I do see how to do this from a per track view once having selected the album. 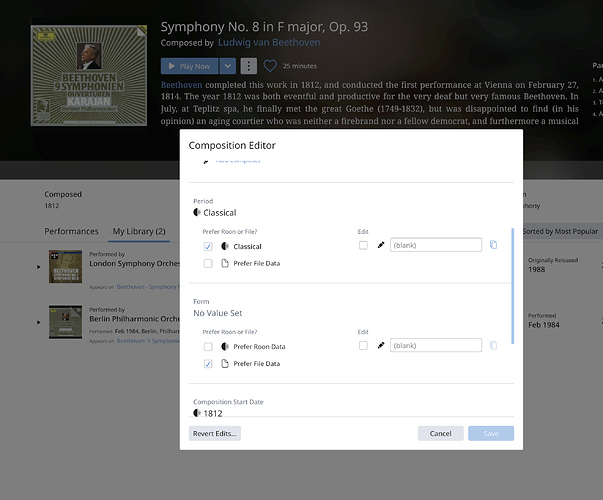 Update: Unless you have a classical sampler of some sorts that contains the Overture of said composition as a take-out (missing the other parts) which, when properly recognized by Roon, might become its own composition and can now be found and edited in the compositions browser.

I am pretty sure, I misunderstand what Roon means by composition. It is different than what I think a composition is elsewhere. That may be at the hear of my issue. When I look at a single album, in the composition view, I see several for an 'album '. I see this makes good sense to me. What I would like is to be able to directly edit each of the elements of an album in the composition view to modify form and a couple other attributes, but I know I can not do that.

I have a strong suspicion that you are correct that the object/data model in Roon simply does not allow for multiple ‘forms’ to exist on an album.

When I look at a single album, in the composition view, I see several for an 'album '.

Sorry, but I don’t get what you’re talking about. There is no album view in the compositions browser. Only compositions and if you choose one, there are performances.

I have a strong suspicion that you are correct that the object/data model in Roon simply does not allow for multiple ‘forms’ to exist on an album.

You will be able to do this internally in roon. If your album has a (very common) mix of Symphonies and Concertos for example, you can apply a different “form” for each of these multi-part compositions on the album.

But you can only do this from the Composition view. That view has no way to filter on album so if I understand you correctly, especially with a box set it would certainly be very awkward to work your way through all the composition edits you might want to make on an album by album basis. I too would like to be able to do that.

Unfortunately there are other issues with the composition view going back years. I and several others had assumed that the initial composition view release would see functional upgrades in the intervening years but despite several feature requests there have been no further enhancements. I assume because it is little used and there is little demand. Shame.