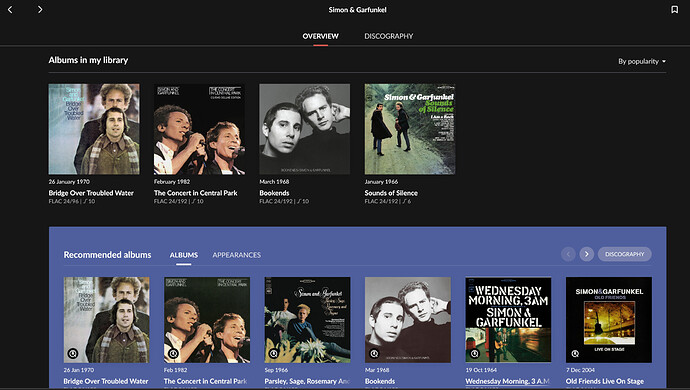 Thanks for taking that into consideration.
Best regards

To those two types of redundancies, I would add a third one, the choices made by the Roon radio. If I understand it’s functionality correctly, it either chooses from all albums in one’s library (local AND streaming) OR it picks titles from the local library ONLY (done by ticking a playlist option).

The problem occurs when the default option is enabled (local + streaming): if one owns a local version of a certain material (song, composition…), the radio will nonetheless play the streaming version, not the local version.

To those who possess local collections, that is problematic for several reasons. (For example, one may want to rediscover its own music, or tag it, or add it to playlists while listening…)

So I believe that what people with local albums would certainly appreciate is a Radio that first scans for certain titles locally and, IF NOT available, plays the streaming versions instead (not the other way around).

One of the GREAT strengths of Roon is its ability to merge local and streaming materials. But it seems to me that its superb features (dicographie, recommanded, Radio…) aren’t complete unless one can choose to prioritize its own local music collection.

So, let’s sum up. I see, for now, three types of redundancies (or local/streaming merging inconsistencies) :

Thanks again for reading!