I was listening to a DSD 128 download of Mussorgsky: pictures at an Exhibition using Roon played through my Lumin D2. A couple of the tracks would not play properly with lots of static background, pops, buzzes and finally just stopping. This occurred in the same place every time. I recopied the file and had same issue. I played the track through the Lumin app with no issues.

In Roon, I had “Enable Native DSD processing” enabled. When I disable this setting, the problem tracks play fine. What am I giving up by having the DSD source material now converted to PCM ? Am I loosing the advantage of having DSD sources ?
Thanks !

Just to follow up. I have played dozens of DSD 128 using Roon -> Lumin D2 with Native DSD enabled. So far its just a couple of tracks on this album that won’t play. They do play on the Lumin app, so I assume this is a Roon problem.
My setup is Roon core on a MacPro 2013 --hardware described in screen shot.
Music library is on a SSD attached to MacPro. MacPro is ethernet hardwired. Lumin D2 is ethernet hardwired. Signal path in screenshot.

I have experimented with all DSD associated DSP settings (Delta sigma on/off, etc) and no changes other than disabling native DSD will allow these tracks to play. 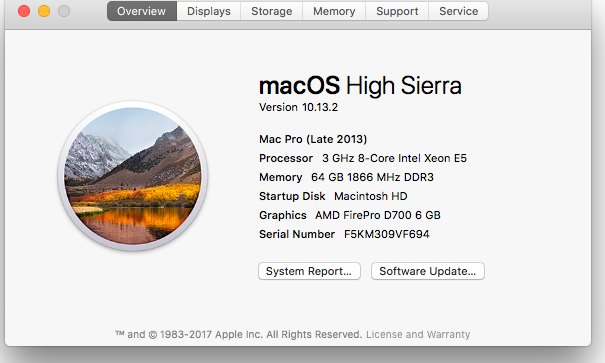 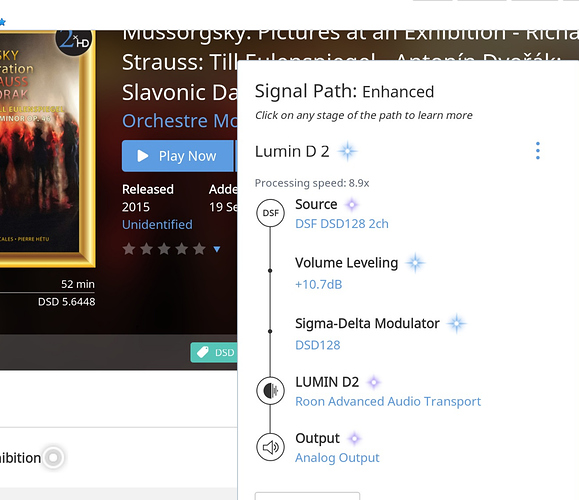 Thanks for the report. I’m going to attempt to reproduce this issue with our gear we have in-house. Can you report if you are seeing this issue when using Roon’s DSP Engine DSD Sample Rate Conversion to DSD 128? Or if it only occurs when playing back .DSF DSD files?

The problem almost certainly is +10.7 dB volume leveling. That could be overloading the modulator.

Hi-- Yes, it only occurs on a couple of DSD 128 tracks on one album, I have not noticed any issues with dozens of other DSD 128 files. Would it help to send you one of the files ? I’m not sure if you saw my last post, but when I turned off volume leveling, the issue went away.

Thanks Andrew. So, in general do people leave volume leveling off ? I had it set on track when the problem occurred.

So what is it about this file that is causing the issue with volume leveling ?

Turn the clipping indicator on and see what that is doing when problem occurs.

Thanks, I’ll have a look

What am I giving up by having the DSD source material now converted to PCM ? Am I loosing the advantage of having DSD sources ?

By using volume leveling, you’re already telling Roon to convert DSD to PCM. In your signal path you were doing DSD to PCM conversion (Volume Leveling), then PCM back to DSD (Sigma Delta Modulator), with double losses.

in general do people leave volume leveling off ?

Yes, leaving it off is recommended, unless you have to have that.