I’m looking for a Roon end point that would incorporate a dac & headphone amp. Needs to be wireless, sound decent & cost under $1,000. Any suggestions? Thanks.

Does it have to be a single unit and what headphones are you planning on driving?

Below $1000, you are unlikely to find a single all-in-one solution. You could go with one of the FiiO DAPs and install the Roon Remote on it, and get playback that goes through the Android mixer. In truth, for most stuff, that probably sounds just fine for most people (since they are unlike to have high-end headphones anyway).

If you want something that does Roon proper, then your cheapest solution would probably be a RPi4 with USB battery bank and USB DAC all rubberbanded together. Not exactly elegant and more transportable by portable, but it would do what you ask.

I’m looking for a single unit. It would be for my nightstand in my bedroom with limited space. My main headphone station is in the living room. It would be driving Audeze LCD-XC or AKG 712. Both low impedance & easy to drive. Thanks.

Ok, so wireless means just wireless, and not (trans)portable. In that case, an RPi4 in a case would be very tiny, and not require a big battery bank, either. Just the normal USB wall wart. And then a USB DAC can be very tiny as well (like the various DragonFlys). So not an all-in-one, but physically probably the same size.

Although the Matrix Audio Element I is right at $1000 and gives you a single ended headphone amp that is Roon Ready. It’s big brother, the Element X gets very favorable reviews and tested extremely well over at ASR, too.

Edit: Element I is 2.4GHz only, so defective-by-design as part of cost reducing it vs. the Element M. Element M is the closest step up, another $800. But it has more functionality (you can connect storage to it directly for playback via UPnP, has dual-band Wi-Fi, etc). The M is still a single-ended headphone amp (which is fine for 99% of all headphones). The flagship X gets you a balanced headphone output (among other things).

Matrix Audio Element I Might fit the bill. Would a Bluesound Node 2 work? Thanks.

Its headphone stage sucks big time not in the same league as the Matrix stuff at all.

Go for a pi and Dragonfly DAC small and sounds surprisingly good. I have a pi setup next to my bed. No use an Ifi nano instead and added a Schiit amp recently. 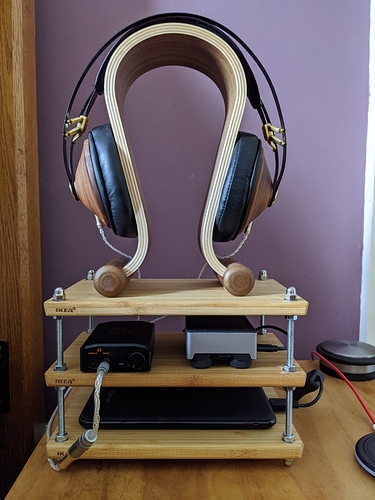 Here you go. It just works. The PecanPi by Orchard Audio.

Pecan Pi looks great. It lacks wifi, but there are solutions for that. Thanks.

I’m interested in this device. Never listened to it though…

Agreed. The Limetree Network satisfies all your requirements.

@Dick_Vliek has one maybe he can give you some input on it.

What about a Chord Mojo with Poly?

I’m using a Dragonfly Cobalt to run my Meze 99 Classics in the bedroom. Very happy with that combination. I’m using the Roon app on my iPhone as an endpoint right now. I’d happily buy a Pi or something I could dedicate to the task but I’m not willing to spend the extra money right now.

Have you considered a Chord Mojo DAC in combination with Chord’s Poly Streamer? That combo should clock in under $1k. I’ve not heard one myself but they seem to be well regarded. Darko has a review of this combo here.

I was looking forward something along these lines myself and I ended up buying the Chord Mojo / Poly combination for under £800 GBP. Absolutely delighted with it. You’ll find the videos on YouTube by John Darko (think he’s done several) really useful, especially to help understand the various options it gives you for both playing from Roon at home as well as listening on the go. Note that some of his videos were made before the latest Poly firmware update that added extra functionality.

Lots of people (myself included) use it as a source for their amp/speakers as well as for headphone listening. It even comes with a voucher code for a 2 month free trial of Roon (not that you might need it).

I knew there’s be no shortage of advice. FWIW I’d +1 the Chord Mojo, there’s a lot of “bang for your buck” there and it’s what I use for similar, I move it between the office and the bedroom. I can’t comment on the Poly, to feed the Mojo I use a Chromecast upstairs and a RPi in the office. The Poly/Mojo combination looks neat though.

I have the Element i and X, both are excellent in fact Senn 800S perform beautifully on both platforms. Over the long term a few bucks won’t matter but the quality of an excellent component will endure. Another thumbs up for Matrix. And btw, the Element i has also been tested/reviewed at ASR.

Raspberry Pi4 as a Roon bridge and usb cable into iFi’s xDSD DAC/headphone amp is a fine combination improving on the same Pi with USS to Dragonfly. I have the Pi in a case hidden away with a USB power switch in line and just xDSD on the night stand. drives over ear and IEMs well. On the journey … even an iPhone as an endpoint driving the Dragonfly or xDSD gives great results too and are very portable for travel too.