Hi, first post.
I’m using a miniPC (Trekstor W3, Atom quad core, 2GB RAM, Win 10 64 bit, 100Mbit LAN) as endpoint for a T+A DAC 8 DSD. I want to use DSD512 upsampling, but it seems, the miniPC is not up to the task (Core is ROCK on NUC7i7DNBE). I configured the MiniPC according [https://support.focusrite.com/hc/en-gb/articles/207355205-Optimising-your-PC-for-Audio-on-Windows-10]. During streaming DSD512, RAM usage on the mini is <700MB, CPU < 25%. During first tests I had occasional cracks with DSD128, frequent cracks with DSD256 (1-3 / min) and permanent cracks with DSD512 (music and cracks evenly distributed). The only significant improvement so far was the removal of the audiophool USB cable. With the T+A supplied USB connector at least DSD256 works trouble free the last 3 days.
The question is: what’s the bottleneck and can it be removed without removing the Trekstor out of the chain? If so, what are the minimal spec’s for a working solution (unfortunately Windows is alternativlos with the T+A and DSD256 and 512.)

Pretty sure that upsampling is entirely on the core machine, not endpoint. I’ve upsampled to DSD256 on an RPi endpoint without any problem.

What’s the specs of your core machine. Also, can your DAC handle DSD512?

Likely your network to endpoint is issue as 100MB LAN is not enough bandwidth to handle DSD512 effectively. All upsampling is handled on the core so that’s not the issue. Or the usb bus on the pc is not very good. You get similar issues on the raspberry pi as the bus is shared with the LAN.

Also have you set Roon to exclusive mode in the audio settings of the endpoint? This can have dramatic effect on performance if not used

100MB LAN is not enough bandwidth to handle DSD512 effectively

If I’m not wrong DSD512 requires around 50Mbps, depending on your network load (and probably on the network equipment) you should be fine with 100Mbps network.

Apologies, I see that you detailed the specs in your OP.

@CrystalGipsy has a point about the network.

Being in the business of selling data-management products, we're often asked how long it takes to transmit x-Gigabytes of data to a remote sites and other similar 'how long is a piece of string' questions. The answer can always be obtained providing...

Did you turn on the parallize sigma delta option? 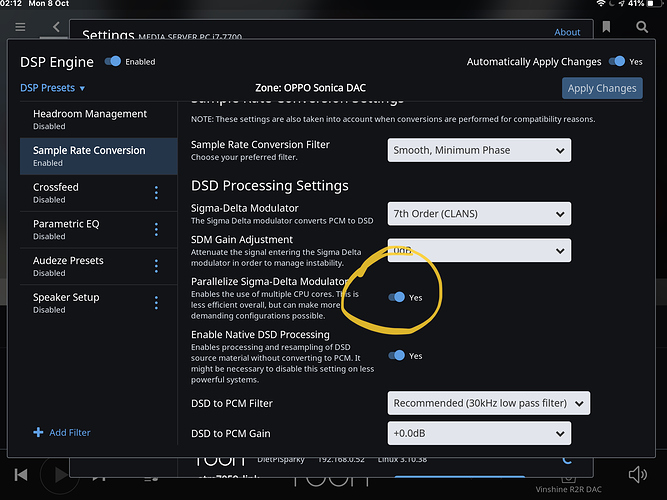 50 Mbps are roughly that, what the task manager shows in windows.

There are 2 drivers offered in the Roon setup for the T+A: the WASABI only allows DOP up toDSD128, but has the option “exclusive mode”, the ASIO driver allows native up to 512 but lacks the exclusive option. obviously i’ve choosen the ASIO driver.

Or the usb bus on the pc is not very good

That’s what i expect for the price of the minipc (was on sale at conrad, it’s a discontinued model)

Did you turn on the parallize sigma delta option?

Yes, processing speed is about 2.4 (1.4 without paralleling). The core is not the weak point. Performance of the endpoint was the same with a Macbook pro (I5, end 2011) as core.

I can push DSD512 native via a RPi3B with no issues and this is 100Mb LAN so maybe if its USB 1.1 then that could be an issue for the endpoint. I’ve used celeron based Windows PC for bridge to DSD512 too with no issues. WIFI connection will give issues at higher bitrates tho.

What Roon software are you running on the MiniPC ? If it’s full Roon, I’d suggest trying Roon Bridge for 64 bit Windows instead. Download. That should be a much better fit with the Atom CPU and 2GB RAM. Roon Bridge is an Output only, no Control functions.

You’ll have to arrange Control from another device. Either connected to the Core or a tablet etc.

What Roon software are you running on the MiniPC ? If it’s full Roon, I’d suggest trying Roon Bridge for 64 bit Windows instead.

You’ll have to arrange Control from another device. Either connected to the Core or a tablet etc

I’m running Roon Bridge on the Atom, last build. Control is on a MBP.

I wonder if configuring the Windows 10 installation on your MiniPC to run only the necessary services for Roon Bridge and your network might help. I wish I could refer you to a known good script that does that, but I don’t know of one. This guide might help.

100MB LAN is not enough bandwidth to handle DSD512 effectively

DSD512 is around 50Mbit/s, so even a lowly 100Mbit Ethernet should cope with it just fine. Now if they are attempting to push that over Wi-Fi, that is a whole other story, and likely to be a big fail…

Edit: Should have read the rest of the thread. I see others have already pointed out that DSD512 is roughly 50Mbit/s. Sorry.