Enhanced instead of lossless when playing MQA

Using a Mytek Brooklyn Bridge, it used to show lossless purple light, but now it does not

I don’t have MQA files or a Tidal subscription myself, but I would say that this is correct: MQA by definition is not a lossless format. You can see this on your screenshot where it says that it receives a 48kHz flac file, in which an MQA file of 96kHz is encoded. As the original sampe rate is twice the sample rate of the flac file, this is a lossy encoding.

You’ve got an MQA file so after encoding the signal will show enhanced.

Ok, so everything is perfectly setup? The weird thing is that last week it showed “lossless” and now it’s enhanced, I did not touch a thing on settings…

So I guess this signal path is right then

Ok I have just open up Roon again and now it shows lossless, im confused now

Haven’t touch a thing on settings, is there a reason why?

That one came in as 44.1 and went out the same so lossless.

Hello Franz–MQA is a process that fixes many errors in standard processing in what is called Hi Rez recordings, according to the MQA info and papers I have read. Since it changes that file, it is by definition not lossless. However, it maintains that all the info that is relevant is saved, and only noise is taken away, so that it can produce a smaller file that can be streamed, and later decoded to as high as 352 Khz, if the original Master Tape was at that resolution. I have spent many hours listenting to MQA and to my ears on a very revealing system, its much better that any of the other formats out there. It gives me the best musical experience. There are good recordings at lower resolutions also. I consider MQA capable of the best reproduction possible at this point, from a theory standpoint, and from lots of listening.

But just played same song as first pictures and now shows lossless, it makes no sense, there’s got to be something wrong with my setup, or why it suddenly changed from “enhanced” to “lossless” on same song?

Look at this new pictures for comparisons

Can you try updating the network firmware of the device?

To update the “Network” firmware on the Mytek Brooklyn Bridge, scroll to the “Device / Info” option on the screen, hit the corresponding button to enter the screen, and then press one of the buttons on the side of the screen that says “Update”.

Thank you @dylan, already tried that, both network firmware and unit firmware are up to date, I even restored twice, same with roon, any other ideas to try?

Your Device settings for MQA abilities should be set to renderer for the Brooklyn DAC not decoder as Roon will perform the first decode and Roons mqa decoder should be on.

Already tried that too, still the same result, thanks

I have had this with my dragonfly Cobalt a few times. A reboot of the device it was connected to sorted it and it then started to show the orfs render bit.

Are you sure it’s all set right. As it’s not showing Roon doing the core mqa decode.

Here’s mine for my Dragonfly which can only act as a renderer. I think the mytech can perform the core decode and renderer in one. 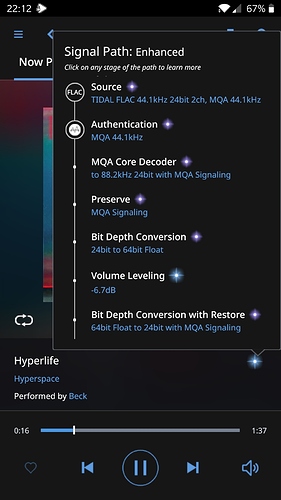 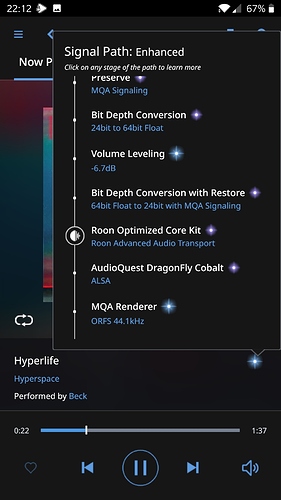 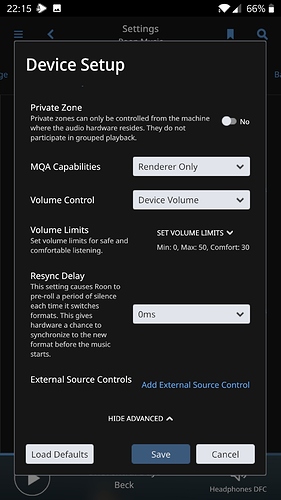 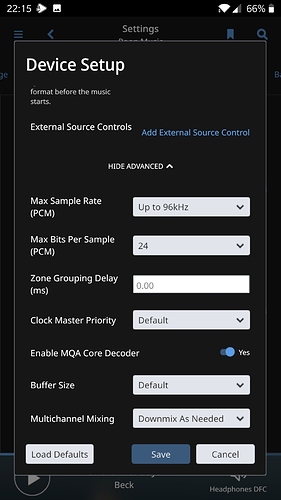 Perhaps turn of Roons MQA decoder and set the Mytech to decode and renderer this wont show up in the signal path though.

Im pretty sure I have tried that and all combinations, but im trying again just in case I missed something, thanks

Didn’t work, im pretty sure my roon has a glitch

yes, I also use it that way, but the result is still the same, “enhanced”

It will always be enhanced nothing changes there thats what MQA is as its applying upscaling and filters outside of roons control , but your signal path is not what it should be regardless. Maybe try resetting roons settings for the device, something might have gone wrong somewhere. Check the Brooklyn is configured correctly as when you look at the signal path, Roons MQA core decoder should be directly after the MQA Authentication from Roon. In your pictures its the Brooklyn doing the MQA core decode after the mac and then nothing else feeds back. As after that before the analogue output it should be MQA renderer stage which is the last stage in the MQA process.