Enhanced Work (Composition) Relations / Linking (based on, basis for)

When Roon - by metadata or tags - potentially knows about relations between compositions / works it would be a nice enhancement if links to related items in the (local or “remote”) library would be presented somehow; on the composition details page it could be something like for relations between artists (boxes with: “Is based on Work A”, “Was basis for Work B” …) and / or with “inline links” inside the composition details text. An example:

For this work, a composition by Vivaldi, I’ve performances present in my library. 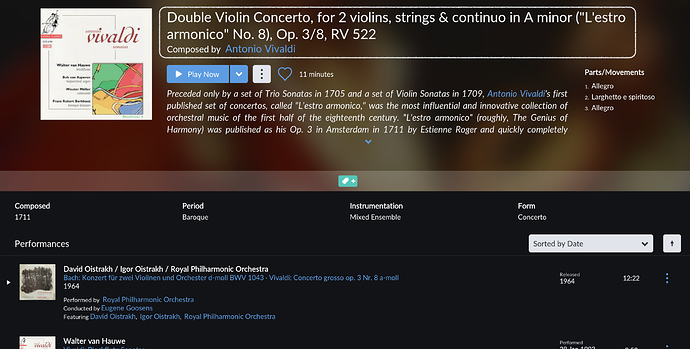 Also, I happen to have a recording of this work by JSB:

In theory this second work provides enough identifiers to actually link it to the piece by Vivaldi.

Now: wouldn’t it be cool if both compositions would be linked?

Would be very cool but would need to be encompassed within a larger structure for arrangements in general, not just “based on”. The question is whether it can be munged. I think not. The metadata are too various and inconsistent, even within single providers.

Someone once said that one of the providers does a good job with this. Was it Discogs?

I don’t know who said that - but what I know is that musicbrainz has a fitting metadata model. If it has (enough and quality assured) fitting data could probably spark a debate.