Ensuing track plays briefly then switches to another

When in playback mode where Roon selects tracks and artists similar to what is playing occasionally the first second of a track will play, then stop and another track starts.

How do I tweak Roon to prevent this?

Hey @dbtom2 – you still having this issue? Is it consistent? Every song no matter what, or just sometimes?

It has led to several more questions, all to do with corrupt files.

This happens whether I am listening to an album in original sequence or letting Radio select tracks.

This problem occurs as a corrupt file gets identified. What is puzzling is that the corrupt track being identified is the one that just completed playing all the way through. Played fine. Then as the first few hundred milliseconds of the next track starts playing, Roon skips to another track. However this track isn’t identified as corrupt. Furthermore, occasionally the next track gets skipped completely. It shows in the history but isn’t identified as corrupt. That’s two tracks skipped that aren’t id’d as corrupt after the track that played fine but gets labelled corrupt.

I’ve been trying to research the tagging on the corrupt files to discover why they are labelled as corrupt. I’m pretty sure Roon doesn’t analyze the audio file itself for corruption. (I have tested this with some tracks that have defects. These don’t get labelled corrupt and play through, albeit with imperfections to the audio.)

Earlier in the week Roon had identified about 7400 of my tracks as corrupt. I have selected them for re-analysis and the count is down to about 100. During this time I think the software updated at least once so perhaps the later versions of Roon have updated algorithms to detect corruption. My normal instinct is to give the benefit of the doubt when an expert - in this case, Roon - says there’s a defect in my work. (After the usual denial, bargaining, anger, etc. sequence.) But 7400 is a lot of files. And I am re-ripping my collection to ALAC/FLAC so I will work through this. It’s just that the files play fine on iTunes and BitPerfect. 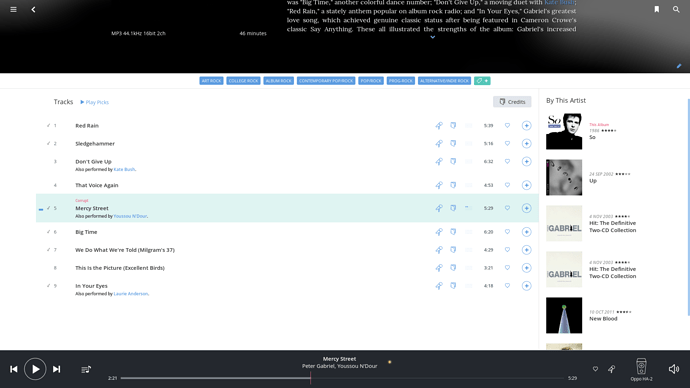 But the song that’s playing isn’t “Mercy Street.” It’s “In Your Eyes.”

Note that the album selected in from my local iTunes library. An MP3, ripped to 320kbps.

Here is what iTunes reports: 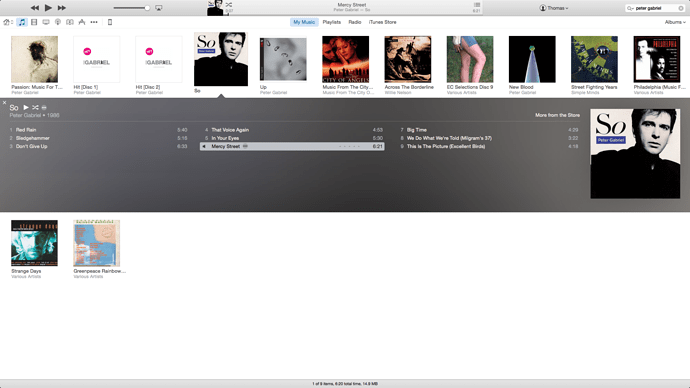 Note the difference in the number of tracks in the album and the track number of Mercy Street and In Your Eyes.

I haven’t noticed this before. I posted this message here because it seems to relate to a file being labelled corrupt by Roon and how the subsequent tracks get skipped.

Hi @dbtom2 – can you let me know which issue you’re still experiencing here? Skipping tracks? Tracks being flagged as corrupt? Differences between your iTunes library and what you’re seeing in Roon?

Happy to look into all of the above, just want to make sure I understand the current situation. Thanks!

The problems seem to be “all of the above.” It still skips ensuing tracks after marking the track just finished as corrupt. The ensuing tracks are not marked corrupt, just skipped. (However, they do appear in the history. I’ve been limiting my listening to Tidal via Roon since discovering this issue.

I use a Seagate 1TB external drive to hold my iTunes Media and iTunes library file. Via firewire to a MacMini.

I played the “So” album via Roon again just a moment ago. Played Track 1 “Red Rain” though fine. Skipped tracks 2 & 3 and marked Track 1 as corrupt.

I am playing another album, The Jayhawks, “Hollywood Town Hall” right now. Roon has previously marked the first four tracks as corrupt but is currently playing track 1.

Track 1 played through. Track 2 played for a fraction of a second and then Roon skipped to Track 4. I re-selected track 2 and it is playing now. I have Track 3 selected to play next.

Okay. Track 2 played through. But an error message appeared above the transport controls just as track 3 was getting ready to play. Something about “interrupted…” It disappeared too quickly for me to read the whole message. The played skipped to the next track.

The track listings on Roon and my iTunes library for this album, Hollywood Town Hall, are in agreement.

What brought my post up was the difference in the track listings for my copy of Peter Gabriel’s “So” album and whether’ this discrepancy is why some tracks get marked corrupt or skipped by Roon. I am on the latest build (29, right?) and watched as Roon re-built the databases as the upgrade took place.

Let me know what I can do to help with this.

Hi @dbtom2 – sorry for the delay here. I’m going to follow up via PM so we can get some more information about what’s happening here.

Apologies for the inconvenience!

5 posts were split to a new topic: Skipping from track to track