EPs appear in the album section instead of the EP section

See the screenshots below for one example. I have the Shamen EP “S.O.S” - despite being labelled in Roon as an EP, it appears under “Main albums” intead of “Singles and EPs”.

How can this be?? 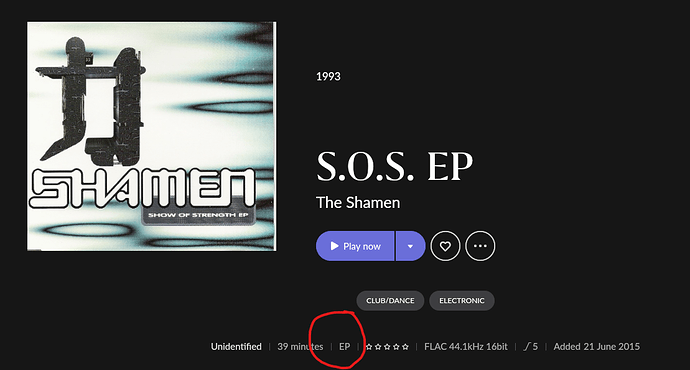 It is also showing as “unidentified”, I wonder if that might be part of the issue.
Can it be identified by Roon and then see if its placement changes?
Although at 39 minutes its truly hardly an EP…lol

Thanks for the input @TheHammer . So if an album is not identified by Roon, it doesn’t respect the album/EP/etc data?

I honestly do not know but as I said, it might affect it, it was just a thought that occurred to me.
Maybe someone else will know for sure.

So if an album is not identified by Roon, it doesn’t respect the album/EP/etc data?

No, that isn’t the case. I’ve just checked, and I have quite a few unidentified EPs that are shown in Singles & EPs, not Main albums.

Well, you were right - it did affect it. I couldn’t find an exact match, but found someone close enough. And it was tagged as a single rather than EP, so that may have affected it also. At least it’s in the right section now though!

Having this issue again. See the single “Weekend Wars”: 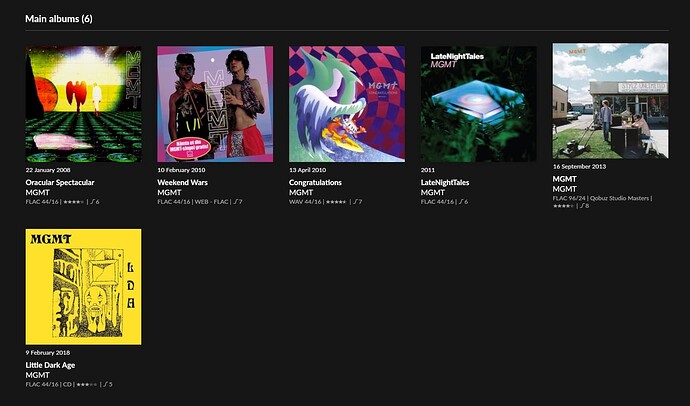 This single appears to be recognised, and is correctly tagged as a single - yet it appears under “Main albums” ! 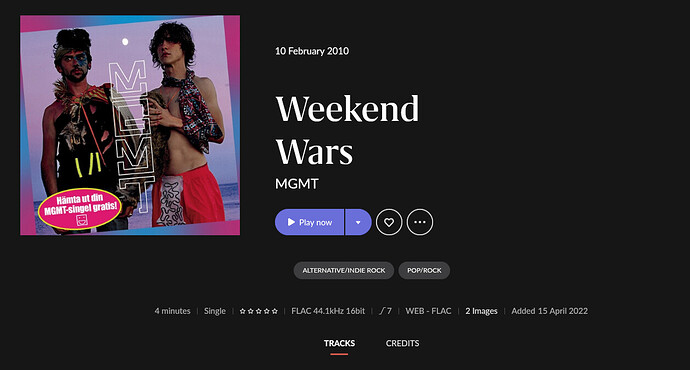 It’s unequivocally a single - it’s a single track! I tried changing the metadata in Roon and switching it to a single manually, but no change.

EDIT: about 2 minutes after making the change, it seemed to switch. Maybe Roon is slow to refresh something?

Yup this is definitely broken and super annoying! I have a bunch of eps and singles showing up under main albums on discography page. They have all been manually tagged as eps or singles. They also show up in singles and eps section so it looks like there are duplicates but even when I try “group alternate versions” like you normally would with duplicates they still show up in both main albums and singles and eps. They are all identified so that isn’t the issue either. I’ve also closed and opened, restarted the whole pc and given roon hours to refresh or whatever it needs to do but it’s still all messed up. How is 1.8 still such a train wreck after they’ve had more than a year to fix it? I just updated from 1.7 earlier this week and I haven’t found one thing that is better about 1.8 it’s literally only bugs and worse ui. How can I roll back to 1.7?