Everything was fine until I added a watched folder, now I have duplicates of everything

I’m running a Roon Nucleus that connects via usb to my hifi.
(Roon Version 1.7 (build 667) stable

I used to manually copy over new music via Carbon Copy Cloner from my iMac to my internal ssd on the Nucleus.

I decided to add a “watched folder” which was my iMac music folder to avoid manually copying over the music.

It scanned the folder and re-added all my music.

Is there an easy way to delete all the new albums added?

Any advice or solution welcome.

Turn this off, I think. 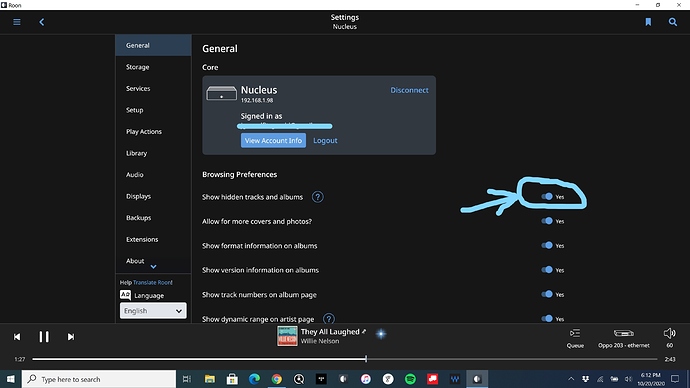 Is there an easy way to delete all the new albums added?

Disable or remove the new watched folder that you created that points to the Mac, then in settings perform a library clean up.

Then you will be back to we’re you started from.

PS If you don’t do so already it’s very prudent to take periodic backup of the Roon database.

Hey Jim; your hide hidden suggestion works, thanks. Is there any reason not to do this?

My method, you still have two copies of everything, I think. Carl’s method, you actually get rid of the extra copy, I think.

I guess it’s possible your music files are the same either way, with only one copy. But, in the Roon database, they might be referenced more than once if you don’t do as Carl suggest.

If you have two identical folders being watched, you are telling Roon you want two copies of each album in your library.
Regarding the two methods, it’s better to just have one copy of everything. You will double the size of your database with two copies, for instance. So you can tell Roon to ignore the extra copy, but Roon knows it’s still part of your library and will treat it as such.
Is there a reason you want to have two copies of your music available (the internal storage and the iMac)? There may be a solution for that which is cleaner than having two identical or very similar sets of data available.

My music is on the internal ssd of my nucleus.

I just added one watched folder on my computer.

Here’s mine. It’s an SSD that I installed in my Nucleus and copied my few albums to it. 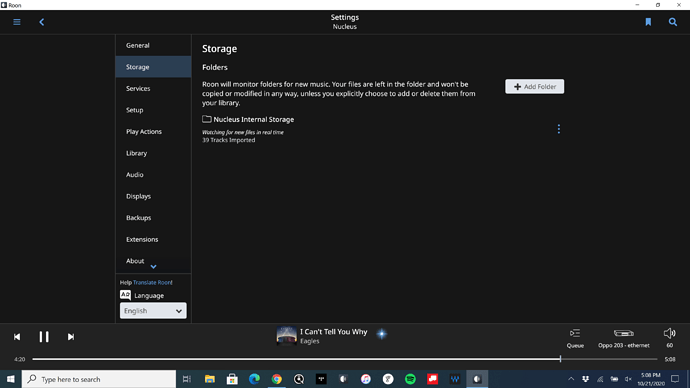 But, if the watched folder you added is the same music as the music on the internal SSD of the nucleus, then yes, it will be duplicated in Roon. You can either hide it as I suggested earlier or remove it as Carl suggested. Normally, you would not want the same music being watched by Roon from two different locations.

Yes! The watched folder I added is the exact same as the internal ssd!

I assumed it would only add new music and not the duplicates.

Disable or remove the new watched folder that you created that points to the Mac, then in settings perform a library clean up.

Then you will be back to we’re you started from.

PS If you don’t do so already it’s very prudent to take periodic backup of the Roon database.

You need to do this if you want to get rid of the duplicates, then. After you do that, don’t connect to another drive that contains the same music that you have already copied to your internal SSD. You can, however, just copy the “non-duplicates” from the other location to your internal SSD.

Ok, will do. Many thanks.

So I if maintain a music library on my computer and would like Roon to copy any new music I add to it…but not the music it already has; is that possible?

Is there a way to automate copying non-dupes?

Yes, make a new, clean watched folder on your computer and only put new music in it. I guess another way to do it would be to delete all the music from your internal SSD, but I don’t want to recommend something that might mess you up.

Or maybe I just stick with my carbon copy cloner method, which is manual but works.