Is this kind of usage considered normal? I recon VIRT means not a lot, but no other process does and it came to attention only recently. 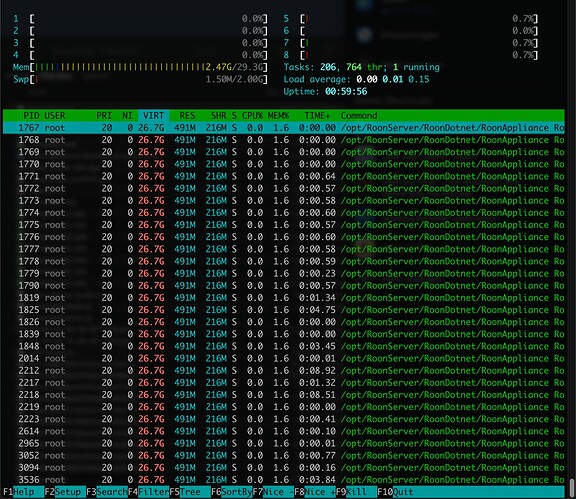 This is completely normal…

Thanks, so its not only on my machine. But if you have it too, does it make it normal / good? It still seems odd and an explanation from a dev would be cool why there are so many processes spawned and quite all available memory preallocated.

But if you have it too, does it make it normal / good?

Well, I meant that this is the normal way with Roon, so nothing amiss with your system. Roon definitely is a memory hog…

Yep honestly I understood - really thanks for sharing your htop. It actually really helps to know with my setup everything seems allright. Still seems odd though generally.

You run Ubuntu Desktop it seems? There are so many tasks and threads…

correct, i used it as a dev machine before then decided to make it a server.
Edit: im not logged into the DE.

BTW, on my machine there are also many threads pertaining to RoonAppliance; about 76-80 at the moment…

28G just seems a lot to me for a headless App. Not even Firefox seems to do clog that amount of ram. In your Htop it even reserves 25G while while you only have 16G Ram. Seems not right. If mono works similar to java problably some xm parameters are off in the start script?

Roon server on Linux has been ported to .NET some months back. This is not Mono anymore. I’ve only ever paid attention to the resident memory usage… when this increases (e.g., during metadata downloads), the performance goes noticeably down. But, by any means, Roon server now behaves much better than back when it still was based on Mono.

I wasnt aware there’s now officiall dot net under linux until now, cool sort of. But wasnt there previously a RoonServer.exe running on wine?

The Windows version of Roon has been using .NET from the start. The Linux version of Roon server has been ported not so long ago, and work on porting the Mac versions is under way at the moment.

Really good to know the other OS versions are not mere emulations anymore. It always seemed strange to develop a windows app then emulate it in their own server hardware based ofc on linux. Too sad they are closed source. I love roon. but especialy the client could use some rework from a pro. As it seems they are made with a multiplatform framework, which never works out good.