All of a sudden when playing an MQA file the blue (or green) light on my Meridian Explorer DAC no longer appears.

There has been no change in the setup and prior to now the blue (or green) light appeared on the Explorer when playing an MQA file.

I have quit Roon, unplugged the microRendu and the Explorer but still no blue light. I am quite certain I am playing MQA files.

I have two white lights on the Explorer.
Some screen shots below: 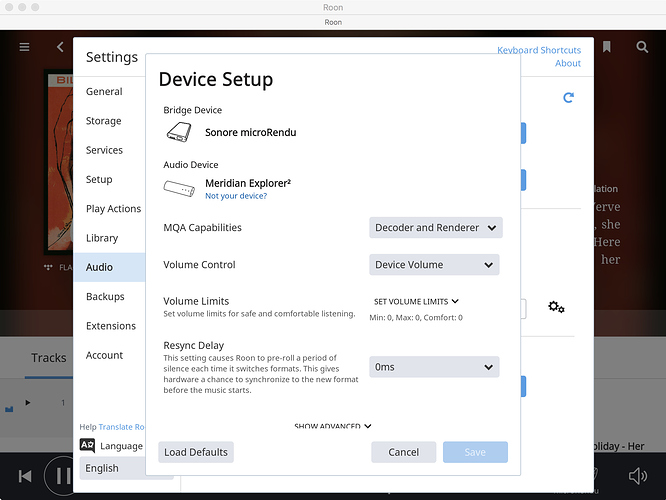 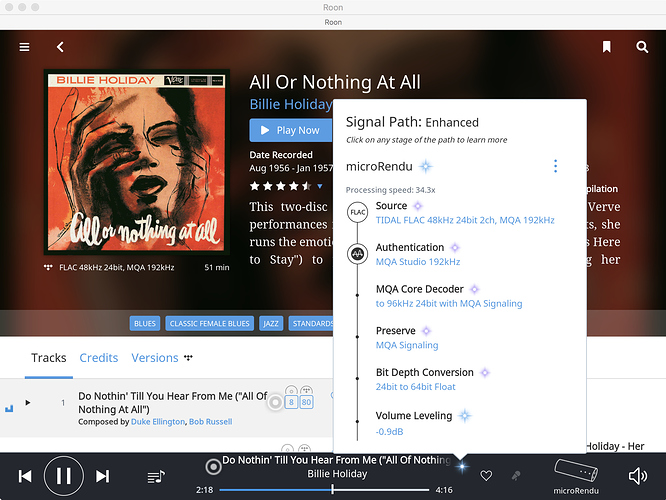 Please note the signal path in Roon shows the file is 24/192 and the MQA authentication is 192.
But, MQA Core Decoder says, “to 96 kHz 24 bit with MQA signaling.”
My understanding is the Explorer can play up to 192 so why only 96 kHz in the line I just cited above?

Many thanks for any help!

@Geoff_Mirelowitz There is a known issue with the Explorer2 and it needs a (yet to be released) firmware update to correctly render the decoded MQA output from Roon.

You are only seeing 96k, because this is how decoded, but renderable, MQA content is transferred to MQA DACs. Once the new firmware is released by Meridian, the Explorer2 will further unfold/up-sample the MQA content to the DAC’s capabilities.

Turn off volume leveling and DSP engine. See if you get the blue light back.

@joel and @wklie
Thanks to both of you. Peter I did try turning off the DSP engine. I did not think to try turning off volume leveling. However Joel’s reply makes me think that won’t work either.

Joel in light of your reply I wonder if there is any point to leaving my DAC set to “Decoder and Renderer” in Roon. Might I just as well change it to “No MQA Support” or “Decoder Only”?

However Joel’s reply makes me think that won’t work either.

If you don’t run DSP in Roon (including volume levelling), with the “Decoder and Renderer” setting, Roon will send the bit-perfect MQA stream to the Explorer2 where the full decode and render will take place.

If you want volume normalization (or other DSP like cross-feed), then decode in Roon to 88.2k or 96k is as good as you are going to get for now.

Have Meridian posted anything anywhere regarding this problem?

@joel
@Ratbert
@wklie
I am reopening this discussion because I have some new information I would like to share. I have been in touch with Meridian America and they do NOT confirm that the absence of the blue/green light on the E2 is a “known issue” or that any firmware update is required.

I performed some tests and the results suggest they are right. Whatever the problem is, it is not a Meridian E2 problem.

To briefly summarize the results of my tests:
I have used the E2 in two different setups.

In this setup when playing an MQA file via Roon I do NOT see the blue or green light on the E2. Roon does show an MQA stream however. In this case the microRendu is my Roon endpoint.

Setup 2: iMac>E2. When playing the same MQA files I DO see a blue or green light on the E2. And of course Roon still shows an MQA stream. In this case the iMac is my Roon Core.

In both cases the Device Settings in Roon for the E2 are the same.

Meridian has suggested that the problem somehow lies with the microRendu. Originally I challenged that, but the results of my tests suggest empirically they are correct.

Sonore/Small Green Computer denies that its device could cause this problem. They have told me:

"All we do pass the data we are sent to the DAC so something most be wrong with the data. I would start with volume at 100 percent or look for any other form of DSP setting in Roon.”

However I have disabled DSP and the problem exists no matter what Volume Control setting I choose. And again, these Roon settings are the same in each of the two setups I get the blue/green lights in one, but not the other. So those settings can’t be the problem

Could there be some other explanation?

PLEASE take a look at my latest post on this thread. The folks at Small Green Computer have specifically asked me to “Ask Roon” about this issue.

Can you upload a screenshot of your microrendu Roon Ready configuration page? You should be able to access the device by going to http://www.sonicorbiter.com in your browser.

I have opened Roon on my core device. Here are the screen shots I think you are asking for. If you need something else or something more, please let me know. 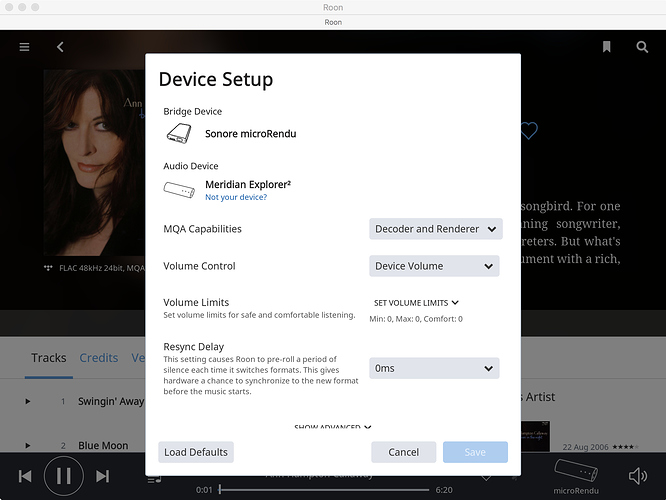 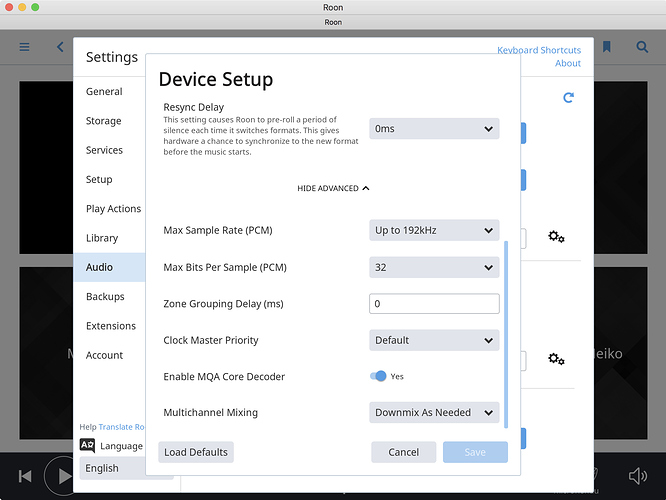 FWIW there is music playing through end point now (although I am leaving the house for awhile and will not see any replies here for some time).

I was able to take a quick glance at the logs, can you make sure that volume leveling is disabled for the microRendu zone?

I have turned the volume leveling off and…voila, the green light appears on my E2 DAC while playing an MQA file.

The only question for me is whether or not the Meridian Explorer² can act as a MQA renderer after Roon first unfold with DSP applied (I am using Allo USBridge). If it can’t, I will not worry about it any more.

At the moment, the Meridian Explorer² is unable perform MQA Rendering if the Core Unfold was done in software before reaching the device. Meridian is aware of the issue and are investigating potential solutions, but they have not committed to anything at this point in time.

John now I am really confused!

You’ve just helped me solve what I thought the problem was. I now get the blue or green light on the Explorer 2 DAC as I explained above. So my understanding is my Explorer 2 IS now rendering.

Meridian’s reps in the U.S. deny the problem you just stated.

Almost two weeks ago I wrote to them and reported exactly what was said on this thread:

“There is a known issue with the Explorer2 and it needs a (yet to be released) firmware update to correctly render the decoded MQA output from Roon.”

Here is the reply I received, word for word:

"That information on the E2 is very old, look at the date.
"You need to go into the audio properties of the E2 in Roon, and set it to unfold and decode mqa.
“All will Be well after that.”

Can you – or someone – clarify further?

The Meridian Explorer² is a MQA Full Decoder, meaning that it is capable of performing both the MQA Core Decode (1st unfold) and well as the MQA Rendering (2nd unfold). When used as an MQA Full Decoder, playback in Roon as well as any other bit-perfect streaming application will allow the device to perform the full MQA process.

@john
Thanks very much for your reply. I wish I understood the issues involved well enough to say I understand it.

If that is true, why am I now able to see the blue light on my Explorer 2 DAC when playing MQA files through Roon?

Does this mean that with no DSP operations, Roon is not

I thought Roon’s ability to do the “first unfold” of the MQA stream did not rely on DSP. I though DSP was something additional.

I thought with Roon v. 1.5 that Roon did the first unfold and my Explorer 2 DAC (or any MQA renderer) would do the second unfold.

Finally you did not address the specific question I posed regarding a necessary firmware update for the Meridian Explorer 2 DAC. Meridian America denies any such firmware update is needed or being considered. Are you speaking to someone else at Meridian, possibly their primary developers in the UK?

I hope my tone does not come across as either critical or unappreciative of your efforts to help me. Because the opposite is the case. But the more I try to understand this, the more I fail.

I am one who loves both MQA and Roon. But as long as it seems that one requires some sort of audio engineering degree to understand how MQA works and is utilized by Roon, it seems unlikely to me MQA will develop the acceptance I had hoped it would.

I certainly understand the frustration at trying to wrap one’s head around all of the different scenarios that can be involved with MQA playback. We’ve put a lot of work into our MQA implementation to provide the best out-of-the-box experience for the large majority of our users, wether they have an MQA capable device or not. In fact, for our MQA release, we profiled every MQA capable device in the market in order to provide the best default MQA playback setting per device so that our users would not have to worry about figuring things out for themselves.

Due to factors outside of our control, there are some quirks with a limited number of MQA devices that prevent full MQA functionality from working in certain scenarios. As we’ve discussed, the Meridian Explorer² is an MQA Full Decoder. An MQA Full Decoder can be broken down into two components, the MQA Core Decoder and the MQA Renderer. Some devices are unable to engage their MQA Renderer unless the MQA Core Decode has happened on the same device, the Meridian Explorer² being one of those devices.

In Roon, the Meridian Explorer² should default to the MQA Capabilities being set to “Decoder and Renderer”. With this setting, as long as DSP is not applied to the signal, Roon’s own software MQA Core Decoder will not engage, passing through the bit-perfect MQA stream to the device allowing it’s own MQA Core Decoder to do the work and thus allowing the MQA Rendering stage to also occur. With this setting, Roon’s own MQA Core Decoder will only engage if you have applied DSP to the signal. According to the MQA spec, MQA Full Decoders should recognize if an already Core Decoded stream has been passed to them and still engage the MQA Renderer stage. Unfortunately, the Meridian Explorer² is not able to recognize the MQA Core Decoded stream at this point in time, it only recognizes it as a regular 24/96 PCM stream. Meridian is aware of this limitation, and they have told us that they are investigating if they will be able to provide this functionality but cannot commit to anything at this time.

I hope that clears a few things up, I’m happy to answer any further questions!

@john
Thanks so much for your patience and your explanation. The only question you did not answer is which spokesperson for Meridian you are relying on.

I am going to assume you are referring to the main Meridian office in the U.K. I will get back to Meridian America to let them know they are not fully informed.

Any chance of Roon providing a list of which DACs CAN work fully with Roon’s MQA implementations? Or at least a list of which fall into the category that my Explorer 2 does?

I would hate to buy a new DAC and find the same limitation. What about the Pro-Ject S2, often discussed on this site?