I exported my files from Roon for the purpose of converting to mobile devices, my car, etc. (I wanted to take advantage of Roon’s ability to Focus, including by format and resolution.)

But many albums ended up split across directories, apparently because individual tracks had different artists. This is a serious problem, impairs recognition and navigation in the other devices.

Roon should base it on the album-level main artist.

What build are you running on the client you ran export on ? The album artist for export was recently fixed.

88 on both server and remote.

I’ve done a ton of exports on B88 and don’t think I see this issue.

Can you examine an example?

Was it fully ID’d?
What were the artists shown on the album screen?
Is it a various artist?

Pretty common. One example is Sangam by Charles Lloyd. I get these directories created in the root:

(There is a directory just called Charles Lloyd, it contains other albums but not Sangam.)

Each of those directories contains a subdirectory Sangam, each of which contains one or a few songs.

I don’t know what is the difference between the two rows of artists in the Roon presentation, which are really primary artists and which are only so-so. But in addition, there is track-level metadata with primary artists listed and that’s where the directories come from.

Btw, this was a ripped CD, fully identified.

Pretty common in my library. Both CDs and downloads.

Suggest @vova take a look at one of these albums.

I agree, @vova, lets get an album and look at what’s going on.

We switched over to using the album-artist string for export directory structure + tagging a build or two ago (this should have happened with 1.1, but was missed at the time).

There may be a bug here. What you describe sounds wrong.

@brian @vova Many other albums, let me know if you need more data.

Uploaded Charles Lloyd/Sangam, the same album I mentioned in the post.
This was a CD rip.
Same problem happened with Buena Vista Social Club, downloaded from HDtracks.
And many others, both rips and downloads.

But this was not a factor in the fragmented structure; I have other albums with a similar artist grouping at the album level, including Charles Lloyd/Notes from Big Sur.

I’m convinced the issue is the track-level credits, where Notes from Big Sur shows only Charles Lloyd (listed as both composer and primary artist); on Sangam, the tracks had different credits, mostly the same for the artists but different composers.

Hey @AndersVinberg – sadly neither @vova nor myself can reproduce this 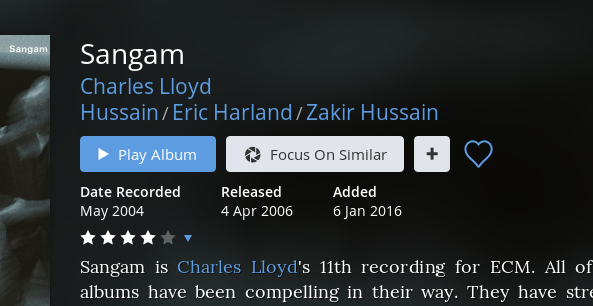 Like @brian mentioned, there were some bug fixes for exporting recently. Any chance you’re running an older version on your remote?

Can you confirm exactly the steps you’re taking to export? I used the + button shown in the screenshot above, next to Focus On Similar.

Also, can you try exporting to a totally clean folder – I’d like to make sure this happens with a new export location.

I’ll check again tonight. AFAIK, up-to-date server and remote, empty folder, but I exported a bunch of albums at once, using the plus-button up in the album browser. (The purpose was to export my entire library into different groups based on resolution, so I could convert it to WMA appropriately: the Burmester system in my car supports lossless only through WMA, and up to 48/24.)

@mike @vova @brian I apologize – tried to replicate it and couldn’t, and realized that the export from Roon was good, the album came out with track-level metadata in the FLAC, and was in the conversion to WMA where dBPoweramp created the bad structure based on the track level artist.

All my fault. Sorry to have wasted your time.

@ncpl I realized the failure was in the conversion to WMA, the Roon export was good. More in the thread. Apologize.