When I use Roon where the zone is a television in my house, or when I cast Roon to a Peachtree speaker and display the album artwork on the same television, the tracks flip by at a quick pace. In the first scenario, Roon will play after ten or so flip by, and in the second it never stop allowing me to capture this behavior on my phone. Here is the clip.

Can you elaborate on your networking setup? What is the router in use? Are you using any switches or other networking devices? How is the Peachtree that is exhibiting this issue connected to the network?

My library is stored on a Synology DS214 NAS and is accessed via Roon ROCK using an Intel NUC8i7BEH. Both devices are ethernet connected to two serially-connected switches, and one of the two switches, in turn, is connected to a Google mesh router.

The Peachtree speaker is the Deepblue2. It is connected via WiFi using the Google Chromecast Audio streamer. The television is connected via WiFi using Google Chromecast HDMI streamer. Just to be clear- using the Peachtree/Chormecast Audio is where I get the prolonged fast forwarding. When I stream directly to the television, it happens every now and then (but more “now” than “then”).

Let me know if you need any additional info. Thanks for your assistance.

Hello @David_Weinberg, and thanks for giving us all this info! Hey, do you have this issue when playing directly to system output on the core?

I only have this issue when connected to the television in the scenarios I described earlier. My main listening is done using the Chord MojoPoly. Roon works fine with the MojoPoly (and using bluetooth to the Deepblue2 and other speakers).

Outside of that, please elaborate on what you mean by playing directly from the system output of the core. Do you mean I should play direct from my NUC via the headphones?

Hey @David_Weinberg, could you try playing to the system output of one of your remotes instead of the core. For example, use your phone’s speakers. You can do this by going to Settings>Audio and choosing system output on your phone/other remote.

Got it. Plays fine from my phone. 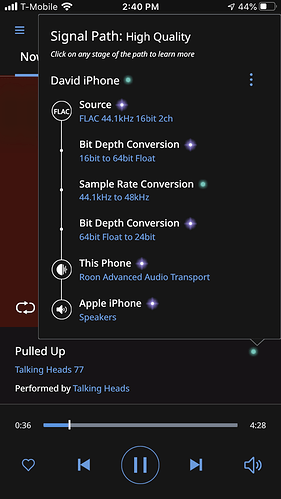 Hello @David_Weinberg and thanks for testing that! Now that we’ve confirmed that not all endpoints are affected, I’d like you to recreate the original issue using your Chord MojoPoly and message me here when the issue occurs. From there, we can enable diagnostics and get the results over to our team for closer inspection.

The issue vanished as mysteriously as it arrived. Very strange, but all is well.