Took a while to update database, now all seems fine on remote, checking on ARC.

Not there yet according to announcement:

There’s still some work to do on this feature (including adding support to ARC), so it will likely stay in Early Access for a few more weeks.

Wikipedia articles are so great feauture. For me its MUCH better than Arc

Finally I can see many many artists who were completely unknown for Roon. Finally!

It may be one of those things, but with Wikipedia as my first choice for info, I’m finding it hard to successfully tap the ‘more’ down arrow, on both iPad Pro and iPhone 13 Pro - it’s currently taking six or more taps to get it to work.
Another (resolved) thing was that initially, whichever way around I set TiVO and Wikipedia sources, Roon would always default to TiVO. A quick restart of Roon server has sorted that though.
Very pleased with the Wiki addition - thank you!

Having the same problem with taps, glad it’s not just me going mad.

Absolutely love this addition though, so cool to have lots more to read while I listen to music

Would be nice to be able to switch between preferred languages in the album review.

For instance, artist 99 Posse, I am reading the Tivo version, hence Tivo is purple. English & Italian WP articles exist, hence white. (Spanish WP is enabled but has no article, hence not listed - good)

This already confused one person here, and I did a double take as well.

B1159 crashes on wikipedia

The English wiki link is not highlighted, but I tapped on it anyway. The app freezes.

(It should not freeze, but note that there was confusion about tapping a white entry)

I would switch the colors, white for the currently displayed one (which is consistent with the majority of the text in the review as well) and purple for switches/links to other sources. To avoid too much purple, maybe a light plain font

Would be nice to be able to switch between preferred languages in the album review.

You can. Go to Settings > General > Editorial sources. Enable other sources. Then click the downward arrow v below the review, the links to other languages will be shown on the right (if articles exist)

Toggeling between languages. Now i have 3 languages in my settings. I’m sure that for instance Beatles’ Revolver albums have Wikis in both Danish and Norweigian too.
Edit…… I see now how it works. Thanks.

Just to say that this is a fantastic feature and in general extremely nicely implemented. Roon is getting better by the week

Use case:
My native language is German, English good second. Then in decreasing order I can handle a bit (if I know what it is about) Spanish, Italian, barely French, and maybe some other languages. Therefore, if the only available review is in Italian, French, or some others, I’ll take those. But I don’t need to see them all the time. Currently I have to select them all in Settings (plus Tivo in any case), and for well-known artists/albums I get a very long list.

Suggested solution:
If the source selection had 2 levels, “show always” and “backup”, the list of sources to the right of the review/bio could roll up “backup” languages and show them only when no “show always” languages exist, and after a click (in case I want to check the Italian page for an Italian artist anyway, even though English and German exist)

One could also use the existing order from Settings and show the first 4 or so, while hiding lower ones automatically. This might simplify the settings UI. However, who knows, some people may be able to read 10 languages and would always want to see them all. (And I can imagine that it would be infuriating if someone had 5 good languages and the 5th always gets rolled up) 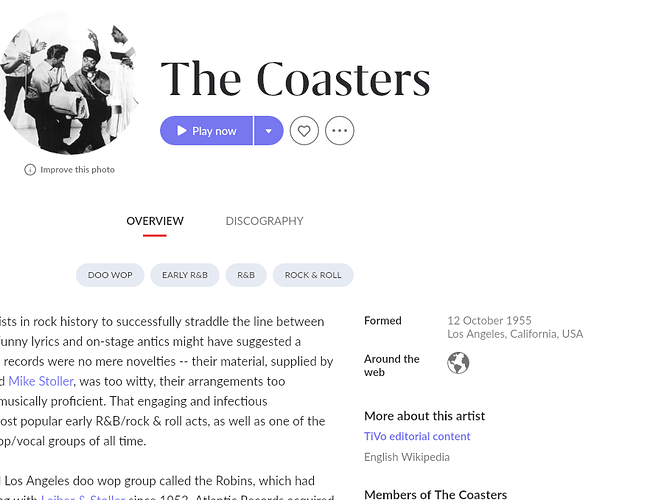 Do you have to turn off TiVo to get Wikipedia to show automatically?

Somewhat surprisingly, I have for now switched back to Tivo first, though having WP optionally is really great.

And had to do the same procedure for iPad remote.

When changing around things in the settings (enable, disable, reorder), Roon freezes up sometimes and I have to kill it, happened twice so far. However, I am using the Windows remote on Wine/Linux, so might be that. However, it normally never crashes.

I have for now switched back to Tivo first

Maybe it’s just what I am used to, I read them quite regularly and I am on the same few artists and albums for long times (huge editing project).

I do feel, however, that most of them have a more editorial, or maybe it’s casual, feeling to them, which seems to fit me better when in the music mood, at least by default. Not always but quite often, WP articles start quite dryly and factually - which is good for certain things, but apparently not my default preference. In the best case, they still have a bit of a Wikipedia language to them. Difficult to put a finger on it. 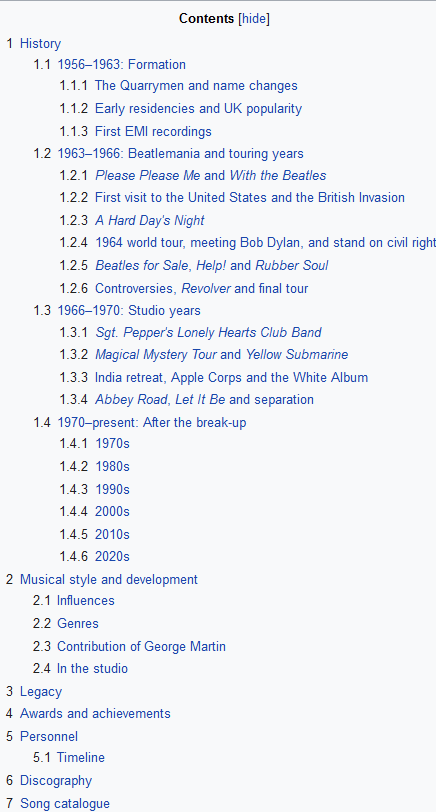 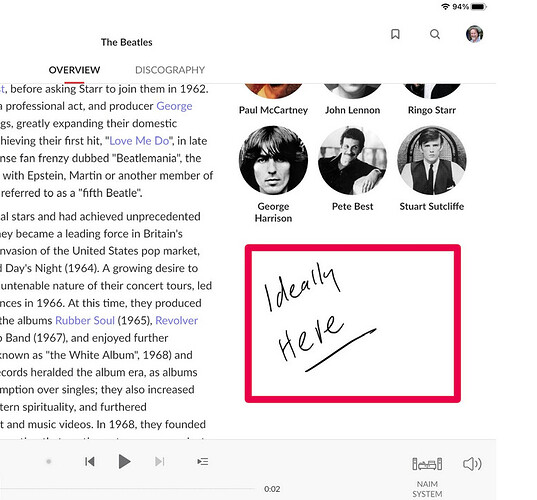 This is great. I used to go to Wikipedia often before this. Now it’s right there. I think I will still stick with the TiVo content first as I like something with opinions more that just descriptions. Anyway it’s great to be able to switch so easily between them.

How about a link to the Wikipedia discography section from the discography page for each artist. One of my main reasons for going to Wikipedia is to find a full discography.