Files play in Windows, but show as corrupt in Linux

I have been using Roon for a while on Windows 10 and just got a new Ubuntu Server machine:

I installed Roon and copied all the files from the Windows box, but of around 15000 track, 250 show as corrupt in Linux (in library settings) that were fine in Windows. I ran diff on the source (mounted cifs) and destination (local drive) on one example, and it showed no difference. ffmpeg happily converted the file to .wav, though it noted ‘Skipping 543 bytes of junk at 103.’

I shared the file I was working with at https://1drv.ms/u/s!Ar41Zo1J6s00g9xsfAp9dUORP5jwSQ (please don’t judge me…)

Thanks for the media @Michael_Isard – we’ll take a look.

Do the files play from your Linux Core, or do they fail to import completely?

They fail to import, and are listed in the failed imports in settings.

Thanks @Michael_Isard --we’ve reproduced, and opened up a ticket in our internal bug tracker for this issue. We’ll let you know more details once the media you sent has been analyzed.

Hi, @Michael_Isard, unfortunately the file that you sent us is corrupt, mp3val proves this fact 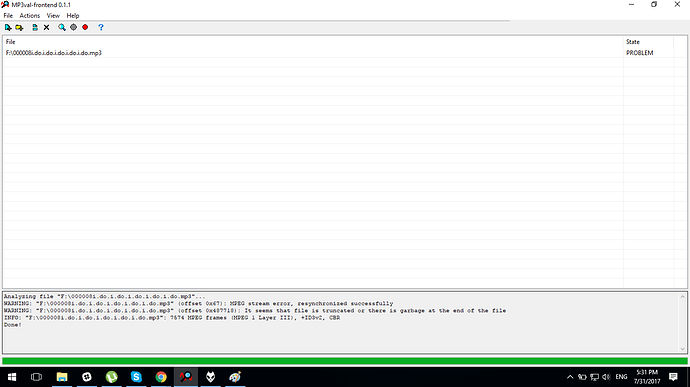 Anyway, thanks for your feedback, much appreciated!

OK. It does play fine from Windows Roon Core, and as I said ffmpeg on Linux is happy to decode it. Is there any chance you would convert this issue from a bug report into a feature request to be more forgiving on Linux of files with corruption that doesn’t prevent playback?

One last update: for the files I have so far tested,

is enough to fix whatever corruption there is, and they seem to play fine. (Scripting this to read the mp3 parameters of the input and recreate them on the output is left as an exercise.)