Many (most?) live classical albums separate out the applause into separate tracks. I don’t think this is common with pop/jazz. The metadata suppliers even credit these tracks as the composer “Recorded Sound”.

Who is the composer "Recorded Sound"? Metadata Issues

With my live albums, roon is tagging “applause” as composed by “Recorded Sound”. I can see a lot of credits but not “Recorded Sound”. Recorded Sound is treated as a composer like any other. So I can play all the applause in my library back to back, loop it, shuffle it, and even sort it by artist, date or location. Very handy. [image] This is obviously madness but is there something I can do with it? It’s quite a convenient way of grouping applause so I can hide it from my queue. But on the oth…

Other non-music sound effects are also separated out into separate tracks. For example “church bells”: 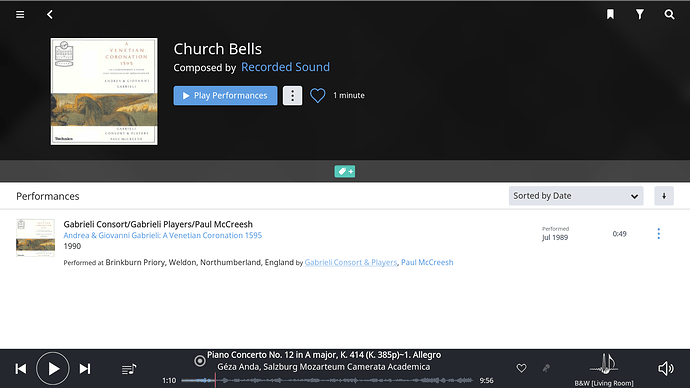 Most of the time I like the applause when listening to a live album. But often it randomly finds it’s way onto my queue disconnected from the track the applause relates to. Could there be a configurable exclusion / filter on the queue?

I think it needs to be a bit cleverer than a blanket yes/no exclusion. There are variations. I wouldn’t have though that anyone wants to listen to random disconnected applause on their cue (you never know

) but it is ok as long as the applause has been associated with the right track and some actually like it in those circumstances. Please take into account that these applause tracks can be either/or/both the beginning and end of classical music tracks.

I want to exclude a specific song from the radio