This is not obvious and perplexed me for quite some time so here is how to invoke it.

Being able to trigger random playback without visiting the queue is something I would very much like.

Hi John,
Just wondered if you have spotted the repeat loop icon on the left hand side of that playing bar?
Again it’s something that can be overlooked.

And I’m afraid it does not necessarily random play tracks with classical if the Queue contains works with more than one track (e.g. Handel’s Water music). It will go through each track of the work before moving on to the next one. So, in effect, it random plays works rather than tracks of the works. So, if it selects a track of a work you wish to move on from, you have to scroll through each track of that work before it will select a new one. If there is only one track of a work in the Queue then you will be lucky and it will immediately move to another. But if a complete work is there you are out of luck.

And I agree with Lorin - it is a convoluted way of achieving random play, something much simpler on SONY MP3 players and on Sooloos. But it was also messy to find on a Cowan player I used to own so Roon is not alone.

Bottom line for me is it does need a fix in Roon, something not apparent for pop albums but applies to classical.

So, in effect, it random plays works rather than tracks of the works

Yep, that’s been reported by others as well.

And I’m afraid it does not necessarily random play tracks with classical if the Queue contains works with more than one track (e.g. Handel’s Water music). It will go through each track of the work before moving on to the next one. So, in effect, it random plays works rather than tracks of the works. So, if it selects a track of a work you wish to move on from, you have to scroll through each track of that work before it will select a new one. If there is only one track of a work in the Queue then you will be lucky and it will immediately move to another. But if a complete work is there you are out of luck.

Just to be clear here – the designed behavior in Roon is based on the idea that the underlying unit of popular music is tracks, whereas for other genres (like classical), the underlying unit is works, and more specifically, multi-part works. Roon is designed to respect that distinction and handle it appropriately for fans of pop music, classical music, or both.

On CDs, classical music tended to have movements mapped to tracks – the alternative would’ve been extremely long tracks, or to have the entire CD be a single track representing the work.

The current behavior was designed so that in Roon, you no longer have to choose between behavior sensible for popular music (tracks) and sensible behavior for classical and other genres built around multi-part works.

If you want to play just a specific movement, you can do so from the album (like you would with a CD), but when you queue up a few of your favorite multi-part works, shuffling them is going to play the works in a random order, playing each work as a unit, as opposed to treating them like popular music and shuffling the underlying movements or tracks.

I would like the ability for classical movements etc to be treated as tracks so that random play plays one track from one album and then onto the next random track and album. It makes no sense to me, when wanting to listen randomly, that whole albums or symphonies, etc, are played.

I understand the logic behind it but is there not a way for us to choose whether classical albums are treated as ‘Works’ in the Roon world or just tracks?

It’s most irritating when non-classical albums get classed as Works such as Tommy.

At the moment Random is not really random for classical music.

I understand your intention Mike, but if we wanted to hear a work, we would select that album to play that work. But if we select random, we mean random tracks.

An explanation is in order to explain why I want (and possibly others) want this. One settles down to listen to music but are unsure exactly what fits the mood. Maybe it is something from Baroque and Early (a tag I’ve inserted) so random play for that is selected. Roon latches onto Handel’s Water Music. OK, this is fine but does not really suit the mood so I try to move to a different album. No, at present I cannot move away from this work unless I go though each track of the album and that is irritating.

So here is a different scenario with a true random selection of tracks: Random play is selected for the tag Baroque and Early. First track selected is not particularly appealing so I move onto the next. It selects a track from Handel’s Water Music which I find nice, so I want to hear more of that work. I can do this by then abandoning random play and can then listen to all of Handel’s Water Music.

This is what I got used to doing with random(shuffle) play on Sooloos and can do on my SONY MP3 players but cannot do with Roon and that bugs me. At times I’m just content to hear a continuous array of random tracks from a genre. Other times I’ll use it to discover forgotten music discovered in random play.

Bottom line I do not appreciate the current structure for random. If I wanted to hear works, Roon offers a number of ways of doing that. But if I want a random play of tracks that is what I’m looking for, NOT a random play of works.

Apologies if this sounds unappreciative of what is being designed in Roon. Generally what has been achieved so far is impressive. But the undue emphasis on preserving integrity with classical music works is not what I want.

I know not everything can be a switch. But it sounds like different users, or even the same user at different times, might want Classical to Shuffle by Composition/Track.

Good point. It would be interesting to see if many classical music buffs would like that.

As I said before I do not want it and would never choose to random select works. If a random selection of a track is appealing, I should be able to easily move away from random to listen to as much of the work as I wish.

But if others want it, then let there be an option so anyone can toggle for either random track or random composition. However if there is no support for random classical work selection, why not abandon it? Bottom line, PLEASE can we have the option to have random track play.

One of the features of random play that I enjoy very much is the way it selects randoms in certain folders.

For example I have a folder of several hundred songs of mixed artists which is a greatest hits folder for me.

I select random play to shuffle it up - but
When it comes across an artist and this artist has multiple titles it will play all of their songs together and then shuffle along to another random artist.

I really like this feature. I do not believe that the Playlist feature performs this way. I wish it would. 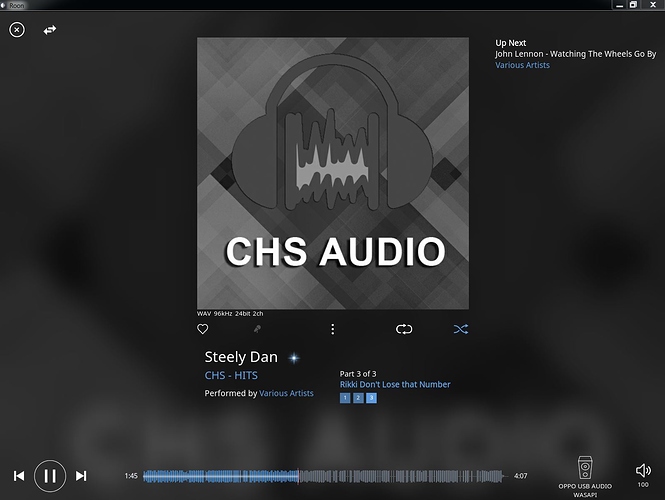