A most basic question- why can’t I see potential endpoints such as other computers, tablets, and phones within my LAN?

Here is what I see under Audio: 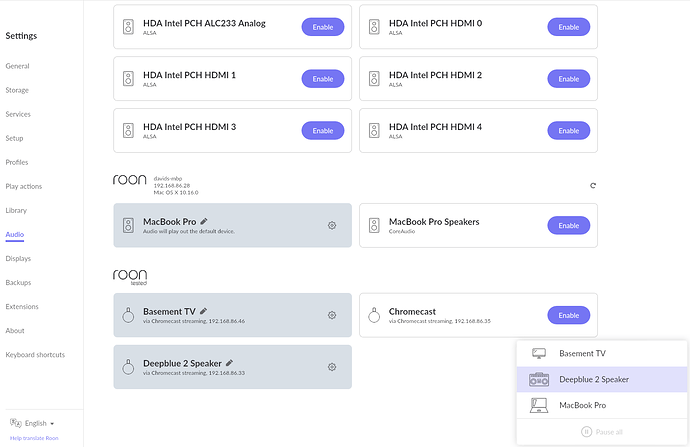 I thought that any device that has the Roon app on it would be discoverable as an Roon Ready endpoint. I once was able to play to the Windows computer I am sitting at now, but it (and others) are not visible for me to select.

Roon or Roon app needs to be running on the devices for them to show up.

If that did not help also make sure they are still on the same network.

They would still show up in Roon/settings/Audio even if they are set to private zone, though. He stated that they are not showing up at all.

Yes, you’re right, they do show up even if set to private zone.

The Windows machine I was on earlier (I’m now on the Mac) had Roon installed and running, and is on the same network. Strange that I can’t see the “Private Zone,” but as @bearFNF advised, may not be an issue in my case.

Now, I may have figured it out, and learned a bit more about Roon along the way (if I’m correct)-- I just launched Roon on an iPad. Once I enabled it on the Mac, which is the “System Output” device for my installation of Roon, I can now see the iPad on my Mac and select it as an endpoint on the iPad. So my understanding at the moment is the System Output device (my Mac) must enable all other endpoints so Roon can be played on those endpoints. Is that correct?

You should be able to enable audio zones from any device connected to the core (ROCK on NUC in your case).

On the windows machine you said you had ROON running, so when you look at Audio settings on that machine it IS the system device and its outputs show up under “This PC” (this is different for different devices, like my phone says “This Phone”) and would not show up under the other sections (ie other network devices, etc.). In your screen shot on the Windows machine if you scroll up to the top it “should” say “This PC”) like this: 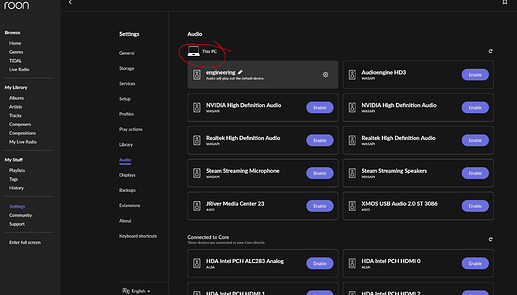 Hope that makes sense to you.

Well yes it does, but…

In my house, we have two Windows computers- my wife’s (Niki) and my son’s (Harris). Both are WiFi connected, in close proximity to the router, and both feed video, audio, and share an external monitor, keyboard, and mouse via a KVM switch.

Roon is visible on Niki’s computer: 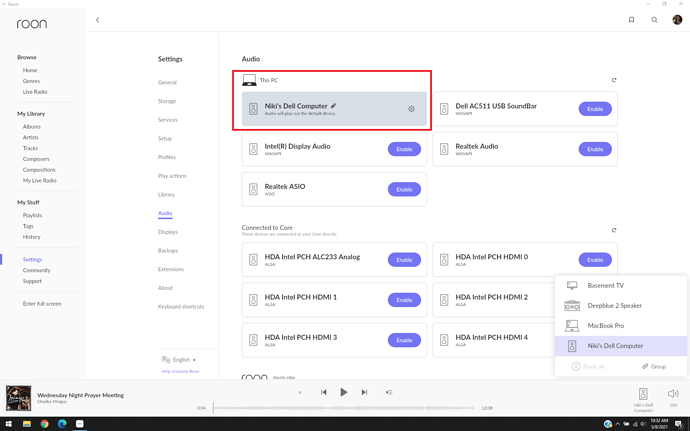 but not so with Harris’s computer: 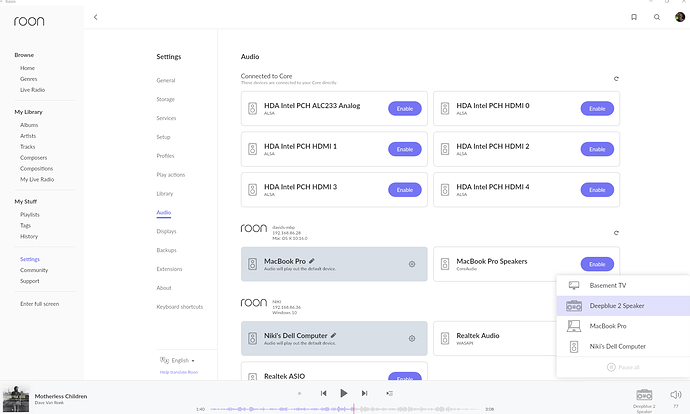 I removed all the external devices from Harris’s computer to see if that would have any impact (not that I expect that it would), but as expected it did not.

Just to be clear the second screen shot is taken on Harris’s machine running Roon? If you removed all external devices there should still be entries for the on-board audio assuming there is onboard audio on the motherboard that is enabled in the bios and in device manager.

Out of curiosity, if you look in device manager under “Audio inputs and outputs” and under “Sound, video and game controllers” do you see any issues? Are there any items in the device manager that have a “?” or a “!” indicating a driver or hardware issue? I was able to replicate your issue by disabling all audio devices in device manager. They came back as I re-enabled them.

It might be time to get @support involved to see what they say.

In my house, we have two Windows computers- my wife’s (Niki) and my son’s (Harris). Both are WiFi connected, in close proximity to the router, and both feed video, audio, and share an external monitor, keyboard, and mouse via a KVM switch. Roon is visible on Niki’s computer: but not so with Harris’s computer:

Regarding Harris’ computer, since they are using a Windows PC, I would verify that both Roon.exe and RAATServer.exe have been added as exceptions to your Windows firewall.

I played with it for a while, and then revisited Roon on the same machine a week or two later, and it worked! Not certain exactly what I changed, but I can now see Roon as an endpoint on both Windows computers, so I will leave it there. Thanks, and thanks to @bearFNF as well for the earlier assist.