Fix out of sync lyrics with : offset time per track instance

A proportion of my tracks do not sync well with the lyrics.
When they don’t it really doesn’t look very good and breaks the professional look of Roon…

A very simple remedy would be to include an offset for each track instance. Much like you can add a audio offset to video to adjust for lip sync issues.

One would need to be able to set it per track instance as different versions of tracks can having different lead in times etc.

(A fancy extension to this idea would also allows for a playback speed adjustment, to allows for incorrect speed of recordings. So if a recording was 3% too fast, setting the speed modifier for the lyrcis to 1.03 would mean they would remain in sync. I admit this would be a very rarely used feature compared to lyric offset…

Have you had support look at why you r lyrics are out of time. I can’t remember ever having that.

I experienced that yesterday with the latest 2 tracks of Roger Water’s Aused To Death album.

As I do not like ‘synchronized lyrics’ at all, I definitely prefer seeing the complete lyrics in 1 view , I have not really explored this in the past, but I am pretty sure I can come up with other examples.
Is this not a metadata problem, i.e. content of the synchronized’ lyrics tag?

I see this occasionally, often when the same lyrics are used with different recordings of the same song. However, I’m with Dirk and would prefer to see the entire static lyrics on Now Playing.

The real-time lyrics are best suited when casting to a TV.

I mustn’t use the feature enough

But the OP said large proportion of tracks. So might be something else than the odd mismatch going on.

I’ve must admit I haven’t explored it with too many different albums but I have seen it happen much more frequently than I would hope. (I’ll edit the orignal text)

Is there a way to only show the static lyric view and prevent the scrolling one? 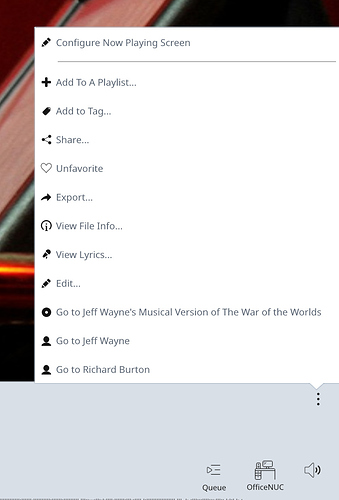