A few of my Mercury Living Presence Albums are split into two albums after ripping, how can I join them ? I’ve read the other threads with split albums but mine all happened during initial ripping and were ripped as FLAC’s on dbPowerAmp. These same albums are not split played with Lumin or mconnectHD/MinimServer.

And a few albums have the wrong cover art, again they are correct in the other players

After dBpoweramp has ripped them are all the album files in the correct artist/album folder?
Also can you check using dBpoweramp tag editor that all the tracks are tagged correctly:

Do you rip directly into the Roon watched folders?
I’ve found it is better to rip to a temporary location and once complete then move the files over to the Roon Watch folders. (So Roon sees all the tracks in one go.)

If not of the that works, then for a give album … select the split copies of it in Roon, right click and merge them together.

If Roon is displacing the wrong cover art (which comes from Roon metadata sources), then there is an option to edit the album fields and select use artwork from file.

Yes to the first two.

Not sure what a Roon watched folder is, I’m ripping directly to a Synology and not a temp location. What puzzles me is I’ve ripped direct for several years and have had Roon much of this time and never had these problems. I have recently installed a later build of dbPowerAmp on a new PC and the latest Roon build.

My set up is a microRendu/USB to DAC and Roon on a SonicTransporter so controlling with iPad, no mouse to right click, can it be done another way ?

How do I do the option to edit the album fields ?

Thks for the help.

[quote=“Rogerdn, post:3, topic:13723”]
Not sure what a Roon watched folder is
[/quote]The folders that Roon is Watching, see example image: 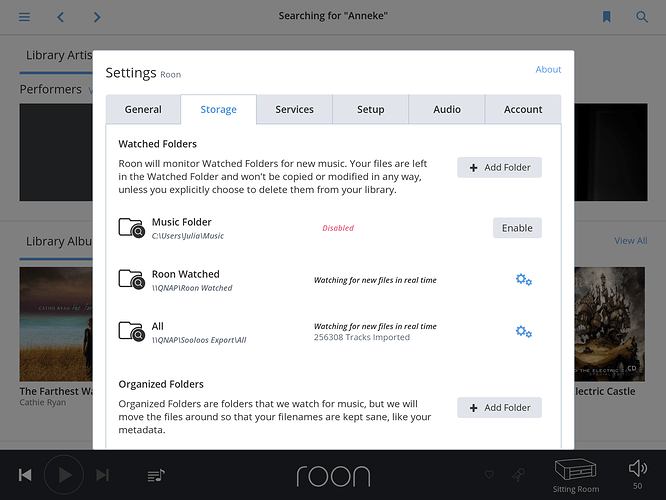 How do I do the option to edit the album fields ?

For the files: Use the tag editor that is supplied with dBpoweramp tag. Right click file(s) --> select IDtag editor. See dBpa’s user guide for details.

Got the split albums merged ok, only remaining issue is one album has wrong art, tracks are correct. The art is wrong only in Roon, Lumin/MinimServer is ok, so don’t understand how dbPoweramp tag editor will fix.

Edit, I rechecked and both are wrong so I’ll use dbPa, thks.

One other thing you wish to check is the albums individual music files on your storage drive. If a track was improperly duplicated (for example two track threes) it can throw the album identification off and split the album. Found this recently on one of my MOFI CDs. In this case, when I removed the duplicate track from my SSD, and forced a rescan of the affected drive, the album was fixed (and unsplit).