I purchased the Ella and Louis album years ago as a DSD download from, I think, Super HiRez (it is a wonderful version). In the last year, I have come to learn that four tracks are corrupted and (worse yet) my back up copies of those tracks are also corrupted.

In an attempt to make the album whole, I found FLAC copies in my library for two of the four tracks (They Can’t Take That Away from Me and The Nearness of You in red) and incomplete DSD copies for the other two (Cheek to Cheek and April In Paris) as I don’t have those elsewhere in my library. How I could not have another copy of April in Paris… that’s a different topic. 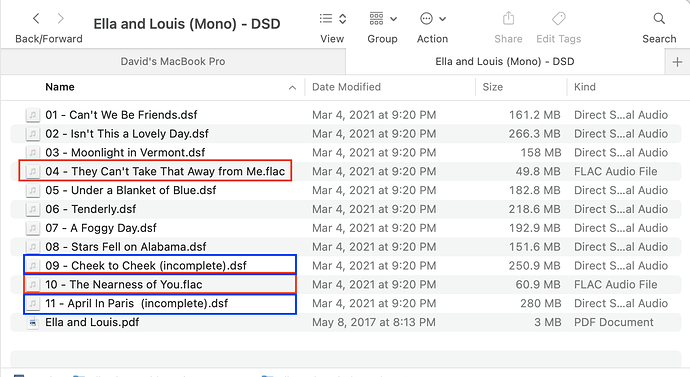 My technical question is that the FLAC copies in red do not appear in the track listing in Roon below. That seems strange to me as Roon should not different the tracks based on the codec. 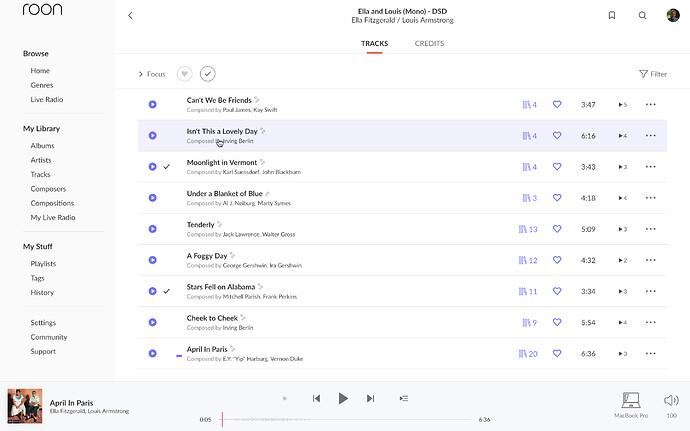 Any thoughts on how I can get the two FLAC tracks listed under the album? Even more important (but not technical in nature)- anyone know where I can get another DSD copy of the album?

Thanks for the referral. I saw that earlier and have written to AS. The DSD copy is listed as not available.

You are right I missed that, my apologies. I forgot they had stopped their download service. I have only been able to find a 24bit 96kHz copy. Did you try playing the corrupt files in another player by chance to see if they played the whole songs with no issues? If you still have the files, there are a few things you can try to fix them from being labeled as corrupt by Roon. Do you have a good file format converter like dbpoweramp or XLD for Mac? I recently has about 10 corrupt albums and on the advice of other members, I just ran them through dbpoweramp and converted the file to the exact same file type, bit depth and sample rate. It fixed the errors in the file headers and they all work perfectly now. You could also send me those files and I can try a few things with them if you want. I have a couple of additional repair tools I can try as well.

I’m pleased to report that Acoustic Sounds graciously offered to let me download Ella and Louis again (a service they said won’t be around much longer). So, my corrupt version has been replaced, and my music library is now fully backed up.

Thanks to all for the suggestions and support.