FLACs with more than 2 channels

As per normal, I may have missed the obvious, and I have read various other questions that are similar, but here goes.

I have FLAC files with more than two channel info, but Roon seems to like reducing it down to 2 channels because the DAC will only handle stereo.

AirPlay seems to do the same, as does Logitech’s Transporter. If I (with difficulty) get the amp to play the tracks by browsing for them in the amps software then they work fine. 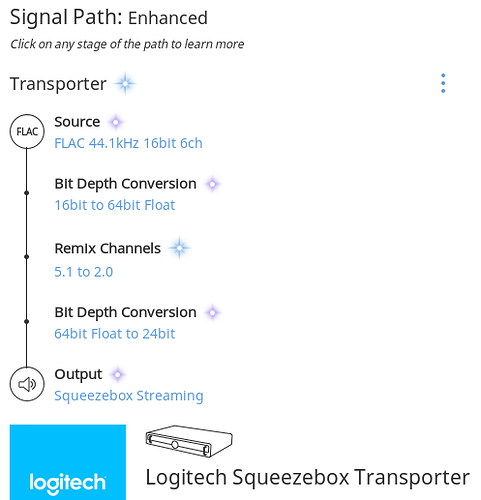 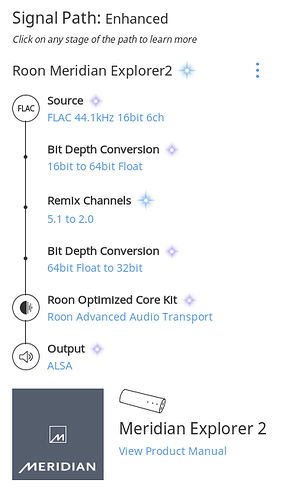 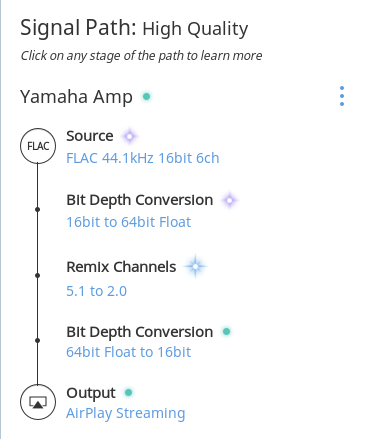 Now if Roon could see the Yamaha amp as an end point… wishlist request to both to Roon and Yamaha.

Thanks in advance - Terry

You’ll need to connect Roon core to your Yamaha via a conduit that supports 5.1 files - none of the devices you’ve shown above support higher than stereo.

For example, you could directly connect your Roon core to the Yamaha via HDMI if both devices support it. Or you could purchase a DAC that supports 5.1.

But as long as your path contains a device that only supports stereo, you’ll never get 5.1 at the other end - the stereo device is the bottleneck.

You must use a connection method that supports multichannel. For the Yamaha AVR, your only option is HDMI.

I had overlooked running hdmi from my “home made” Nucleus to an HDMI port John. I understood why it was being remixed to 2 channel because that is what the devices supported but had totally missed the blindingly obvious hdmi… doh.

Thanks Andrew, I did prefix my initial post with “missed the obvious” and I claim immunity on that basis alone.

And it sounds good on both.On the lower path, the RX-A3060 then handles the 6 channel output without the left/right fronts losing quality. Or so it seems… n.b. the image needs expanding to see the second path.

However, I am not hearing the Yamaha amp decoding the multiple channels, it appears to be playing in stereo only. I do hear a click as the amp recognises something change in the format between tracks, but nothing at the speakers.

The output is as good as I am getting from the Meridian Explorer2 into the amp in PURE DIRECT mode.