Foiled by Schmieder and Koechel

I ripped a CD of “Two String Quartets” by Mozart, performed by the Smetana Quartet. These are Kv 421 and 458, two of the famous quartets dedicated to Haydn. Under “Composers -> Compositions” the only place this album shows up is as a concert aria for bass and orchestra Kv 432 (421a), a single track, which turns out to be the andante from Kv 421. The only thing I can figure is the alternative Kv number as the source of the confusion. As an experiment I also ripped a set by the Alban Berg Quartet “Mozart Late String Quartets” that includes these two works and they all got identified fine. Only one “performance” is shown for all, though. When I select “prefer file data” Roon tells me “Roon data is being used because the file does not contain this data”. The “track” tag is just a number, the file name is “Quartet in D Minor, KV421: Andante” The concert aria sounds interesting and I’d like to hear it some time but for now I’d like to get the quartet properly identified. Do I need to paste titles into the track tag fields?

Also on the subject of classical metadata, I began ripping the complete organ works of J.S. Bach performed by Wolfgan Rubsam with disk 8 which contains the 46 chorale preludes of the “Orgelbuechlein”, to see if metadata was available (years ago when I began doing this for Squeezebox Server I was faced with the prospect of manually typing in 46 German chorale titles). The metadata was there but now my “compositions” by J.S. Bach are dominated by these since each one is listed as a separate “composition”. This is understandable since each one has a separate B.W.V listing. The “Well-Tempered Clavier”, books I and II, on the other hand, are properly grouped as compositions even though each prelude and fugue of those compositions also has a separate B.W.V. listing. How would I go about grouping the OrgelBuechlein as one composition (not an album, necessarily).

I have all the Smetana Mozart discs, and don’t recall this problem occurring in my library.

Which disc exactly is it (there are several with identical programmes, recorded in different years). Can you give the catalogue number and/or upload the cover? A screen shot of the offending album details screen would also help. Then I can check my end.

You can’t currently regroup compositions in Roon. Your Bach problem touches on an important issue which comes up often amongst classical collectors: nesting works.

Roon needs to display and interconnect usefully albums where Well-Tempered Clavier is identified as a single work, and where it is identified as a bunch of individual works by BWV number. Whether this can be done automatically I am dubious about, but perhaps the geniuses on the Roon team can make this happen.

There probably aren’t so many works involved. Probably 100 major ones. Perhaps a case for some manual curating work from the Roon team? 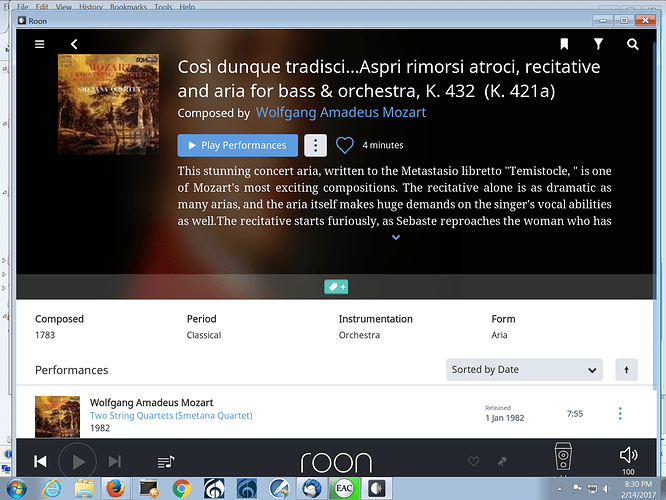 I don’t have the actual aria in my library. Do you?