When I complete add metadata in a test case using a tagger, I then go into Roon and go to Settings => Storage => three dots => Force rescan. Roon then scans my entire watched folder which takes a few minutes. Afterwards, I can see if my edits are properly read by Roon or if I have to make further changes (which is typically the case…)

Is there a way to have Roon scan the targeted folder(s) without scanning all of my watched folders?

How is your folder structure for your watched folder? Are the target folders individual albums?

The target folder (at the moment) is part of my watched folders. My watched folders are stored on my NAS under “Music” and the subdirectories are artist (Bob Dylan), collection (The Bootleg Series), and album (The Bootleg Series, Vols. 1-3 - Rare & Unreleased (1961-1991)). In most cases, I am editing the metadata in an individual album. Note too, that I don’t often use the collection level, but Bob Dylan (and a few others) warrant it to better organize my albums.

You can re-scan an album by going to the album editor panel that you open with the 3-dot menu next to the big play button on the album page. You have to scroll down just a little bit to expose the “Rescan album” option 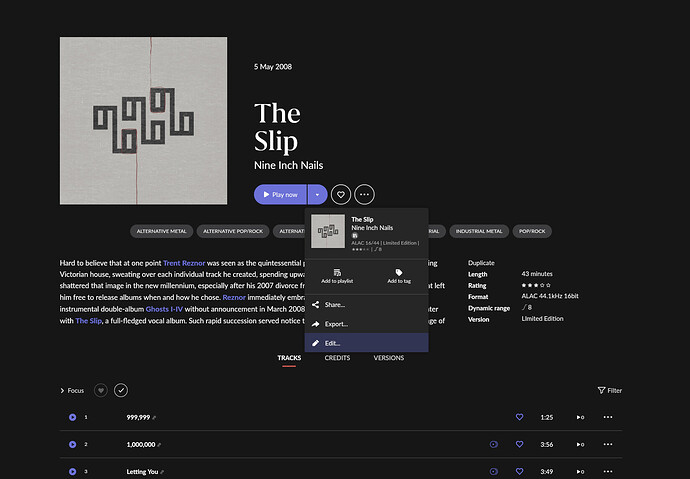 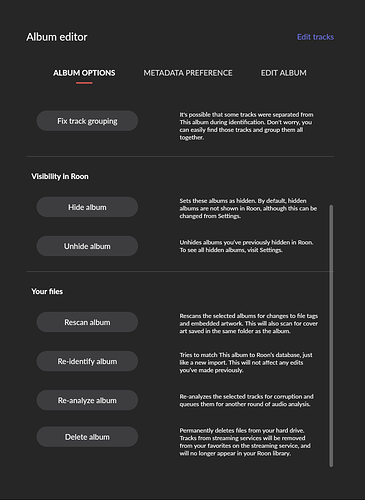 For collections, you can select the multiple albums of the collection by right clicking each of them, and then going to the three dot menu that appears at the top of the screen and selecting edit. it will bring you to the same album editor screen but it will rescan multiple albums

The "Rescan album” option is exactly what I was seeking. Thanks for pointing that out.

Now, to be honest, the amount of time scanning the whole library isn’t that long, but watching it scroll by… certainly there are better things to do.

Great! I am glad that was what you were looking for. There are certainly better things to do than watch Roon rescan everything