When I add a Qobuz album I am getting a lot of artists with a forward slash, “/” delimiter. Of course it is easily fixed manually but I am seeing it quite a bit so could it be caught by roon beforehand? 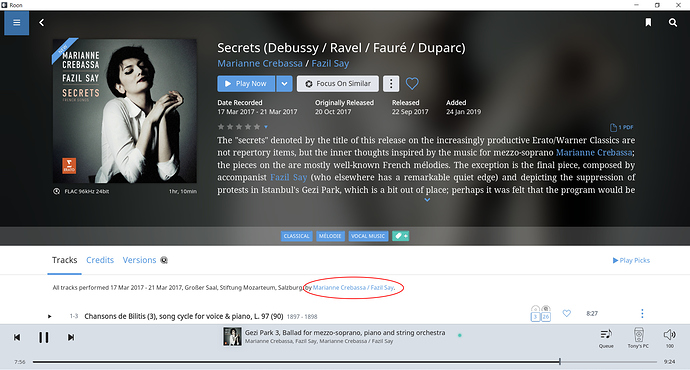 Definately not just related to Quboz.
If you try to replace the given ‘album artist’ may I ask about how many equally named artist you’re offered in the list of artists named “Marianne Crebassa / Fazil Say” ?
I would bet at least 2 entries.
Means your album is linked against one of them while the tracks are simply linked against the other.
And this issue is part of the issue where poeple moan about roon loose albums, they aren’t lost they are simply linked upon the wrong artist. And no fixing this is working against windmills since roon reverts the corrections within days.

This looks to me like a metadata issue, with the wrong entry for Album Artist: 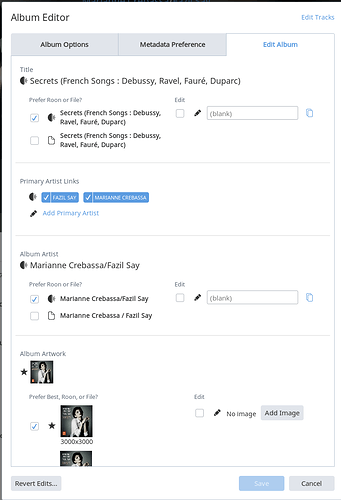 I can’t remember what TIDAL had for this album; I’ve now stopped TIDAL.

I think this should be moved to the metadata issues category, agreed?

whoa. Album artist wrong? That’s how I have every Album Artist formatted. Roon will treat it as two separate artists

Now that’s the one that is perpetually created by Roon and is not quite right IMO.

Yes, I see this a lot, not just with Qobuz. Comma delimiters, and many others as well. I always replace them with a semi-colon “;”. But I am only recently a streaming (Qobuz) subscriber, so this is the first time I am seeing the problem in this particular context. Roon also is only a recent partner with Qobuz so maybe there is scope for some kind of pre-processing on ingestion.

I don’t really understand your question though. With these Qobuz issues I haven’t personally found myself “replacing” anything. I just delete the concatenated artist string “Marianne Crebassa / Fazil Say” in the album editor. In this example, there are also individual album and primary artist entries of Marianne Crebassa" and “Fazil Say” separately. So the concatenated artists are kind of duplcates in a way.

Whenever I have come across these concatenated artists in the past after uploading to roon I also have just deleted them and filled in any gaps in my tags of the single artist names if necessary. I have not found roon has reverted any of these edits but I do all the editing external to roon with a 3rd party tagger directly in my files. Maybe the experience is different if editing within roon.l I don’t know.

Yes. Exactly. And just so everyone is on the same page I delete it from this screen (the concatenation is gone because I have already deleted it): 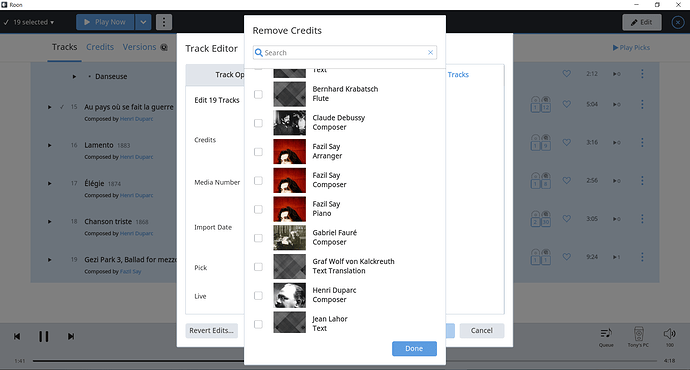 My question is not what I need to do. I know what to do. I estimate that I may have done it +/- 10,000 times in the last year whilst importing a local library. My question is can’t roon do it for me so I never see the problem in the first place? This is just an example I am getting it on a regular basis adding Classical albums from Qobuz.

Yes. With you on that. That’s what I do as well. I don’t want any changes on the screen Geoff posted. I simply delete the concatenation (munge?) from the credits. I simply don’t want to do it virtually every time I add a Qobuz album to my library.

I estimate that I may have done it +/- 10,000 times in the last year whilst importing a local library.

That’s what I ment earier. You can adjust things manually. But I already came across edits which got reverted some weeks later which made me stop editing these.
And I’m not aware about an automatism roon offers.

Yes. I understand. But my use case must differ in some way. I do not see my edits being reverted.

Perhaps Edits reverted was the wrong explanation. This happened to me mostly with albums having been unidentified by roon since some date. And when they got identified since roon did expand it’s knowledge/coverage, these then got split from the edits.
eg. If I have an artist with 4 albums all unknown to roon and having finetuned these, if roon steps in with the knowledge about 2 of these albums I had 2 artists with 2 albums each.

What I don’t get here, if I define an album artist for the complete album, roon should auto-care about the tracks of that album do belong to that album artist, and not one identically named. And this doesn’t happen … the credits remain static which causes such issues.

Ok. I understand your frustration.

Because I edit almost every album whether identified or unidentified I never see roon surprising me with unexpected changes to my library. But every now and then I go back to my unidentified albums to see if I can identify them or roon has found better meta-data than me. In those cases I do see what you describe. Identical artist names being treated as different artists. In those cases I make a copy of the albums somewhere roon isn’t looking, delete them from the roon library, clean up library, and re-import. I don’t loose any of my edits because I always edit the files directly. In those cases I usually end up with more (i.e. better) metadata in addition to my own.

Metadata sounds fine to me. I think it is a general problem for those adding Qobuz Classical albums to their library. I was surprised to see a forward slash. Mostly in the past it was a comma.

The team has looked into this and we believe there may be an issue here with how the album artists is being parsed in that section in the absence of track level artists. I’ve passed this along to our technical team for further investigation and will update you once I’ve received further feedback. Please accept our apologies for the trouble here and know that we appreciate the report!

We’ve made a change here in Roon 1.6 (Build 416) that we believe should resolve this issue that you’re seeing. You can read the full release notes here:

Strange. I don’t experience that.

I meant that I have made thousands of edits, each one time only. I have never had to repeat an edit or experienced roon changing my edits.