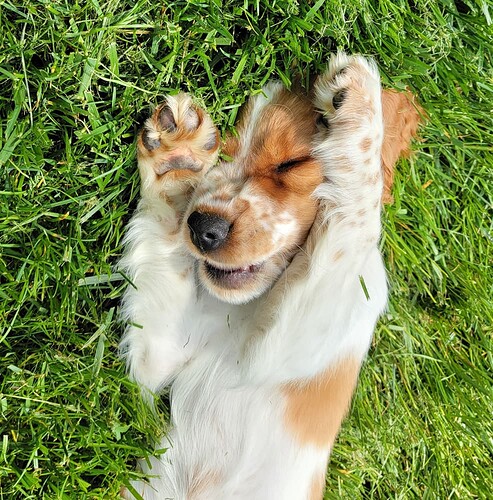 This is Summer playing in the grass. Nine weeks old here. 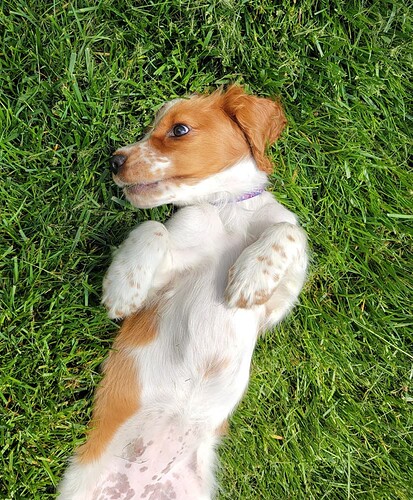 “Haircut day just wears me out.” 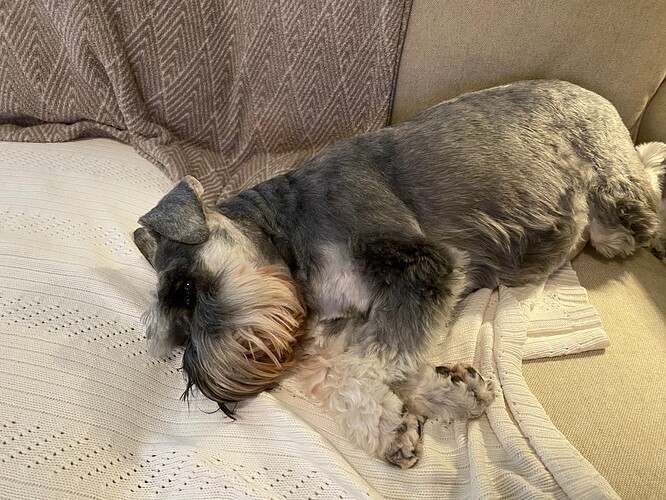 Lucy is unquestionably the best of the best.

The beginning of the siesta. 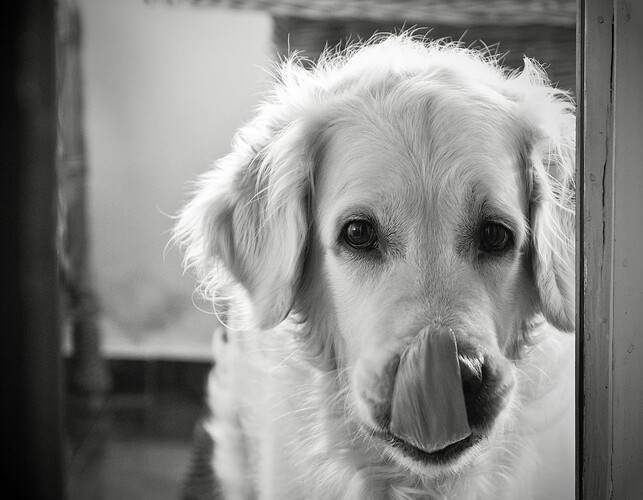 Despite wanting to breed from him as he’s a (subjective bias mode on) gorgeous boy with a great temperament and awesome personality, Stan’s somewhat hormone driven behaviours (constant sniffing, sketchy recall, getting into scraps by ignoring blatant social cues in the presence of girly-dogs) led us to trying a hormone implant. Within a few weeks, the results were dramatic. He was much more focused out on walks, more engaged in play with other dogs, much less sniffy and generally a lot more laid back. This led us down the route of a more permanent fix. On Friday, I dropped him off at the vet’s for the procedure. At the usual disclaimer statement around risk and general anaesthesia, my lip started to quiver. Puffy eyes for the rest of the day were of course blamed on hayfever. I never realised it was possible to love a dog so much that even the slightest suggestion of things going awry could reduce a grown man to tears…,

All went well, though as an incessant licker, a buster collar was prescribed post op: 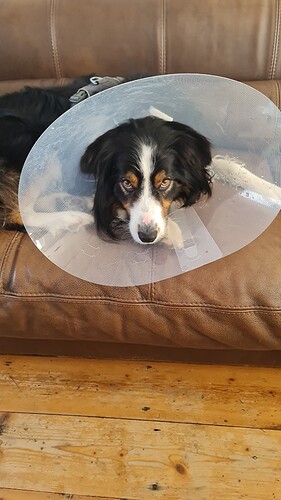 “Losing the twins I can forgive, but making me wear this contraption is on a whole nother level!”

He seems to have made a full recovery. No ill feelings and he’s back to his usual soppy, cuddly, attention-seeking self.

Contemplate for a second, by looking the guy’s eyes, you think you are forgiven? Yeah right!

@Jason
there she is… 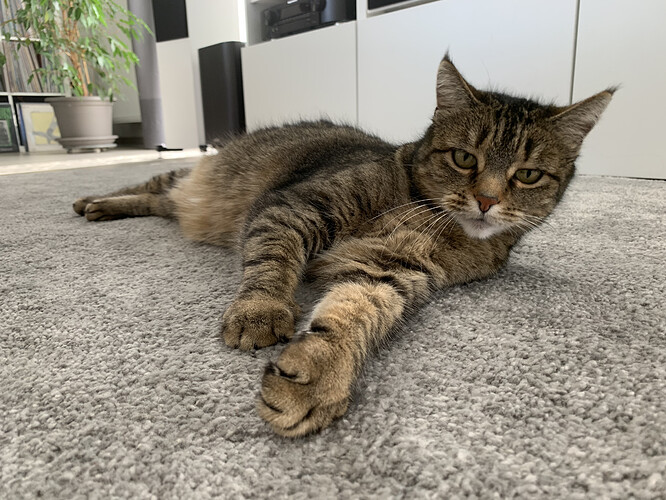 Her name is Maya

The latest rescue is growing. 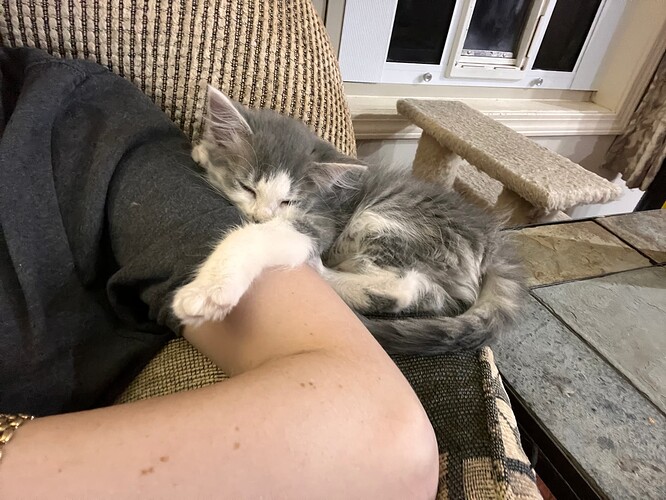 From the size of her paw, it would seem there may still be some significant growing to be done.

I believe it is a boy. I have seen him only in photos, and he is very active…very and his greatest joy appears to be pouncing upon the other rescues. His paws have large implications.

There is an article about cat poses and behaviors. Madge’s presentation supposedly implies trust.

Yes I believe it does. The last cat we had was 25-30 years ago, and as a kitten climbed up my clothing when I came home from work and sat that way across my shoulders… he grew to 9kg at 12 months old even after being de-sexed. Still sat across my shoulders!

I was on a walk, found a tiny kitten, brought it home for my eldest child. She adored her. She remained very small. She would take flying leaps across the room and destroy our Apogee speakers. I then sent a ransom note made of letters cut from a newspaper and threatened harm to the cat unless receiving a stack of unmarked bills beneath a park bench. This became a “thing” of anonymous threats against the cat. She was with us for almost 20 years.

We got rescue litter mates at 6 weeks old and they recently turned 7 years old recently. 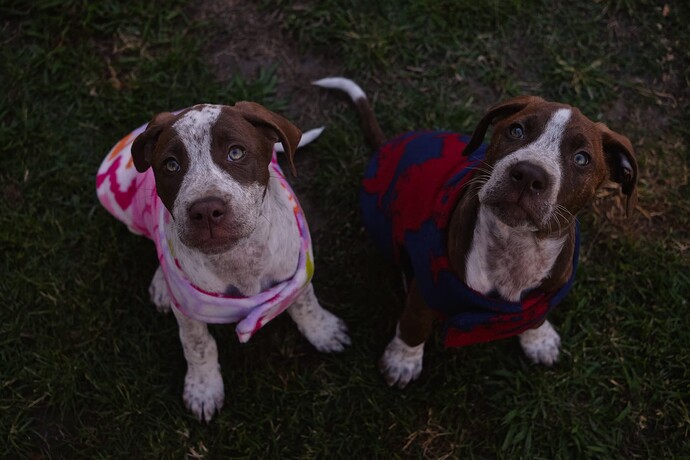 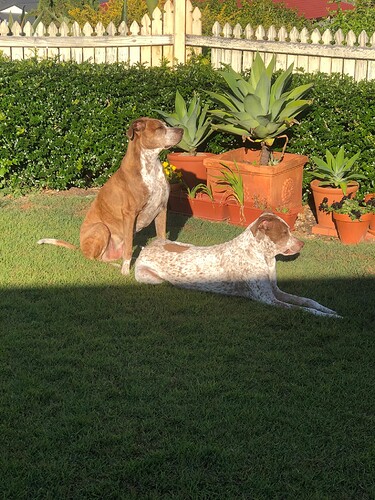