I am struggling with the album illustrated here. I have renamed the files, checked the tags till I am blue in the face, the file names are identically formed.

And yet Roon INSISTS on separating track8 into a separate album. I have recanned both the album and the file.

I would add a screenshot of the Roon interface, but this site breaks when I try to add it :-((( 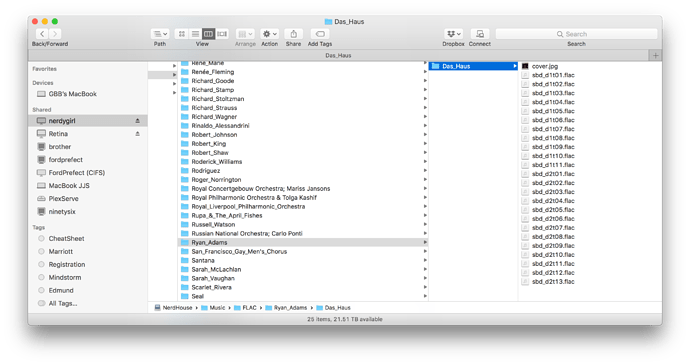 I’ve had a few of these. The Roon data base is ‘reluctant’ to release information so the only way I’ve found that works is this: move the folder (album) away from the Roon watched folder, then perform a library clean up Settings->Library->Clean Up Library. It should state something like ‘Clean up x deleted files’ corresponding to the number of files in the folder you just moved.
After clean up move the folder back and let Roon discover. Most likely the album is now correctly displayed.

Yes, I have had similar issues and this technique works for me too.

Did you try using the Merge Album feature?

Thanks folks, I’ll give it a whirl…

@Rugby, I have scratched my head over it. It appears to operate on either a) the isolated track, or b) the rest of the album.

I cannot see how to force it to look at the track I want to include as part of a set.

Select both albums and then click the Edit button. On the next screen the first option will be to Merge Albums. Choosing this will bring up a merge album screen allowing you to arrange track, etc and then save everything as a new compilation.

Thanks all! @ogs trick was the winner. @Rugby, it took me a while to realize that the Mac CTRl_CLICK bug is global and I couldn’t select multiple folders. Even when I did, the errant files would not behave.