Frustration with Tagging in Roon

Please see the attached image of a list of songs. This is an album I have just finished mixing of my own songs. Originally I imported them into iTunes as AIFF files, added metadata such as Song title, Album Title, Composer etc etc…

After the problem I have been having, I have now imported them all as ALAC on the assumption that metadata in AIFF was not good enough. But alas, same problem…

Some songs show composer, some do not. At various times I have had different results, but ultimately it seems hit and miss for content that I create and add to Roon. Frustratingly there appears to be no way for me to edit this data in Roon itself, so instead I have tried several metadata editors, all of whom show me that the data is there already.

SO, PLEASE ADD A FLAG FOR FILES TO SAY THAT IT IS TO BE EDITED ENTIRELY WITHIN ROON RATHER THAN RELYING ON DATABASE LOOKUPS ETC. AND ALLOW ME TO ADD THE CONTENT NEEDED.

OR, ADVISE WHAT THE HELL IT IS I AM DOING WRONG TO GET THESE HIT AND MISS RESULTS. 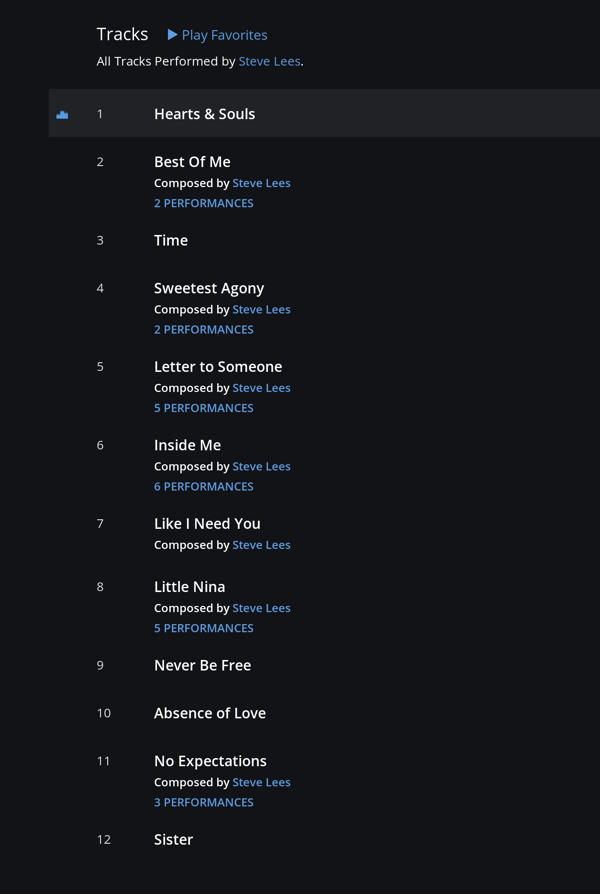 OK things just got a little weirder…as I added metadata to OTHER tracks on different albums (although still written by me), all of the metadata in the attached list suddenly appeared! Confused…

Steve
Roon is not elegant at editing metadata nor at letting you use your own metadata. Roon is still grounded in the assumption that the sophistication of their automated metadata management is paramount. Some of us argue that we still prefer our own.
Roon’s solution to those of us who stubbornly persist in want to control more of our metadata lies in two places.
First, in the general menu (top left hamburger) you will see a Settings option. Among these settings you can have Roon use your Genre tags rather than theirs.
Second, when you are in album view or you have selected many albums (by artist or genre, for example) you can select all those albums then in the upper-right quadrant you will see a pencil symbol. Now you can chose what metadata Roon will manage and what metadata you want it to take from your tags.
While the Genre choice is universal, the metadata selection is specific to the selected albums/artists/tracks.
I hope that this helps you get your music to something resembling how you see it.

HI Peter, thanks for the info, but it is not Genre that I am having trouble with, it is everything else such as composer etc. I think the simple solution is to have a flag on an album that allows you to select LOCAL ( as in local database) for metataging a particular album.

I get that the power of Roon and the reason we bought it is because of their database of metadata and the incredible wealth of information the system provides on known commercial artists, but I am also quit sure that there are many people like me, who have added content to Roon from either their own bands unreleased music, bootleg recordings, and other content that will never be on the Roon databases. For these items, there has to be a way to add the data.

Steve, did you try the second place you can control tag data from Roon or your files?

I think you missed the second half of Peter’s comment. Highlight an album in album view, right click to get an edit button, There you can tell Roon which meta data to use, your own or its. This can be done album by album or ctrl a (windows) for all or by just selecting a subset with right clicks.

Yes sorry did all that, it makes absolutely no difference sadly…

Well, if you say that you are telling Roon to use only your metadata and it is still not picking it up then perhaps @brian can give some insight.

You can completely disable Roon’s metadata database’s influence over an album by doing:

The “Prefer Local Metadata” features mentioned above are a softer measure that guides how metadata from our databases are merged with data from your tags.

I encourage you not to think of Roon as an editing/grooming platform. We may grow into that over time, but are not there yet, and there is plenty of good software for tag editing. With clean file tags, you can get a fairly rich result, particularly using FLAC, which has the most powerful tagging structure of the formats we support.

Brian, thanks for the input, I will give that a go and see what results.

Brian, I totally removed the song files, re-riped the songs into FLAC format, used a tag editor to add all metadata and added the tracks to Roon. Please look at the resulting information, most of it is right, however on the composer parts in blue, some have a comma between composers, others have an ampersand. What is it that causes this information to display differently?

It is not (in general) safe for us to split on commas or ampersands, since some legitimate artist names contain those strings (think bands, not people). You are seeing differences because Roon is treating the tags literally, as they appear in the file, and the files themselves present an inconsistency.

The best way to represent multiple composers or performers in file tags is to use a format that supports multiple instances of each tag, and then separate them into multiple tags. For instance, a FLAC file could have two COMPOSER tags–one for “Steve Lees” and one for “Andre Javes”. Roon would render these as separate links and treat them as separate people.

Roon recognizes ‘;’ as a delimiter within fields that represent artist/composer/etc names–this is a compromise to deal with file formats that don’t support multiple instances of a tag, and not what we generally recommend, though it will work.

Brian, take a look at Adele’s album, every composer IS in fact treated separately with commas in-between the composers names. Your explanation also does not explain why it treats some with a comma and others with an ampersand as all files are written the exact same way? Anyway will now try using the ; as the delimiter… 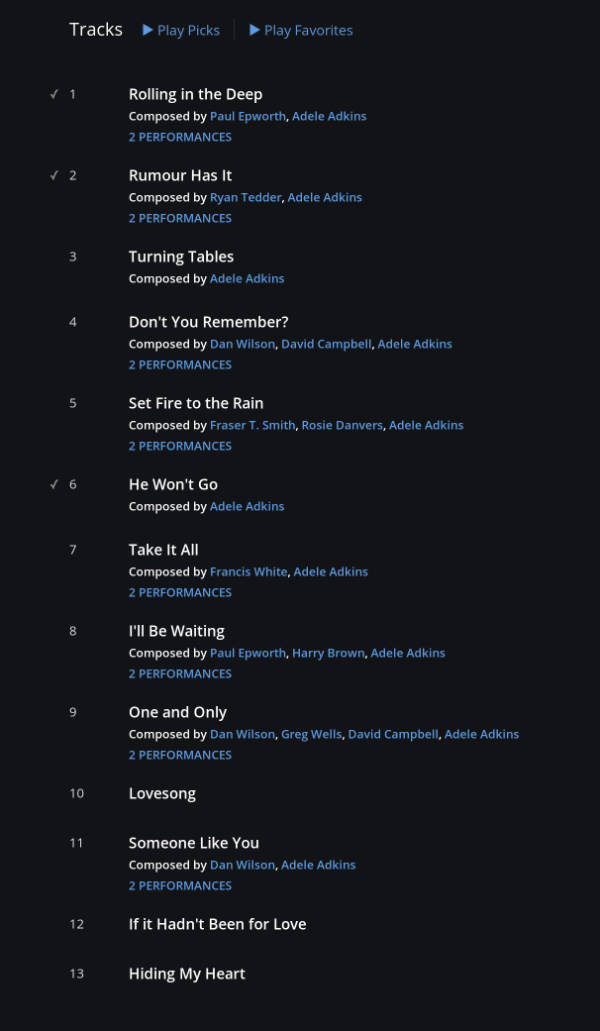 If you are able to advise me on a decent metadata editor for Mac that would be great because nothing I have tried offers multiple fields for composers etc.

The ; works in separating the composers correctly, thank you.

Brian, I have found a metadata editor that allows me to add the musicians data, such as:

However the only thing that Roon will show is the vocals! Stumped again…

Brian, see attached a screen shot of a song file opened in an application called MediaInfo, it shows that all musicians are listed, but Roon will only show the data for VOCALS. If I make all other musicians VOCALS, they all show up, but not if they are listed for Drums, Bass, Guitar etc…??? 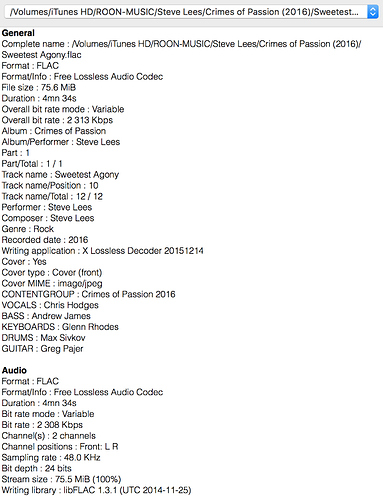 Your explanation also does not explain why it treats some with a comma and others with an ampersand as all files are written the exact same way?

Roon never adds an ampersand that wasn’t present in source data (either in the files, or from a 3rd party metadata source). We would need to look at the files to say more precisely what is going on.

However the only thing that Roon will show is the vocals! Stumped again…

There is no well-agreed-upon way to support arbitrary track credits in file tags–believe me, if a widely supported (and more importantly–consistently respected) standard were out there, we would work with it.

We support tags that are commonly present in real-world collections, that are used consistently without false positives in the real world (based on analyzing data from a few million files), and that are documented clearly in respected venues like this page.

VOCALS meets that standard. BASS and DRUMS do not.

It is not safe for us to take all file tags that we don’t otherwise recognize and treat them as track credits–people can put whatever they want in file tags, and it would make a complete mess of the experience.

File tags will never provide as rich an experience as our metadata model. It’s not only impossible (file tags have very limited expressive power and are a minefield due to inconsistent tagging practices in the real world), it’s not our objective to attack the problem by fixing how people manage their files or how the file formats work.

Eventually, we’ll allow everything to be edited in-app within the terms of our model. In the mean time, it doesn’t hurt to make clean file tags. Until we make our editing support comprehensive, there will always be differences in fidelity between what you can accomplish with file tags and what we can accomplish when our services deliver the data.

Hi Brian, thanks again for your reply. Where you say VOCALS meets the standard and DRUMS and BASS do not, how do you get to that? The page you link to does not even list VOCALS let alone bass or drums so I am a little confused, how should the bass player and drummer be listed?

I believe he’s saying they cannot presently be presented in your tags in a manner that Roon will pick them up, but that once enhanced metadata editing is made available within Roon you’ll be able to do it there.

Evan I am not sur ether is what he is saying entirely, yes they do intend to allow us to edit the metadata, which is great, but…

“We support tags that are commonly present in real-world collections, that are used consistently without false positives in the real world and that are documented clearly in respected venues like this LINK TO PAGE. VOCALS meets that standard. BASS and DRUMS do not.”

Well the linked page does not reference VOCALS being accepted, and yet ROON does grab that data and show it, so if it is simply ROON being able to ‘recognise’ the VOCALS data, why on earth would BASS, GUITAR, DRUMS, KEYBOARDS etc not be a recognisable metatag as well?