I recently came across a few used Intel Nucs, and given the lack of availability of suitable new hardware for ROCK - I thought it was worth testing / upgrading these in case they are useful for people here.

As you probably know Roon have done a great job of putting together Rock as an effortless way to run Roon.

The Nucs I found are a couple of different generations of Intel i5 CPUs - and I’ve initially focussed on getting the two highest spec machines working.

The two I can currently offer are both 8th Generation i5s. The 8th generation are generally thought to have the best performance for roon (later generations have more cores, but less compute power per core). These 8th generations i5s have 4 cores - and are actually a little more powerful than the 4 core i7 in the nucleus plus. So they would be a very good choice even for someone with a large library - or wanting to do a lot of upsampling. 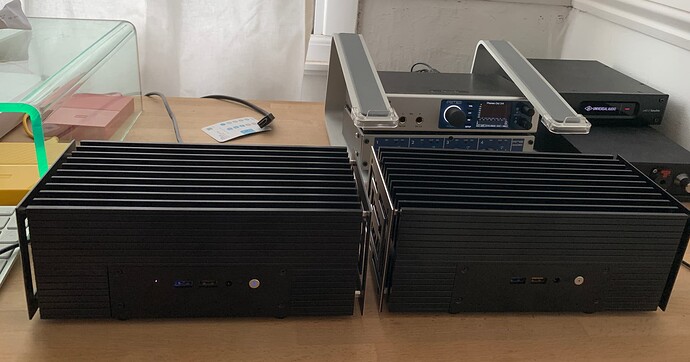 NUC 2 (on the right) is also a 8i5BEK now in a Akasa fanless case. It has 8G of new memory on two DIMM cards (the memory in the machine previously was lower spec - so I’ve installed new). This one has a 256G NVMe SSD. This is in line with the Roon recommended spec.

I have installed Rock and I’ve finished testing NUC1. I will finish testing NUC2 in the next couple of days. Both run well - and are very fast running roon (and are pretty much idle except when doing the initial media scan). Being fanless with SSDs they are completely silent. There is space in the case for an extra SSD for media storage, so if you’d like a Samsung 870 QVO SSD for media storage I’m happy to include for my purchase cost.

Both are priced at £550 plus postage (around £20 - the Akasa case is heavy) and the cost of an extra SSD if you want one. I’m not open to offers for these at the moment.

(BTW If you’re looking for a lower spec machine - my next projects are an 7i5 and 6i5 - just looking at suitable cases etc before testing - please get in touch if you’re interested).

The 6i5 is now tested and ready, details here:-

Following on from the two high spec 8i5s from my recent haul of Intel NUCs, this is the lowest spec - and least expensive. It is one of Roon’s supported models. It’s a 6th generation dual core i5 which means it has a touch more processing power than the current 7i3 Nucleus, which means it makes a great Roon Core unless you want to do a lot of upsampling or have a large library. That said when I tested it - it up sampled to DSD 256 reliably at 1.3x. [image] [image] [image] This is in the I…

I switched some memory around - so NUC1 now has 2x8G memory, rather than 1x16G memory.

In my testing having the recommended two DIMM cards (and hence using the dual memory channels) did make a difference when scanning - and probably upsampling - so this is now optimised.

So this is now a great NUC if you have 100k + tracks. It is also now optimised for upsampling etc.

I thought that I would mention that I have dealt with Greg on a prior occasion and he was superb to deal with, so if you are interested in one of his offerings then do not hesitate!

New to all this but looking at trying roon. I have a melco that has all my stored music on and this then is plugged in my my dcs dac.
Looking for a plug and play unit that i will place under the stairs and plug into my ethernet switch, so it doesn’t need to be fan less but would prefer it.
I take it this would work ok? Am i also right to think that if i want room correction i would need the nucleus plus?
But very interested in what you have listed here and any advice would be welcome
Cheers dunc

What DCS are you using? I’d guess it’s connected to the Melco via USB?

This is certainly a plug and play way to run roon. It’s basically a Nucleus plus in all but name. It runs the same software, has a bit more cpu, and will do everything the Nucleus plus will do.

I’ve not tried room correction - the ability to do the DSP is built in. But the room measurement is done via some third party software. I’ve not tried this myself. It does sound a little complex. I do run some simple room correcting EQ on a couple of non critical zones myself, but I just set these up roughly by listening. They use very little cpu - and improve the sound in my bathroom and shower!

Do you know what format your music is stored on the melco? If it’s a roon supported format then transferring shouldn’t be too hard. You copy music to ROCK via a network share.

I can install a suitable size drive if you let me know what you need.

The final piece is connecting to the DCS. If it has an Ethernet connection then you may be able to use that and put the ROCK elsewhere. If it’s usb then the easiest way is to connect directly to the ROCK, in which case you’ll need them next to each other (and then the fanless case is a big advantage).

I have a rossini and the melco is connected to that by ethernet. I wasn’t planning on transferring all my music over, but I guess i could do that in the future as then i could sell my melco N10?
For me right now i want to explore roon but at the same time have the options open in case i want them.
I have other gear connected to the network that i would like roon to work on like, naim muso, a few alexa’s round the house and i guess they will all work ok with it.
I just want it simple, plug and play. Running the right software.
Take it will be the new 2 software.
I like the fanless case as it gives me options on where i place it.
I like the option of running an inbox drive soi could ifi want sell my melco.
Being able to do room correction if and when is great.
So i guess what you have suits me

Have sent you a PM.

I am currently using Roon in a NUC i5 5th gen and I was looking for a fanless solution and the price seems reasonable however I live in Germany and there are major delays in customs after Brexit (+pandemic) not to mention significant taxes. I know well because I used to live in UK before and regularly ordered stuff from UK before & after Brexit to Germany. Are they still available?

They are still available, although I’m holding one for an interested customer.

I had a buyer in the US and it turned out that shipping a computer in a fanless case (without all the factory EMR certifications) was impossible.

I’m sure there would be EU taxes payable.

If there’s any kind of regulation against shipping a computer without certifications like in the US, I am sure German customs will utilize that but I would doubt that. It could be counted as electronic spare parts after all.

Irrelevant but I used to order Dentyl mouthwash regularly from Amazon UK after moving to Germany. It used to arrive in a week and with zero tax, just a little higher than local shipping cost. After Brexit, my first order arrived in 2 months and they charged me tax almost as much as the cost of the whole order. The second ordered never even arrived