On the PC, in Settings, Audio Tab, the networked Mac is shown as “This Mac”, not its real name. Vice versa, on the Mac, the PC is displayed correctly.

@Christiaan, do you mind posting screenshots? There is a lot of places where this can happen, and I don’t see where you are experiencing the bad behavior. 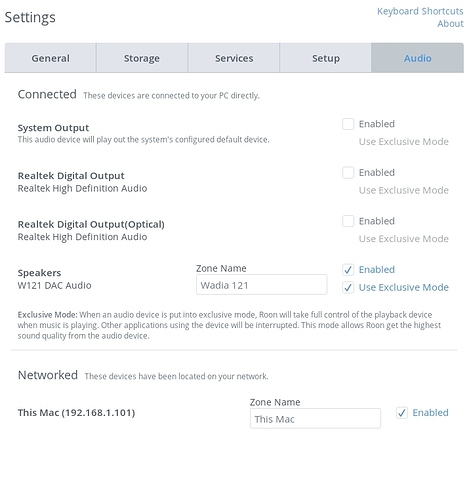 @Christiaan, thanks for the bug report. This will be fixed in the next release.

@Christiaan, this is a “private zone” – it should only be seen by the device running Roon.

The purpose of these private zones is the use case of when someone is using Roon via a remote control, like from a tablet, they can do local listening as if the tablet has a zone, but no one else can play on that tablet.

Note, private zones are meant for transient devices, and not meant to be used as permanent infrastructure. We are going to offer a software RoonSpeakers implementation in the future for more permanent software driven zones, but thats not released yet.

@brian’s fix just removes the private zones from the list in the audio settings.

Thanks Danny, that makes sense.